3:36 p.m. | Updated I wrote on Wednesday that I expected Mitt Romney to expand his modest lead in the South Carolina polls once his victory in New Hampshire was reflected in the surveys there.

Instead, the first poll of the state after New Hampshire suggests just the opposite and shows Mr. Romney’s lead contracting in South Carolina, although I would urge a lot of caution in interpreting it.

The poll, an automated survey from InsiderAdvantage, was conducted on Wednesday and shows Mr. Romney with 23 percent of the vote, just 2 points ahead of Newt Gingrich at 21 percent. The poll has Rick Santorum and Ron Paul tied for third place at 13 percent, with Jon M. Huntsman Jr. having moved ahead of Rick Perry for fifth place.

Our forecast model is designed to weight polls from after New Hampshire much more heavily than those conducted before it. It also accounts for momentum and calculates that Mr. Romney’s is negative based on this survey. In fact, Mr. Romney’s numbers have been on a decline in South Carolina following an initial “bounce” after his strong showing in the Iowa caucuses. 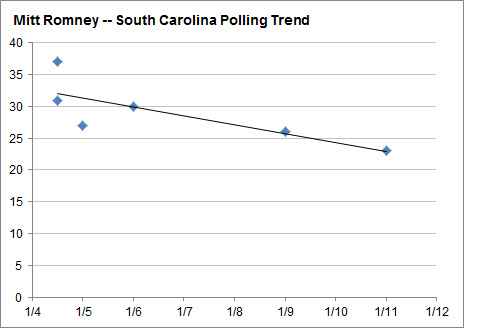 InsiderAdvantage has a mixed track record and rates fairly poorly in the FiveThrityEight pollster ratings, which is one reason to interpret these numbers with some care. In addition, Matt Towery, the head of InsiderAdvantage, formerly served as the head of Mr. Gingrich’s political organization from 1992 until Mr. Gingrich left Congress.

However, another polling firm that rates more highly, Public Policy Polling, said in a series of Twitter messages that it has also detected a tight race between Mr. Romney and Mr. Gingrich in South Carolina, with little evidence of favorable momentum for Mr. Romney following his New Hampshire victory. Public Policy Polling will release its results on Friday.

Confusing matters further is that a poll of Florida, from Rasmussen Reports, did show some gains for Mr. Romney. The poll, conducted on Wednesday, showed Mr. Romney with 41 percent of the vote there, better than he has done in any prior survey of the state. The poll also showed Mr. Gingrich’s numbers on the decline.

The Gallup national tracking poll also had good results for Mr. Romney, with his moving up to 34 percent of the vote, his highest-ever standing in that survey. Only a small portion of Gallup’s interviews were conducted after the New Hampshire results became known, so he could realize some further gains in coming days.

It may be the case that either the South Carolina poll or the Florida poll prove to be outliers once they are taken in the context of other surveys.

There are conflicting threads of momentum in play in the Republican race right now: Mr. Romney won New Hampshire and might get a fresh bounce out of that, but the bounce from his narrow Iowa victory may be fading, and he has endured some tough news cycles of late as Republican candidates have increasingly scrutinized the economic role played by his firm Bain Capital. That can produce erratic results from day to day and from state to state, and can make it especially important to look at an average of several different surveys.

Simply put, this is one time when some patience is called for. We should have a clearer picture of where the candidates stand in a couple of days.

But if the initial results from South Carolina and Florida are confirmed by other pollsters, they would suggest that Florida could play a backstop role for Mr. Romney, in somewhat the same way that New Hampshire did for him relative to Iowa. In addition to having somewhat more heterogeneous demographics than South Carolina, Florida is a much larger state that is much more expensive to advertise in, which could put Mr. Romney’s resource-strained Republican challengers at a disadvantage to him.