The Obama administration, which had long resisted sending weapons to antigovernment forces in Syria’s civil war, has decided to supply them with small arms after concluding that the troops of President Bashar al-Assad have used chemical weapons against them, according to American officials.

The shift in administration policy on Syria seems reflective of public opinion. Polls have consistently shown Americans are deeply wary of the United States becoming involved in the fighting in Syria. But they also show that public support for intervention increases sharply under circumstances where it is confirmed that the Assad regime used chemical weapons.

Polls that have asked whether the United States ought to get involved in Syria — rather than whether the United States simply has the responsibility to — have found similar numbers: A Gallup poll from late May found that 24 percent supported intervention. Just 17 percent supported intervention in a survey conducted in December by ABC News and The Washington Post.

Fewer surveys have asked respondents to suppose that the Assad regime used chemical weapons, but the ones that have found support for intervention increased substantially. 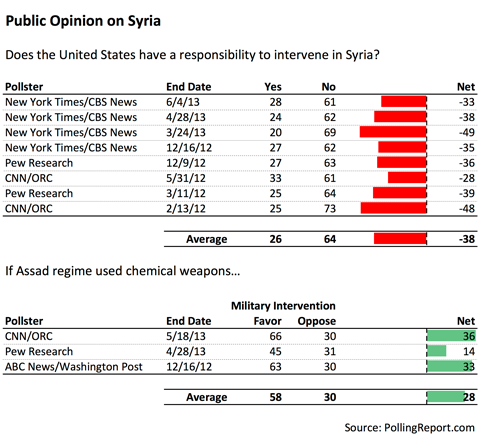 According to an average of the three surveys in the PollingReport.com database that asked, 58 percent of adults said they would support military intervention if it were confirmed that the Assad regime had used chemical weapons either on antigovernment forces or on civilians. (It remains to be seen, of course, whether public support for military intervention will actually increase now that such a confirmation has come.)

The present course President Obama has chosen — sending small arms and ammunition to antigovernment forces — was supported by 41 percent of adults in the CNN survey from December. A Pew Research poll from around the same time found that just 24 percent of adults favored sending “arms and military supplies to anti-government groups in Syria.”