Compared to previous presidents, however, Mr. Obama’s post-election approval bounce has been relatively meager. Most recent presidents — whether they were running for re-election or retiring and whether they won or lost — received a larger boost to their approval ratings after Election Day than Mr. Obama, according to an examination of polling by Gallup, which has been testing presidential job approval much longer than any other polling firm.

A comparison of the last Gallup poll conducted before each presidential election since 1952 to the first Gallup poll in the field entirely after the election shows that incumbent presidents have seen their net job approval (the percentage of people who approve minus the percentage that disapprove) jump by an average of six percentage points.

Mr. Obama’s net job approval improved by only two percentage points right after the election, according to Gallup. Fifty-two percent of adults approved of Mr. Obama’s performance in Gallup’s surveys both immediately before and after the election, but the share of adults who disapproved dropped from 44 percent before to 42 percent after (those numbers largely match an average of all polls since Election Day). 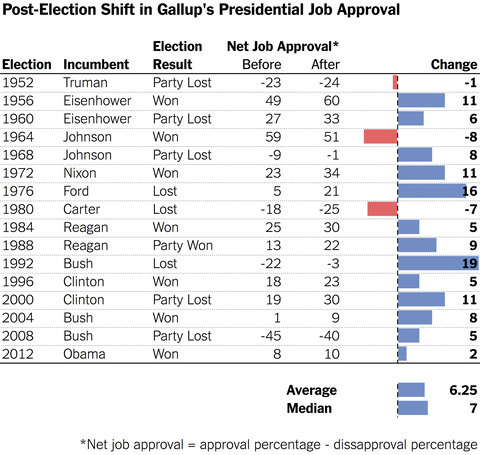 A quick methodological note: Gallup conducted polls much less frequently before 1984. Often, its final pre-election poll was conducted weeks or sometimes months before the election. In addition, there are only 16 elections in the sample. Accordingly, treat the data over all and particularly before 1984 with caution.

In 13 of the past 16 presidential elections, the incumbent has seen his job approval ratings improve. Only three presidents, all Democrats, have seen their numbers deteriorate: Harry Truman, Lyndon B. Johnson and Jimmy Carter.

The outcome of the election has made little difference. It seems that while everyone loves a winner, everyone loves a loser a bit more. The two largest post-election approval bounces belong to losing candidates: Gerald Ford in 1976 and George H. W. Bush in 1992. Mr. Bush, after failing to win a second term, saw his net job approval jump by 19 percentage points just after Election Day.

Losing candidates, including presidents who did not run but whose party lost, received a seven percentage point bounce, on average. In the eight instances where a president was re-elected or where his party kept the White House, the average post-election approval bounce was roughly five percentage points.

Mr. Obama, of course, has no more elections to worry about. But a president’s approval rating is one indication of his political clout and can affect his ability to dictate the agenda in Washington.

As negotiations heat up between the Obama administration and Congress over how to resolve the looming fiscal crisis, for instance, Mr. Obama has decided to make his case outside the Beltway for raising tax rates on high-income earners, hoping to pressure Congress indirectly.

Mr. Obama has more political capital having won re-election, rather than negotiating a fiscal cliff resolution as a lame duck president. But his hand might have been even stronger had he received a more average post-election approval bounce.

But the era of large post-election approval bounces may be receding. In the four most recent elections, the bounce narrowed in each successive cycle. It is too soon to know if this is a real trend, but in an age with more hardened partisan lines and fewer true swing voters, there may be less potential for a post-election honeymoon.

The shift in Mr. Obama’s net job approval is the second smallest — positive or negative — in 60 years, behind only Truman’s one point decline in 1952.

A version of this article appears in print on 12/02/2012, on page A30 of the NewYork edition with the headline: Obama’s Bounce Not as Big as Predecessors’.