I frequently cite the political futures market Intrade, where people can place bets on everything ranging from the likelihood that Charlie Sheen will get arrested to the identity of the next president. Sometimes, however, bettors at the market settle on odds that seem highly implausible.

One such example: right now, Intrade bettors give former Utah Governor Jon Huntsman a 15 percent chance of winning the Republican nomination. That’s barely lower than Tim Pawlenty, who is assigned a 19 percent chance.

Polls suggest, however, that Mr. Huntsman is likely to be an unacceptable choice for many Republican voters.

Several recent surveys have asked Republican voters for their opinions of each of the individual candidates — whether they view them favorably or unfavorably, and how likely they are to consider voting for them. These questions may provide more insight into the upside and downside potential of each candidate than those which simply ask Republicans to designate their first choice.

We can take a composite of six recent surveys to develop something I’ll call the Unacceptability Index: a measure of how many Republicans are unlikely to vote for the candidate under almost any circumstance. In order to correct for differences in name recognition, the index is formulated from responses solely among those Republicans who expressed an opinion about the candidate. (That is, “don’t know” and “unsure” responses are tossed out.)

The six surveys used in the index — three from key early voting states, and three national polls — are as follows:

The Unacceptability Index reflects an average of these six figures among Republicans who have formulated an opinion about the candidate. 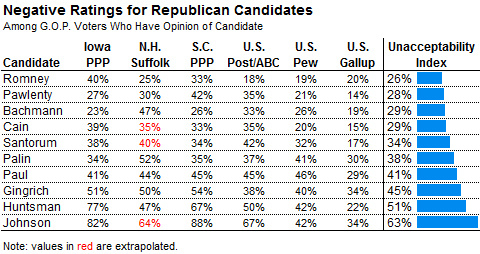 The most broadly acceptable Republican candidate, for the time being, is Mitt Romney. Of Republicans who expressed an opinion about him, an average of 26 percent had a negative view. There is one trouble sign, however, which is that Mr. Romney’s unfavorable rating is higher in Iowa than elsewhere in the country.

Tim Pawlenty also polls well, with an Unacceptability Index of 28 percent. Mr. Pawlenty’s strategy is quite explicitly to be a consensus choice — acceptable both to moderate and conservative factions of the Republican party — and these results suggest he’s made some progress toward that goal.

Two insurgent candidates, Michelle Bachmann and Herman Cain, also get good numbers; each one has an Unacceptability Index of 29 percent. These figures are better than those for Sarah Palin, for whom an average of 38 percent of opinions were negative. It’s even less clear that Newt Gingrich is viable. His Unacceptably Index is 45 percent, with especially poor numbers in the state polls.

But polling worse than Mr. Gingrich was Mr. Huntsman. About half of the views Republicans expressed about Mr. Huntsman were negative, producing an Unacceptably Index of 51 percent.

Mr. Huntsman is considerably less well-known than most of his rivals — between 60 and 70 percent of Republicans remain unfamiliar with him — so there’s a chance that these figures will improve as he introduces himself to more voters. He does have several strengths, including support within Republican establishment circles, an intriguing resume, and considerable charisma.

It doesn’t seem likely to me, however, that the poor initial impressions are a fluke. Instead, they almost certainly reflect the fact that Mr. Huntsman has taken a number of positions that are bound to be unacceptable to large swaths of the Republican electorate. Among them are expressing support for Barack Obama’s 2009 stimulus package, endorsing an individual mandate for health insurance, and securing Utah’s participation in a regional cap-and-trade program. Mr. Huntsman also holds a moderate position on gay marriage, having endorsed civil unions for same-sex couples. And he served as President Obama’s ambassador to China.

Many of the Republican candidates have taken at least one position that will give them problems with the conservative base — for instance, Mr. Romney’s passage of a Massachusetts health care bill similar to Barack Obama’s, Mr. Pawlenty’s endorsement of cap-and-trade, and Mr. Cain’s backing of the 2008 federal bailout. But none of the major contenders have the plethora of moderate positions that Mr. Huntsman has held. If these initial numbers hold as Mr. Huntsman continues to introduce himself to the electorate, and half of Republicans consider him an unacceptable alternative, his chances of winning the nomination will be near zero.

In short, numbers like these should argue strongly against placing Mr. Huntsman in the top tier of candidates along with those like Mr. Romney and Mr. Pawlenty. Rather, I suspect that his odds of winning the nomination are no better than some of the “insurgent” candidates like Ms. Bachmann, or candidates like Rick Perry and Paul Ryan who are unlikely to enter the race but would be more acceptable to the Republican base if they did.