This morning, voting began in Iran’s tenth Presidential election, which pits incumbent Mahmoud Ahmadinejad against three Guardian Council approved challengers. The main contest is between the more conservative President Ahmadinejad, and former Prime Minister Mir-Hossein Mousavi, who has billed himself as a moderate reformist. The two dark horse candidates, former Iranian Revolutionary Guard commander Mohsen Razaei and former Majlis (parliament) speaker Mehdi Karroubi, have each campaigned since the approval process ended on 20 May, but without making enough progress for us to expect an upset.

Over time, Iran’s Presidential elections have gotten progressively more competitive and pluralistic, as more candidates have been approved to participate, more competitive vote totals have encouraged challengers, and universal voting rights have persisted.

The above chart begins in 1985, when the first incumbent Presidential reelection was held after the 1979 revolution. The 1980 and 1981 (first and second) elections were largely impacted by extreme events: an assassination, a removal from office by the Supreme Leader, etc.

Over time, turnout has increased, while the winning share of the vote has dropped significantly, as the elections have become more competitive. In 2005, for the first time, a run-off between former President Rafsanjani and now-incumbent Pres. Ahmadinejad was forced by the first round vote percentages, where the first round winner Rafsanjani earned just 21.1%, and Ahmadinejad 19.4%. 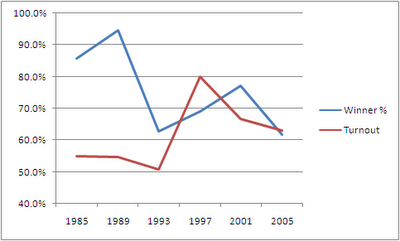 In the 2009 election, even though Ahmadinejad has gotten a bump from his incumbency, the momentum for his challengers has been growing. Many observers are predicting another run-off for the Presidency after today’s voting to be required, in the case that no candidate reaches 50% plus one.

Fortunately, opinion polling has been quite extensive in the run-up to today’s election. Unfortunately, much of it has been focused on Tehran, has included dubious, push-polling language, or includes candidates for office that are not running or neglects some that are. Luckily, however, we can have a look at overall trends since earlier this year, and get a sense of what the momentum, if not the exact figures, might look like for today’s voting, and the possible run-off.

While the numbers have been extremely variable between polls, and making a decision about what polls to include or exclude from aggregating in a case like Iran is nearly impossible, we can see a basic cycle that can be corroborated by anecdotal news evidence over the last two months. The incumbent has been largely held below a majority, which in the Iranian system is significant for two reasons. First, an absolute majority is needed, without which a runoff is certain. In addition, if Ahmadinejad fails to earn a majority, he will be the first incumbent President running for reelection to do this. 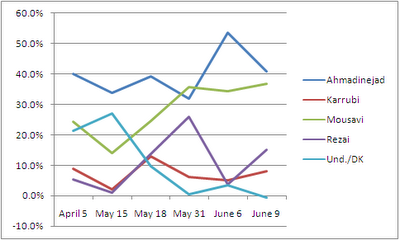 In summary, the Iranian system is slowly maturing, with more a more competitive and multi-candidate system. The candidates are still restricted to the mainstream approved by the Guardian Council, but this is certainly no one-party system. In fact, the Guardian Council is quite reminiscent of the party nominating conventions that have long been the deciding factor for the “mainstream” candidates in the United States.

It is clear that the reformist Mousavi has a real chance for victory, though likely not in a first-round scenario. Given their history of reelecting presidents, this would be a new direction for post-revolutionary Iran. That said, the wide unpopularity of Ahmadinejad’s handling of the economy in Iran, and the suggested weakening of nuclear ambitions rhetoric as a tool for political distraction away from bread and butter issues for the 46 million Iranian voting-age citizens indicates that a chance may be on the way.

For the Obama administration, this is an important day – a chance to see if a more congenial approach to Iran might provoke a more reform-minded Presidency in Iran by making anti-Americanism a less powerful mobilization tool. We will see in time how successful this is.
—
Renard Sexton is FiveThirtyEight’s international columnist and is based in Geneva, Switzerland. He can be contacted at sexton538@gmail.com