A new survey by Penn, Schoen and Berland Associates for the AARP reveals widespread uncertainty about the nature of the “public option” — a government-run health insurance policy that would be offered along with private policies in the newly-created health insurance exchanges. Just 37 percent of the poll’s respondents correctly identified the public option from a list of three choices provided to them: 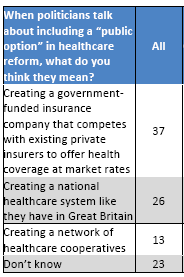 It is tempting to attribute these results to attempts by conservatives to blur the distinctions of the health care debate. And surely that is part of the story. But it may not be all that much of it. Democrats were more likely than Republicans to correctly identify the public option in this poll, but not by all that wide a margin — 41 percent versus 34 percent. Meanwhile, 35 percent of Republicans thought the public option refers to “creating a national healthcare system like they have in Great Britain” — but so did 23 percent of Democrats.

This should serve as something of a reality check for people on both sides of the public option debate. If the respondents had simply chosen randomly among the three options provide to them, 33 percent would have selected the correct definition for the public option. Instead, only 37 percent did (although 23 percent did not bother to guess). This is mostly a debate being had among policy elites and the relatively small fraction of the public that is highly knowledgeable and engaged about health care reform; for most others, the details are lost on them.

This is also why relatively small changes in wording can trigger dramatic shifts in support for the public option, which has been as high as 83 percent in some polls and as low as 35 percent in others depending on who is doing the polling and how they’re asking the questions. You don’t see those sorts of discrepancies when polling about, say, gay marriage or the death penalty, where the options are a little bit more self-evident.

Unfortunately, some liberal interest groups may be contributing to the confusion as well, with this poll being a prime example. When Penn, Schoen and Berland ask people to identify the public option, they describe it — correctly — as offering health insurance at “market rates”. However, when they ask people how they feel about the public option, a different concept is introduced:

“Starting a new federal health insurance plan that individuals could purchase if they can’t afford private plans offered to them.”

Seventy-nine percent of the poll’s respondents — including 61 percent of Republicans — say they’d support this proposal. But it seems to be a very different proposal from the “public option” that Penn, Schoen and Berland took so much care to define, or the one that is actually being debated before Congress. Rather than offering health insurance at “market rates”, the public option has been transformed in this question into a sort of fallback policy for people who are priced out of the market. Moreover, the term “government” has been replaced by the softer but more ambiguous term “federal”.

More generally, there seems to be a sort of arm’s-race on both sides of the debate to conduct crappy, manipulative polls on health care reform, and the public option in particular. This poll belongs in the ‘crap’ pile, as do most of the others. Defenders of the public option, however, should have little to fret about: the most neutrally and accurately-worded polls on the public option — these are the ones from Quinnipiac and Time/SRBI — suggest that their position is in the majority, with 56-62 percent of the public supporting the public option and 33-36 percent opposed.