A Daily Kos/Research 2000 poll released last week has rightly received a lot of attention for its stark rendering of the ‘enthusiasm gap’. Whereas 81 percent of Republicans, the poll found, plan to definitely or probably vote in the 2010 midterms, the percentage is just 56 percent among Democrats. If those percentages hold up, the Democrats’ advantage on the generic ballot is flipped from a +5 all the way to a -4, which could translate to catastrophic losses in the House.

The racial demographics, however, are perhaps even more striking. Whereas 68 percent of white voters told Research 2000 they were definitely or probably planning to vote in 2010, just 33 percent of black voters did. Although whites have almost always turned out at greater rates than blacks, the racial gap has never been nearly that large, and indeed was at its smallest-ever levels in 2008 with Barack Obama on the ballot. 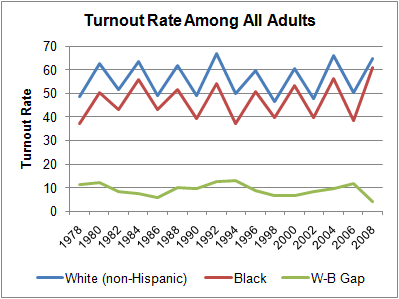 Looked at a bit differently — as the percentage of electorate that whites and black make up each cycle — the gap is a bit larger than that. But it’s certainly nowhere near the numbers identified by Research 2000. Their ‘definitely/probably’ electorate would be 80.4 percent white, 8.2 percent black, 9.5 percent Hispanic, and 2.0 percent ‘other’. Contrast that to the situation in 2008, where the electorate was 74 percent white, and 13 percent black, and you can see why Democrats have such problems.