A new Gallup/USA Today poll finds significant doubt about whether Donald Trump, the real estate mogul and television personality who is considering a bid for presidency, was born in the United States.

No, this poll is not a joke. We’re several weeks past April Fools’ Day. But it’s one that should encourage us to proceed more cautiously when we see similar numbers reported for President Obama.

There aren’t any good reasons to doubt that Mr. Trump, who has furnished a copy of his birth certificate, was born in the United States.

Perhaps there are some bad reasons. Two of Mr. Trump’s three wives were foreign-born. And Mr. Trump was born in Queens. I don’t know if you’ve been to Queens, but it certainly ain’t Kansas. (Although it has much better food.)

But seriously: I’m not ready to believe that all of the 7 percent of Americans who said they thought Mr. Trump was born abroad — or the much larger fraction who expressed some doubts about his birthplace — were being entirely earnest with the pollsters. Instead, they were giving a stupid answer to a stupid question.

That’s not to say that Gallup should not have asked the question; it does form something of a control group. When the same question was asked about Mr. Obama, doubts were somewhat greater: 24 percent rather than 7 percent said they thought the president was probably or definitely born elsewhere, while 56 percent rather than 63 percent thought he was probably or definitely born here. 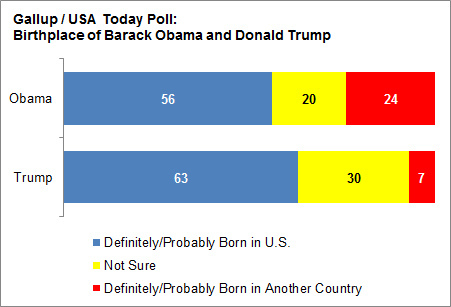 But the results aren’t all that different. There was barely any discrepancy, for instance, in the fraction of people who were willing to state that the candidate was definitely born in the United States: 38 percent for Mr. Obama, versus 43 percent for Mr. Trump.

At least some fraction of the people who tell pollsters that Mr. Obama was foreign-born are probably kidding around, just as they are when the same question is asked of Mr. Trump. I’d imagine that you could substitute virtually any name in the place of Mr. Trump or Mr. Obama — Bill Clinton, or Ronald Reagan, or Oprah Winfrey, or Dwight D. Eisenhower, or Mark Zuckerberg, or Sarah Palin — and find that at least a few Americans reported themselves to be “birthers.”

The incidence of birtherism also tends to be higher in automated surveys, like those put out by Public Policy Polling. That could be because automated surveys tend to draw a less representative sample, with more extreme partisans and ideologues than exist in the real world, or because respondents feel especially inclined to have “fun” with the pollsters when they just have to push buttons rather than talk to another human being.

Clearly, some people do believe the lies and distortions about Mr. Obama’s birthplace; I’m just not sure that the fraction is as great as overly literal readings of these surveys might suggest. I’m also not sure that news organizations are necessarily doing all that much good by constantly debunking the rumors, which both legitimizes the topic as a point of discussion, and which may encourage some conservatives to say they have doubts about Mr. Obama’s birthplace in order to poke fun at the press. If you’re a mainstream conservative who is firmly convinced that Mr. Obama was born in Hawaii, you might nevertheless find it amusing when CNN credulously sends some of its top reporters to Honolulu to investigate the story.

I also wonder whether there isn’t an element of this in polls of Republican primary voters, which have shown Mr. Trump’s numbers on the rise. Some voters who don’t have any particular doubts about Mr. Obama’s birthplace might nevertheless appreciate that Mr. Trump is “in on the joke” by raising questions about it. The question that will determine whether Mr. Trump can remain a viable candidate is whether those voters are laughing with Mr. Trump or laughing at him.