Libertarianism has been touted as the wave of America’s political future for many years, generally with more enthusiasm than evidence. But there are some tangible signs that Americans’ attitudes are in fact moving in that direction.

Since 1993, CNN has regularly asked a pair of questions that touch on libertarian views of the economy and society:

Some people think the government is trying to do too many things that should be left to individuals and businesses. Others think that government should do more to solve our country’s problems. Which comes closer to your own view?

A libertarian, someone who believes that the government is best when it governs least, would typically choose the first view in the first question and the second view in the second.

In the polls, the responses to both questions had been fairly steady for many years. The economic question has showed little long-term trend, although tolerance for governmental intervention rose following the terror attacks of Sept. 11, 2001. The social libertarian viewpoint — that government should not favor any particular set of values — has gained a couple of percentage points since the 1990s but not more than that. 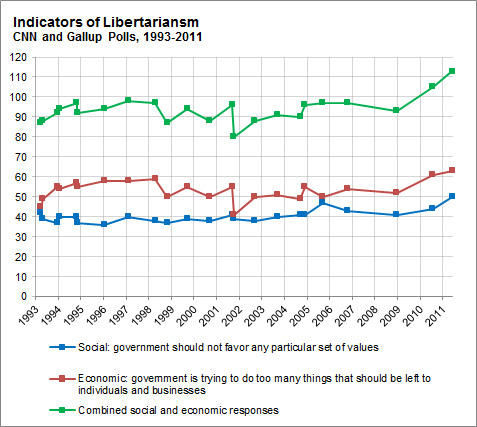 Whether people are as libertarian-minded in practice as they might believe themselves to be when they answer survey questions is another matter. Still, there have been visible shifts in public opinion on a number of issues, ranging from increasing tolerance for same-sex marriage and marijuana legalization on the one hand, to the skepticism over stimulus packages and the health-care overhaul on the other hand, that can be interpreted as a move toward more libertarian views.

The Tea Party movement also has some lineage in libertarian thinking. Although polls suggest that many people who participate in the Tea Party movement have quite socially conservative views, the movement spends little time emphasizing those positions, as compared with economic issues.