The 2010 World Cup is shaping up to be South America’s cup. None of the five CONMEBOL teams has lost yet, and Maradona’s side ran an impressive 4-1 goleada against South Korea this morning. Uruguay will play a grudge match against Mexico on Tuesday to see who can avoid facing Argentina in the knockout round.

Money may count for something when it comes to fútbol. The five teams this year are from the continent’s five southernmost countries, which, incidentally, are among its richest and (excluding Paraguay) rank highest on the human development index. 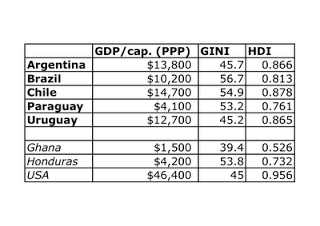 Each of the Southern Cone countries was governed by a repressive military dictatorship at some point during the past forty years. (These Juntas received US assistance under Operation Condor.) Now, Argentina, Brazil, Chile and Uruguay are all successful democracies, and each has experienced a transfer of power through free and fair elections. Their economies have also been linked together in the Mercosur free trade association, and relations with each other are (generally) good. They all have a history of high income inequality, measured by high GINI coefficients. Though supposedly electing a series of “leftist” leaders, the four have pursued different paths to political and economic development.

Chile
Chile could be called the world’s only island state that’s not an island. Its odd geography–a narrow band of inhabitable land between the high Andes and the Pacific Ocean, with icy fjords to the south and the world’s driest desert to the north–caused it to develop in isolation from its neighbors. Until Pinochet’s 1973 coup, it had a proud track record of democratic government. After the coup, Pinochet invited the Chicago Boys to impose a policy of free-market economics and privatization–backed up by military force, torture and disappearances.

Chile returned to democracy in 1990, but the new, center-left Concertación government largely kept liberal economic policies in place. Pinochet’s detention in the UK in 1998 shored up the rule of civilian government, and allowed the country some retrospection. Economically, Chile continued to post impressive growth through the 1990s and 2000s, largely due to a boom in copper and other natural resources. A succession of Concertación presidents used this resource wealth to pursue social programs aimed at reducing inequality. Chile signed a free trade agreement with the U.S. in 2003.

Socially, Chile remains a highly conservative, Catholic country (divorce was only legalized in 2005, and abortion is illegal under all circumstances). Despite this, Chileans elected the socially liberal (and self-described agnostic) Michelle Bachelet as president in 2006. Bachelet allowed the morning-after pill to be dispensed free of charge, and appointed more women to cabinet positions.

Chilean presidents cannot serve consecutive terms, and this January, billionaire businessman Sebastián Piñera succeeded the popular Bachelet. Piñera was a elected in a runoff against former President Eduardo Frei Ruiz-Tagle, while third-party “change” candidate Marco Enríquez Ominami had a good showing in the first round. Piñera is the first conservative president since Pinochet’s rule, and the first democratically-elected conservative in over half a century. Before taking office, he renounced any support of the Pinochet regime. Piñera is likely to pursue similar economic policies to Concertación, although the earthquake that hit the country the week before he took office will make recovery his top priority.

Uruguay
As a country of just over 3 million people, Uruguay is wedged in between two large and powerful neighbors. It also elected a new president in 2009, as José “El Pepe” Mujica succeeded Tabaré Vázquez–both of the Broad Front party. Though center left, Mujica and Vázquez have largely pursued pro-business policies, and rejected the populist style of Evo Morales and Hugo Chávez. Under Vázquez, Uruguay also passed Latin America’s first civil unions law for gay and lesbian couples.

Uruguay’s foreign relations remain generally good, though relations with Argentina are strained over a paper mill on the Uruguayan side of the river the two countries share. Argentina claims that construction of the Botnia plant violated the treaty governing the use of the river, and thousands of Argentine piqueteros have blocked access to bridge crossings. The International Court of Justice ruled last April that the construction was indeed in violation of Uruguay’s international obligations, but that the plant may continue to operate.

Brazil
Brazil has been the “country of the future” for at least sixty-five years; the joke is that it will be forever. Now, it looks as though that future may have arrived. Brazil is a leader in biofuels, a giant in agricultural exports, and producer of aircraft. The discovery of vast offshore oil reserves could make it a top petroleum exporter as well. Brazil will take the world stage in the coming decade as it hosts the 2014 FIFA World Cup and the 2016 Summer Olympics.

Unlike largely-white Argentina and Uruguay, Brazil is a truly multiracial country, and economic inequality has always had a racial tinge. The political class has historically come from the white, landed elite. When President Luiz Inácio Lula da Silva was elected in 2002, the reaction was polarized. Foreign investors and upper-class Brazilians feared that the former labor leader would adopt Chávez-style nationalizations. Poorer, marginalized Brazilians–many of them black and brown–hoped that Lula’s own humble origins would make him a different sort of leader. As president, Lula pursued a policy of pragmatic social development. He increased the Bolsa Família and Fome Zero programs to provide conditional cash transfers and reduce hunger.

Lula’s foreign policy has been equally pragmatic, maintaining good relations with the United States while keeping hemispheric leaders like Chávez and Morales close. Brazil’s increasing stature as one of the BRIC countries has led it to play a more active role in geopolitics. It recently ruffled State Department feathers by voting (alongside Turkey) against a new round of sanctions for Iran. The vote was one part genuine desire for something new with Iran, one part national economic considerations, and one part showing the world that Brazil was now one of the big boys.

Brazilian voters will elect a new president this fall to replace the term-limited Lula. Frontrunners are José Serra, the conservative governor of São Paulo state, and Dilma Rousseff, from Lula’s Workers’ Party. Rousseff would become Brazil’s first woman president, and likely keep Lula’s policies intact. Serra, favored to win at this point, would be unlikely to alter social programs too much, but could pursue a different, more US-aligned foreign policy.

Argentina
While its neighbors have adopted a consensus of pro-growth+social development, Argentina is the odd man out. President Cristina Fernández de Kirchner continues to push policies of economic isolationism. These isolationist currents have a long basis in Argentine history. At the turn of the last century, Argentina had become one of the wealthiest countries in the world, due almost entirely to grain exports to Britain. As the global depression hit the UK in 1930, Argentina suddenly had no one to sell to. A long cycle of military coups and popular unrest began, from which the country has only recently recovered.

The Perón government of the ’40s and ’50s was deeply mistrustful of any foreign powers (the West and the USSR alike), and believed that Argentina’s national security depended on economic, military and food self-sufficiency. Argentina’s Junta of the 1970s and ’80s–unlike Pinochet–also promoted a closed, state-guided economy. It was not until the Menem administration of the 1990s that policies of free-trade and privatization began to take root in Argentina.

Unfortunately, Menem’s economic policies ended rather badly: peso-dollar convertibility proved unsustainable, and the Argentine economy collapsed in 2001. President Néstor Kirchner (husband of the current president) took office in 2003 promising a hypercorrection, and was guided by deep skepticism of international institutions and especially President Bush (with some good reason). The isolationist tendencies of both Presidents Kirchner can best be understood through a historic lens: we’ve tried free trade, we’ve tried privatization, we’ve tried engagement with Western markets, and time and again they’ve led to nothing but trouble.

Argentina will not have a presidential election until 2011, and it is expected that Mr. Kirchner will run this time. In the meantime, President Fernández must maintain an uneasy cohabitation with a broad opposition coalition that controls Congress. Argentina is also generally more socially liberal than its neighbors, and may soon become the first Latin American nation to legalize gay marriage.

During the past decade, it has been popular for [North] Americans to speak of the new Latin American left–whether for it or against it. (Oliver Stone has a new movie that does just that; he’s for it.) In reality, there are many shades of left, each tailored specifically to unique political and historical issues in each country. Latin American countries have complicated histories of racial classifications, land-based oligarchies, and tensions between the few and the many. Different leaders offer considerably different ways to overcome these histories. Any political category that lumps both Hugo Chávez and Michelle Bachelet together is probably too broad to be useful.

But as the wealthy four, Argentina, Chile, Brazil and Uruguay have more than the World Cup in common. Notwithstanding the Botnia issue, relations among the Southern Cone nations are as strong as they’ve ever been. Thirty-two years ago, Argentina and Chile nearly went to war. Now the only wars imaginable are on the cancha.