The Republican campaign for president will technically continue into May and June, but the primary in Wisconsin on Tuesday may be the last act of its competitive stage.

Polling in the state shows Mitt Romney with a solid — though not insurmountable — lead, and a win in Wisconsin, coupled with expected victories in Maryland and Washington, may move him from front-runner to presumptive nominee.

Voters in Wisconsin have a penchant for applying a final coat of paint onto winning primary campaigns. The state marked an unofficial pivot in the 2008 Republican race. Senator John McCain won the state decisively. His victory speech began,

“Thank you, Wisconsin, for bringing us to the point where even a superstitious military aviator can claim with confidence and humility that I will be our party’s nominee for president of the United States.”

Wisconsin’s place at the junction between primary and general election is partly a function of its place on the nominating calendar, but even more so its demographics, which rarely give any single candidate a built-in advantage. The level playing field tends to magnify the impact of a victory in the state, cementing a winning narrative or providing a last gasp to a struggling underdog.

Both Mr. Romney and Rick Santorum can point to aspects of Wisconsin’s profile that should prove favorable to them. Wisconsin has fewer evangelical Christians than states where Mr. Romney has struggled. In 2008, only about 4 in 10 Republican primary voters described themselves as born again or evangelical. However, the same year, 41 percent of voters came from rural communities, a higher number than other Midwestern states — an advantage for Mr. Santorum, who has done very well among rural voters.

To better understand Wisconsin’s G.O.P. electorate, FiveThirtyEight spoke with Dennis L. Dresang and Charles Franklin, both of whom are professors in the political science department at the University of Wisconsin-Madison.

Republican voters are concentrated in eastern Wisconsin, and particularly in the Southeast. The bulk of the state’s G.O.P. electorate lives in suburban communities to the west of Milwaukee, in Milwaukee County and Waukesha County. 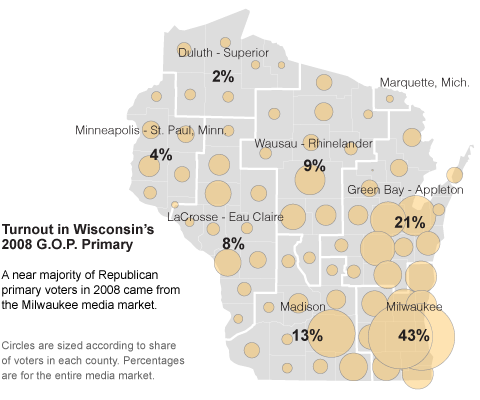 Generally, conservative voters in this region are typical of suburban voters in other states. They tend to be well-educated and more affluent than Republicans elsewhere in Wisconsin.

But the western suburbs of Milwaukee are unusual in several respects. The area is much more heavily Republican than other suburbs, and the voter turnout in Waukesha tends to be very high. Southeast Wisconsin Republicans are also more socially conservative and somewhat less affluent than suburban Republicans in other Midwestern industrial states, like those in the suburbs of Chicago (DuPage County, Ill.) or the northern suburbs of Detroit (Oakland County, Mich.).

Mr. Romney won DuPage and Oakland nearly 2 to 1 over Mr. Santorum. All else being equal, Mr. Santorum should be able to keep the vote in Waukesha County closer than that. But if he plans on achieving what would be a significant upset in Wisconsin, Mr. Santorum will need to keep Mr. Romney’s margins in Waukesha and Milwaukee counties as slim as possible. If Mr. Romney is running up the kinds of margins he did in Oakland and DuPage counties, it may be a sign the conservative rank-and-file is coalescing around him, and he will likely exceed his polling-based projection.

Traveling west from Waukesha County, Republican territory ends and the pendulum swings to the other end of the political spectrum. Madison, the state capital, which is home to the largest branch of the University of Wisconsin system, is overwhelmingly Democratic. But Democrats can vote in Wisconsin’s primary, and Wisconsinites are known for political activism, raising the specter of mischief-making.

Outside of the southeast, the next largest chunk of Republican votes will come from the region that begins north of Milwaukee and stretches up to Green Bay, bounded by Lake Michigan in the east and Route 41 in the west.

Mr. Santorum will need to win the counties in this region in order to compete statewide. But relatively moderate Republican voters in the area are numerous enough that if Mr. Romney is having a good night over all, he could easily win most of the counties in east-central Wisconsin, particularly Winnebago County and Brown County, home to Oshkosh and Green Bay, respectively.

The rest of Wisconsin is sparsely populated, rural and more religious. Specifically, the region around Eau Claire in the west is likely to be where Mr. Santorum finds the greatest level of support, helped by the region’s mix of evangelical Christians and socially conservative Catholics (as you can see in the maps below, this is was Mike Huckabee country in 2008). He will need to significantly outperform Mr. Romney in Eau Claire County and the surrounding counties to counterbalance Mr. Romney’s strength in the Southeast.

The Eau Claire region is the source of Wisconsin’s reputation as the nation’s preeminent dairy producer (although dairy has a presence throughout most of the state). Wisconsin is the nation’s top cheese producing state and the No. 2 producer of both milk and butter, and the bulk of that production comes from the Eau Claire area. 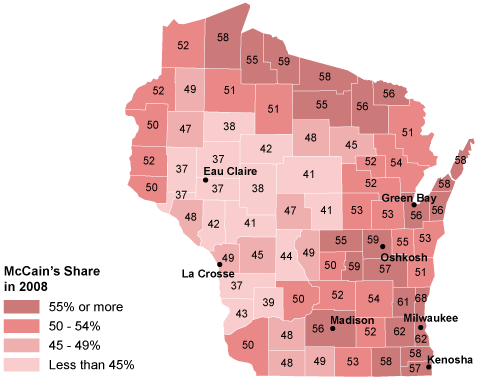 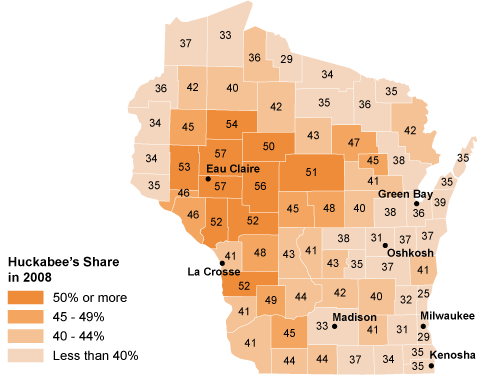 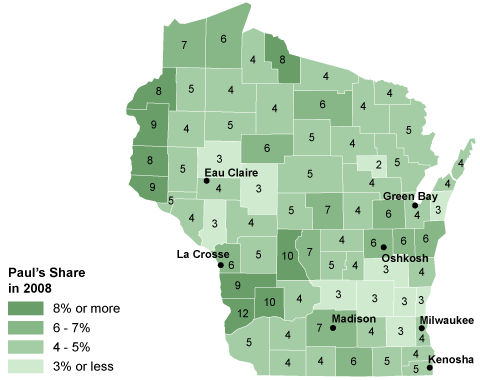