After a long hiatus, our “Political Geography” feature is back for the Wolverine State. The goal, as always, is simply to give you a sense of who is likely to vote in Michigan’s Republican primary and where those voters live.

FiveThirtyEight reached out to a couple of local experts to learn the lay of the land, including John Truscott, the president of the strategic communications firm Truscott-Rossman, who served as communications director and press secretary to former Gov. John Engler, and Jill Alper, a Democratic strategist who works at the public affairs firm Dewey Square Group. 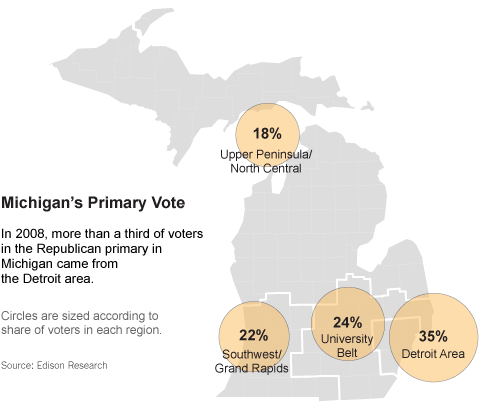 Thirty-five percent of voters in Michigan’s 2008 Republican primary came from the Detroit area: Wayne County, home to Detroit, and Macomb and Oakland Counties to the north of the city.

The continuing exodus from Detroit has swelled the populations of both Oakland and Macomb. Oakland County is well-off and white collar. Its Republican voters are fiscally focused and more moderate on social issues.

If Mitt Romney wins Michigan, Oakland County may be his foundation; he won 47 percent of the vote in there in 2008. The Romney name is well-known in the area. His brother Scott Romney, a prominent lawyer, lives in Birmingham.

Macomb County has somewhat lower income levels and a heavier concentration in manufacturing jobs. Although Mr. Romney won 45 percent of the vote there in 2008, the area’s blue-collar demographic may provide fertile territory for Rick Santorum, and how he fares in Macomb will be a good indicator for his statewide prospects.

Indeed, Macomb and Oakland are classic swing counties in both primaries and general elections; Macomb was the county that gave rise to the term “Reagan Democrats.” The winner in Oakland and Macomb prevailed statewide in the 2010 Republican primary for governor (Rick Snyder), and the 2008 Republican primary for president (Mr. Romney). In the 2010 general election, Mr. Snyder beat Virg Bernero, a Democrat, in Macomb and Oakland and was elected governor. In 2008, President Obama won these two counties with 55 percent and also won the state.

Wayne County, dominated by Detroit, is mostly Democratic, but there are Republican areas to the north and west of the city. The voters in these Republican pockets are similar to their party brethren in Oakland County. To the south of Detroit is another area of Republican support. The voters there resemble residents in Macomb more than Oakland. In general, the Republican votes in Wayne County will come from suburban communities.

Anchored by Michigan’s second largest city, Grand Rapids, the southwest of the state is dotted with midsize industrial cities, as well as a few rural farming communities.

The southwest has historically been the most Republican part of Michigan, and is more socially conservative than the rest of the state. Grand Rapids, in Kent County, has a significant population of conservative Christians. Many people in this region have Dutch ancestry, and the Reformed Church in America — an offshoot of the Dutch Reformed Church, which takes a conservative stance on abortion — is prominent there.

Mr. Santorum probably needs to run up a sizable margin in the southwest to win the state. Mr. Romney won the region in 2008, but barely, beating Senator John McCain by just one percentage point. It was also Mike Huckabee’s best part of the state.

The region also includes the state capital, Lansing. Between the state government and the large number of university professors, it is more dependent on public-sector jobs and has weathered Michigan’s deep recession somewhat better than other portions of the state.

Still, the area includes its share of manufacturing towns and has its ties to the automotive industry. Slightly Democratic-leaning in general elections, the university belt is probably somewhat favorable territory for Mr. Romney. But it could also be a source of a few Democratic votes for Mr. Santorum, some of whom may be voting tactically in an effort to prolong the Republican nomination process.

Rural and thinly populated, the north central region of Michigan’s Lower Peninsula has historically voted Republican. The Upper Peninsula, however, has traditionally voted Democratic, somewhat like the far northern reaches of Minnesota and Wisconsin. The congressman who represented the region, Bart Stupak, a Democrat, retired before the 2010 election and was replaced by a Republican.

In the 2008 Republican primary, this area was extremely competitive. Mr. Romney barely edged out Mr. McCain, beating him by just one percentage point, 35 percent to 34 percent. The region could prove to be a wild card again this year. Union membership is especially high in northern Michigan, with many retired United Auto Workers members. But voters are also fairly conservative on social issues, particularly abortion.

The charts below detail county-level results from Michigan’s 2008 Republican primary. Keep in mind, however, that we have seen some shifts in these patterns this year, since Mr. Romney was running to the right of Mr. McCain in 2008 but is generally seen as to the left of Mr. Santorum this year. 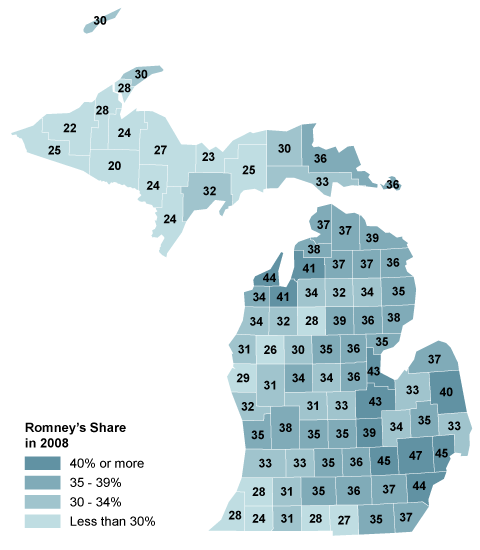 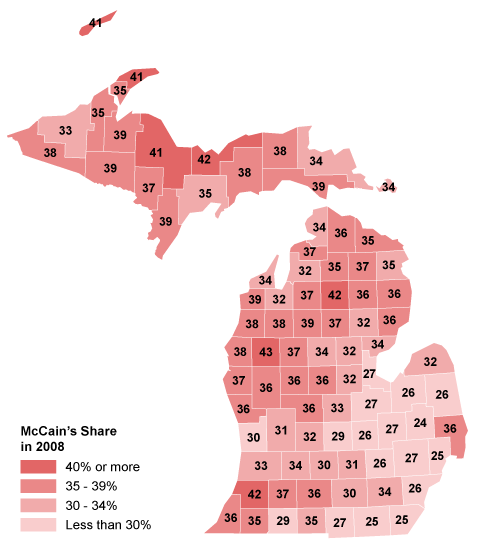 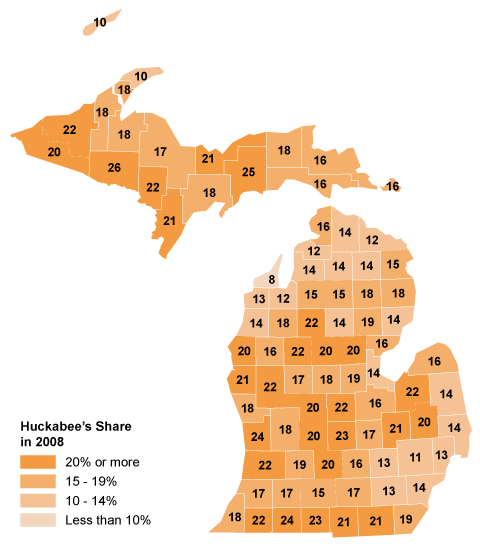 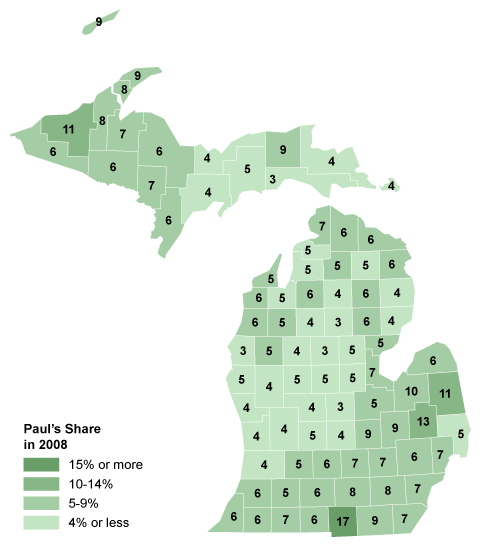 Nate Silver contributed to this article.