Louisiana, where Republicans are holding a presidential primary on Saturday, is a Deep South state with a small twist. The state’s Republican voters are similar to Mississippi’s and Alabama’s, however, there are modest differences that could lead to a substantial electoral difference.

Just 57 percent of primary voters in the state’s 2008 Republican primary identified themselves as born-again or evangelical Christian, a smaller share than in Alabama (80 percent) or Mississippi (83 percent). Catholics made up about a third of the primary vote in 2008, according to exit polls.

Moreover, 59 percent of Republican primary voters in 2008 lived in suburbs, a higher share than other Deep South states that have voted this year.

Mitt Romney, the former governor of Massachusetts, has struggled to win over evangelical voters, and has thrived among Catholics and suburban Republicans. He lost narrowly in Mississippi and Alabama, particularly Mississippi, so these shifts in his favor in Louisiana would seemingly have the potential to put him over the top.

That is the argument being made for why Louisiana represents Mr. Romney’s best (and last) opportunity to win a state in the Deep South.

It is a reasonable argument, yet Rick Santorum has a robust lead in every poll that has been conducted in Louisiana, and FiveThirtyEight’s polling-based forecast gives Mr. Romney just a 6 percent chance of winning the state. Either the polls are wrong, or the makeup of the Louisiana electorate is in some way misleading.

Could the polls be wrong? It is possible, but Mr. Santorum has actually overperformed his polling in other Southern states.

Instead, the contradictory signals in Louisiana arise from the unique political culture in the state, a culture illuminated for FiveThirtyEight by Professor Brian Brox, from Tulane University’s Department of Political Science, and John Diez, the owner and president of Magellan Strategies BR, a Republican-aligned public relations firm based in Baton Rouge that conducts polling. 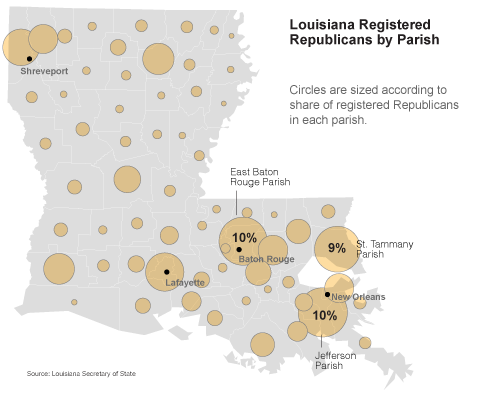 The Northern region of Louisiana is predominantly rural and evangelical Protestant. The region is essentially an extension of the states it borders, Arkansas to the north and Mississippi to the east. Agriculture and the natural gas industry dominate Northwestern Louisiana around Shreveport. Most of the votes Saturday will come from the suburbs of Shreveport, in Caddo Parish and Bossier Parish (Barksdale Air Force Base – where former President George W. Bush landed on Sept. 11 – is in Bossier City).

This is the most conservative region of the state, and it seems certain to throw the majority of its support to Mr. Santorum. In another state, Mr. Romney might have looked to blunt Mr. Santorum’s margins by culling votes from the suburbs of Shreveport or the suburbs of Monroe, in the east.

But this is where we arrive at the first Louisiana curiosity: with the exception of the Southeast corner of the state, social conservatism holds roughly equal sway whether in a rural bayou town or a Shreveport suburb. The typical suburban/rural demarcation on social issues is blurred in Louisiana, Mr. Brox said.

In other words, Mr. Romney’s strength among fiscal conservatives in suburban communities is less of a strength in Louisiana.

While Northern Louisiana is mostly Protestant, the southern half of the state is more Catholic, especially the Cajun parishes in the southwest.

Known as the Acadian region – for its French Acadian culture – the area around Lafayette is surrounded by oil refineries and petrochemical plants. Indeed, the oil and gas industries employ thousands in the wetlands of southern Louisiana.

Republican voters in the Cajun parishes of southwest Louisiana are largely Catholic, and – again – if this were another state, the Romney campaign might be hopeful in this region.

However, politically speaking, Catholics in Louisiana are more like evangelical Christians than Catholic voters in other states. Louisiana Catholics are culturally conservative, and their religion is an integral part of their identity, Mr. Brox said, which means they are likely to lean toward Mr. Santorum.

“Catholics are actually going to be both socially and politically closer to evangelical Protestants than a Catholic in Massachusetts or a Catholic in California,” Mr. Brox said.

In Baton Rouge and New Orleans, the traditional suburban Republicanism of states like Illinois – moderate on social issues, pro-business and anti-tax – does appear. In Jefferson Parish and St. Tammany Parish, highly educated, affluent Republicans voted overwhelming for John McCain in 2008. It was his best region in the state. Mr. Romney will likely win votes there as well as in Orleans Parish (although it is majority Democratic) and St. Bernard Parish.

The Southeast will likely be Mr. Romney’s most promising region, just as it was for Mr. McCain in 2008. But Louisiana Republicans are overwhelmingly conservative on social issues. The state, along with Utah, has the most restrictive abortion laws in the nation, and Mr. Santorum is the clear favorite Saturday. 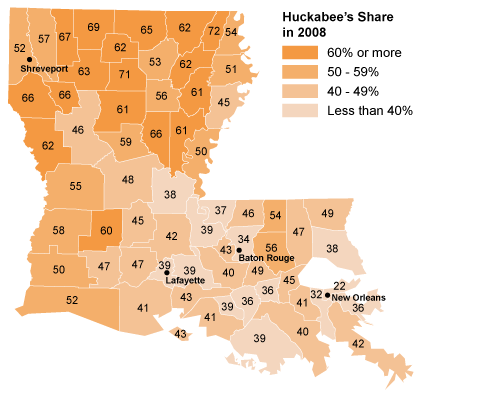 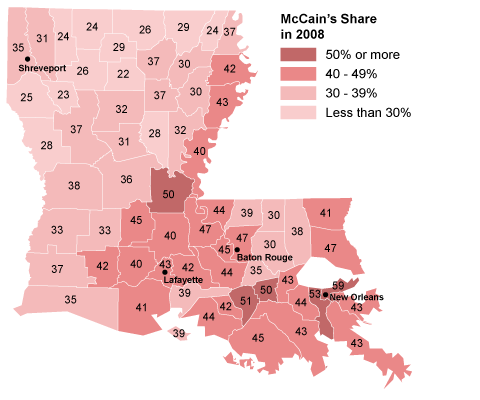 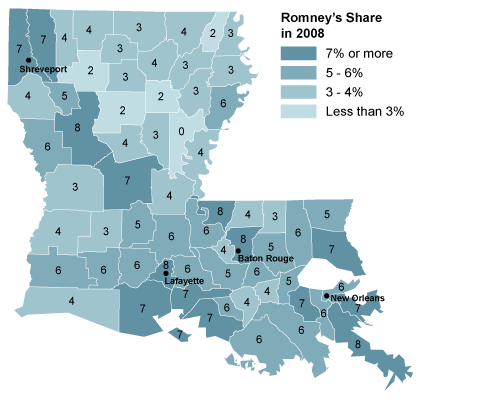