On the Republican nominating calendar, Kansas is among the most favorable stops for Rick Santorum, the former Pennsylvania senator. 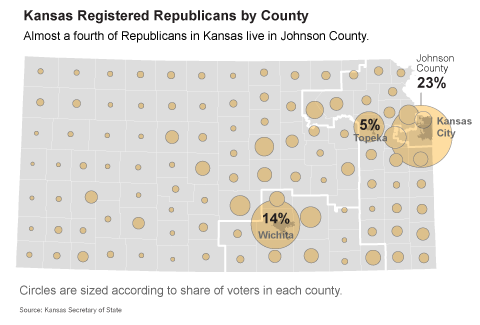 Although the state’s registered Republicans are concentrated in the suburbs around Kansas City and Wichita, rural counties hold a larger share of the electorate than in states like Arizona, where one county, Maricopa, overwhelms the rural vote.

In Kansas, evangelical Christians represent nearly a third of the population, and will likely make up an even larger share of Republican caucusgoers. Moreover, Kansas has a long tradition of activism on socially conservative issues. “The Kansas Republican Party, its whole history, has had a very strong streak of moral issues, whether it’s prohibition or abolition or pro-life issues,” said Clay Barker, the executive director of the Kansas Republican Party. “Things like that tend to be very important to a lot of voters.”

Mr. Santorum has received broad support from evangelical Christians and other social conservatives. In Ohio, for instance, Republican primary voters who described their social philosophy as very conservative favored Mr. Santorum over Mitt Romney, the former Massachusetts governor, by better than two to one, according to exit polls. But there were too few social conservatives in Ohio to swing the state to Mr. Santorum. That is unlikely to be a problem in Kansas.

The Romney and Gingrich campaigns appear to have all but surrendered the state. “Gingrich and Romney have pretty much given up,“ said Mr. Barker, with whom FiveThirtyEight spoke to get the lay of the land in Kansas.

Newt Gingrich was originally scheduled to campaign in Kansas but canceled the trip. Mr. Romney never planned a stop in the state. Only Representative Ron Paul of Texas and Mr. Santorum have held events in Kansas, and both campaigns are organizing supporters.

In 2008, Mike Huckabee, the former Arkansas governor, who — like Mr. Santorum — had strong appeal among social conservatives, won the Kansas caucuses easily despite Senator John McCain of Arizona having for all intents and purposes already wrapped up the nomination. 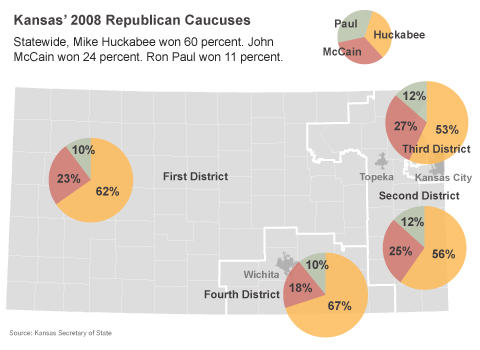 Kansas awards three delegates to the winner of each of the state’s four Congressional districts. Mr. Romney will likely be most competitive in Kansas’ Third Congressional District, which is dominated by Wyandotte County (Kansas City) and Johnson County (Kansas City suburbs). Johnson County Republicans are more affluent and moderate on social issues than those elsewhere in the state (although they are still quite conservative).

In 2008, Mr. Huckabee received “only” 53 percent in the Third District. Agriculture and industry hold sway in most of Kansas, but the suburbs of Kansas City are one of the few places in the state where service jobs are a principal presence.

The western half of Kansas comprises small towns, very conservative and very likely to favor Mr. Santorum. He should win the First Congressional District, which covers essentially all of western Kansas. It is predominantly rural, with farms in the north and more industrial agriculture, like slaughterhouses, in the south.

The lightly populated counties in West Kansas are among the most socially conservative in the country. Their focus, both politically and culturally, on hot-button social issues, particularly abortion, was chronicled in the best-selling book, “What’s the Matter With Kansas?” by Thomas Frank.

Mr. Paul’s most promising district is the Second, which covers all of eastern Kansas except the area around Kansas City. Although Mr. Santorum should be considered the favorite in the Second District, it includes the state’s two largest universities, the University of Kansas and Kansas State University, and young voters have shown more of an affinity for Mr. Paul than other age groups.

Mr. Romney does have some advantages. He has received endorsements from the elder statesman of Kansas politics, former Senator Bob Dole, as well as Kansas’ current secretary of state, Kris Kobach, a conservative who has gained national prominence for his role in writing tough immigration laws.

Polling in Mississippi and Alabama, two states that also present demographic challenges to Mr. Romney, show a close race. Perhaps rank-and-file Republicans are coalescing around Mr. Romney, and he will exceed expectations in Kansas.

Still, Kansas is about as unfavorable a state as Mr. Romney will encounter, and because the state is holding caucuses rather than a primary, a lower turnout will likely exacerbate Mr. Romney’s disadvantage.