As FiveThirtyEight has discussed, the political and cultural divide between the Chicago area and the rest of Illinois is stark.

In the state’s Republican primary on Tuesday, Mitt Romney should excel in Cook County, where Chicago is located, and in the five “collar counties” that surround it. Rick Santorum will find more support in the rest of the state, particularly in the south. The turnout will determine whether Mr. Santorum has a chance — or how big Mr. Romney’s margin will be, since the polls have tipped in his direction.

To get a more detailed sense of Illinois’s political landscape, FiveThirtyEight spoke to Paul Green, the director of the Institute for Politics at Roosevelt University and a political analyst for WGN Radio. 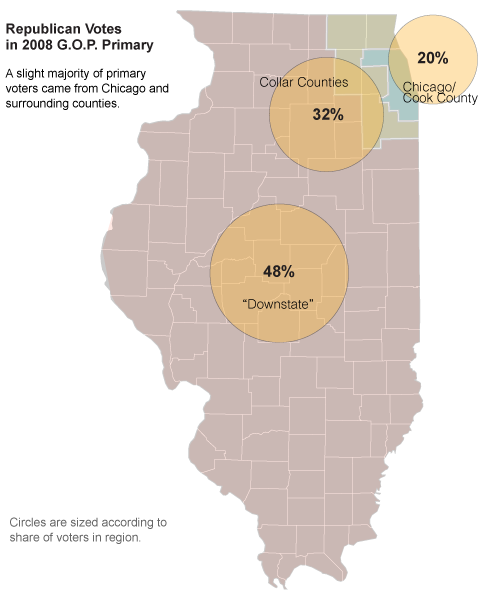 Anchored by Chicago, the nation’s third largest metropolitan area at 9.7 million inhabitants, Cook County is overwhelmingly Democratic. Still, because of the sheer size of its population, Cook County contributed a fifth of the vote in Illinois’s 2008 Republican primary, with most of those voters located outside the Chicago city limits.

Republican voters in Cook County are moderate on social issues. They are business-oriented and more affluent than the state as a whole. Republican votes will emanate from communities like Evanston, where many residents work in Chicago’s financial markets (Evanston is also the home of Northwestern University), and Schaumburg, which has the state’s second largest tax base after Chicago. Schaumburg is home to a number of corporations, including Motorola and Sears, both of which have their headquarters there. This is the establishment of the Republican establishment. In the 2008 primary, Senator John McCain won Cook County with 52 percent of the vote.

It would be a shock if Mr. Romney did not win a large majority of Cook County’s votes, although Mr. Santorum might have a few stronger areas in the multiethnic and more culturally conservative suburbs to the west and south of Chicago, which make up the Third Congressional District. The Third District is represented by a Democrat, Dan Lipinski, but Mr. Lipinski is socially conservative; he opposes same-sex marriage and is against abortion except when the mother’s life is at risk.

The question in Cook County is not so much whether Mr. Romney will win but the margin he can secure there. If his margin climbs out of the low teens, Mr. Romney will be in good shape in Illinois.

The “collar counties” — DuPage, Kane, Lake, McHenry and Will — resemble the suburban parts of Cook County and should also be strong areas for Mr. Romney. Republican voters in these densely packed suburban counties are generally well educated and well off. For the most part, this is the Chamber of Commerce wing of the party, focused on the economy, taxes and business regulations. In 2008, about a third of the primary electorate came from the collar counties.

Historically, the collar counties were more solidly Republican, but in recent elections the region has leaned more Democratic. The shift is typified in the Sixth Congressional District, which consists mostly of DuPage County. DuPage residents began to punch the Democratic ticket more often in the 1990s, as local voters — concerned about fiscal issues — balked at the national Republican Party’s tilt into cultural conservatism.

In addition to typical suburban bedroom communities, where residents commute to Chicago, DuPage County has also been creating local jobs at a fast pace, at least before the recession hit. The corporate headquarters of Ace Hardware and McDonald’s are located in Oak Brook, as is McDonald’s Hamburger University. DuPage County will be among the most important counties to watch on Tuesday. Mr. Romney is favored there, but if it is close, Mr. Santorum may have a chance at an upset victory in Illinois.

Another collar county where Mr. Romney is likely to find support is Lake County, which includes the North Shore, a string of affluent suburbs along Lake Michigan. The North Shore has long been home to Chicago’s elite. It is an area where everyone has a friend who owns a Nascar team.

As you travel west out of Chicago, through the collar counties, you enter Kendall County, the industrial Fox River Valley and “downstate” Illinois.

This region is something of a transition between Chicago and its suburbs and the rest of the state. As urban flight brought families streaming out of the Chicago area, the population of Kendall County surged, and an exurban area became more of a suburban/exurban mix. In the collar counties, residents commute to Chicago. In Kendall County, residents commute to the collar counties.

Traveling farther west you arrive in more solidly Republican territory. Ronald Reagan grew up in Dixon, Ill., in Lee County. But the northwestern region of Illinois isn’t as Republican as it once was. In 2004, President George W. Bush won a smaller share of the vote than his father did in 1988 in almost all of Illinois’s northern counties.

Southwest of Chicago, heavy manufacturing, farming and industrial agriculture begin to take over. In Peoria, in Peoria County, Caterpillar is the largest employer.

Farther south is Springfield, the state capital. Although Springfield itself is fairly moderate — as is the Champaign-Urbana area up Interstate 72, where the University of Illinois is located — these communities are not very typical of the region.

To the southeast of Springfield lies a vast stretch of prairie land with large industrial farms and soybeans and corn. This is fertile ground for Mr. Santorum. In southern Illinois, racial diversity dissipates and conservatism has more of a cultural tinge than in the north. Counties in the south, like Effingham County, have large numbers of evangelical Christian voters, a group that has been among the most resistant to Mr. Romney.

This was Mike Huckabee’s strongest area in 2008. Mr. Santorum will need to run up huge margins in the south, particularly in the more populous counties, like St. Clair County and Madison County, to compete statewide.

Finally, at the southern tip of the state is Cairo. It is pronounced “CARE-oh”, unlike the African city, but to a typical Chicagoan it might as well be in Egypt. Cairo is about a six-hour drive from Chicago, but it’s only three hours from the Mississippi border.

County-by-county results maps for the 2008 Republican primary follow below. 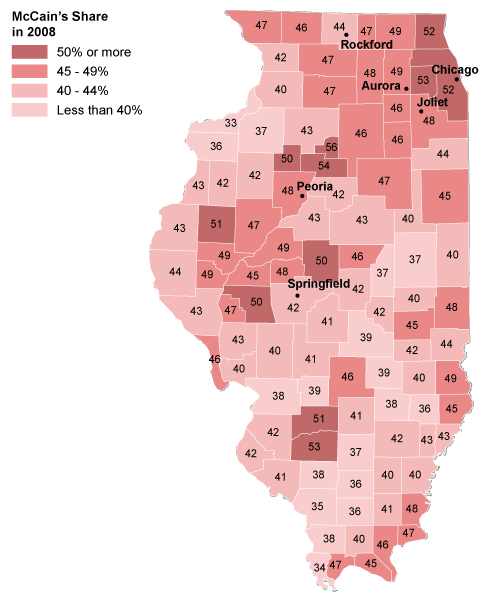 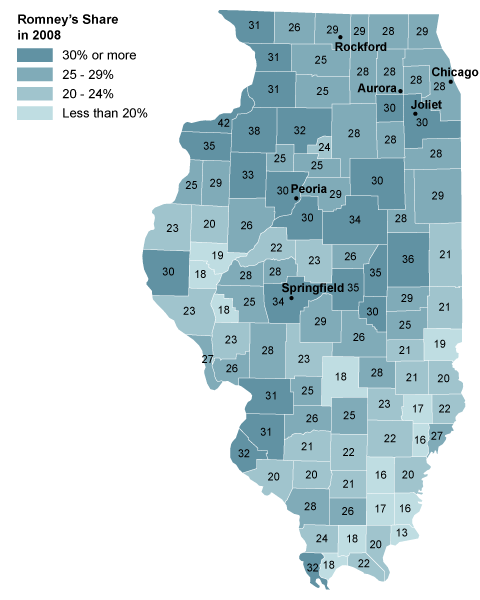 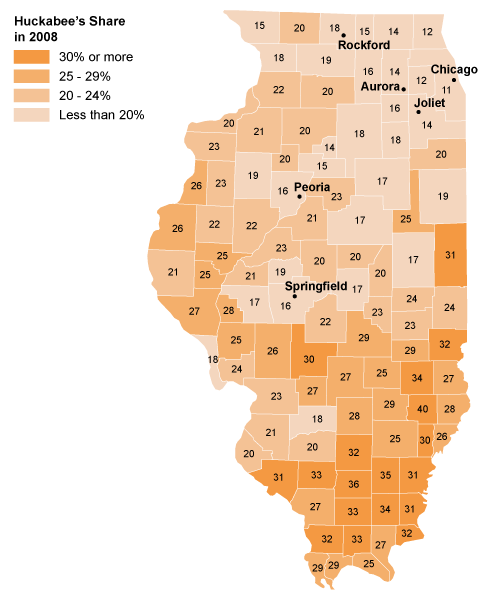