Arizona’s Republican electorate does not have the sharp geographical distinctions one might observe in states like Michigan and Florida. Most of the population is packed around Phoenix and relatively homogenous.

In addition, although we might have looked toward the state’s 2008 primary results for illumination, a “favorite son,” Senator John McCain, was the front-runner that year, dulling geographic differences in voting patterns.

Nonetheless, we wanted to provide some sort of road map to follow as results are reported in Tuesday’s primary. So FiveThirtyEight tapped the expertise of Chip Scutari,  a founder of Scutari & Cieslak Public Relations and a former political reporter for The Arizona Republic; Bruce Merrill, who conducts Arizona State University’s monthly Cronkite-Eight Poll; Robert Robb, a columnist for The Arizona Republic; and Shane Wikfors, director of communications for the Arizona Republican Party. 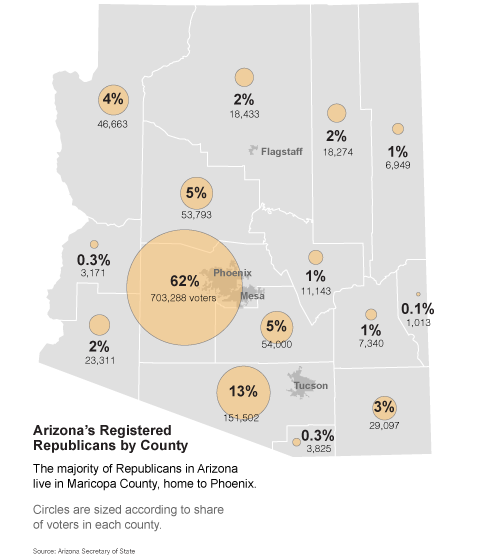 The vote in Maricopa County, (

View on Map) anchored by Phoenix and a number of midsize cities surrounding it, will make up most of Tuesday’s turnout; 62 percent of the state’s enrolled Republicans live in Maricopa. Phoenix votes Democratic, but the surrounding area — and the county over all — has consistently leaned Republican. The technology boom in the Sun Belt has flooded the Phoenix area with white-collar workers, and areas like the East Valley, including Mesa and Gilbert, are dominated by establishment conservatives, who tend to be pro-business and more moderate on social issues.

The East Valley also has a significant number of members of the Church of Jesus Christ of Latter-day Saints, a group that so far has voted overwhelmingly for Mitt Romney, a fellow Mormon. In fact, Mesa was settled by Mormons in the late 1800s.

Statewide, Mormons make up 4 percent of the population. But their turnout has traditionally been strong in Republican primaries; in the 2008 G.O.P. primary in Arizona, they made up 11 percent of the electorate.

The Tea Party vote is likely to be strong in North Phoenix and the West Valley. G.O.P. voters in those areas are likely to be concerned about the federal deficit and President Obama’s health care reform law. North Phoenix is dotted with evangelical churches. And the West Valley has a heavy concentration of blue-collar workers, as well as large retirement communities like Sun City and Sun City West (Arizona residents 65 and older made up 31 percent of the electorate in 2008, according to exit polls).

The housing bust hit all of Arizona hard, but areas like the West Valley and South Phoenix were particularly ravaged.

Over all, Maricopa County is likely to favor Mr. Romney, which is why he is expected to win the state handily.

This area is the most Democratic in the state — it voted narrowly for Barack Obama in 2008 — mainly due to the large number of  Hispanic voters. Hispanics make up slightly more than a third of the population both in Pima County as a whole and in its largest city, Tucson.

Pima still contains plenty of Republicans — about 13 percent of the state’s enrolled total — but they can be somewhat more moderate than those elsewhere in the state. The state’s Eighth Congressional District seat, which includes the eastern part of Pima, was held from 1985 to 2007 by Jim Kolbe, an openly gay Republican. And Mr. McCain, who was perceived to be to the left of the other top-tier Republican candidates in 2008, won Pima in the primary with 47 percent of the vote.

Pima’s more moderate ethos would seem to suit Mr. Romney, but Ron Paul might win votes in Tucson, where the University of Arizona is located.

The rest of Arizona, vast but sparsely populated, is reliably Republican outside of a few northeastern counties that contain a number of Indian reservations. But that wasn’t always the case. Traditionally, Arizona outside of Phoenix and Tucson was dominated by “Goldwater Democrats” or “Pinto Democrats,” who were fiscally conservative and socially libertarian.

This is Wild West territory, so don’t be surprised if Mr. Paul’s individualist pitch plays well here, particularly in the north of the state. Mohave County in the northwest, covering part of the Grand Canyon, was the only county in 2010 to vote against Proposition 100, a ballot amendment that temporarily raised the state’s sales tax by one percentage point. There’s a similar mix of conservatism and libertarianism in neighboring Yavapai County, a region where protecting the Second Amendment has been an important issue.

Coconino County includes a Mormon enclave along the Utah border called the “Arizona Strip” and, to the south, Flagstaff, a college town that may boost Mr. Paul’s numbers (it was one of his better counties in 2008). Graham County, anchored by Safford, also has a significant Mormon population. It was Mr. Romney’s best county in 2008; he won 66 percent of the vote there.

The maps below show Arizona’s county-level results from the state’s 2008 presidential primary. Keep in mind, however, that Mr. McCain’s presence in the race probably altered some votes. 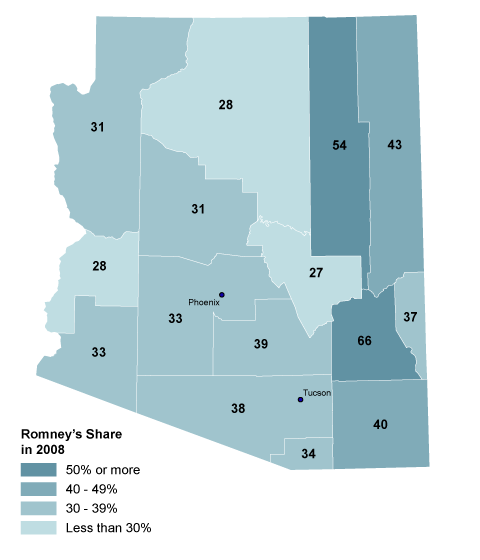 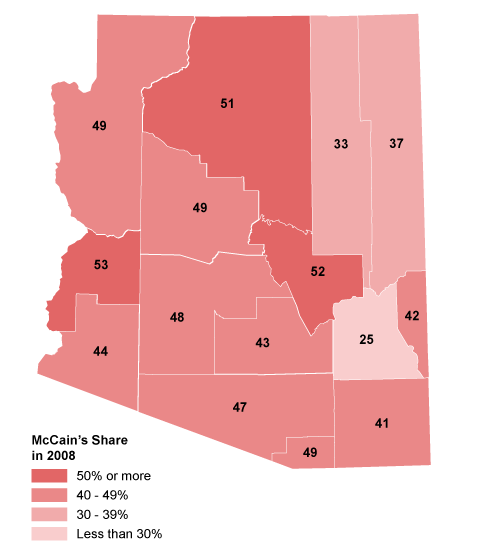 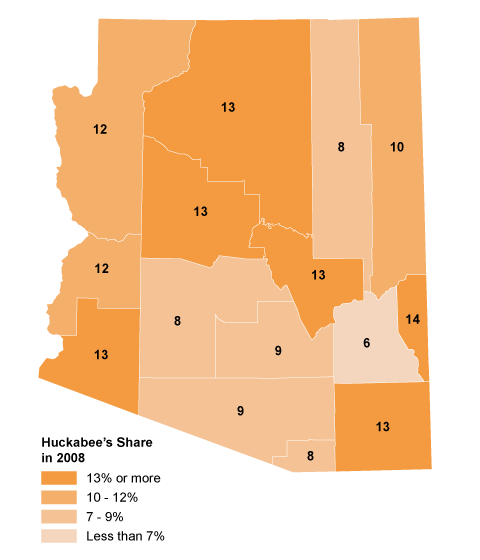 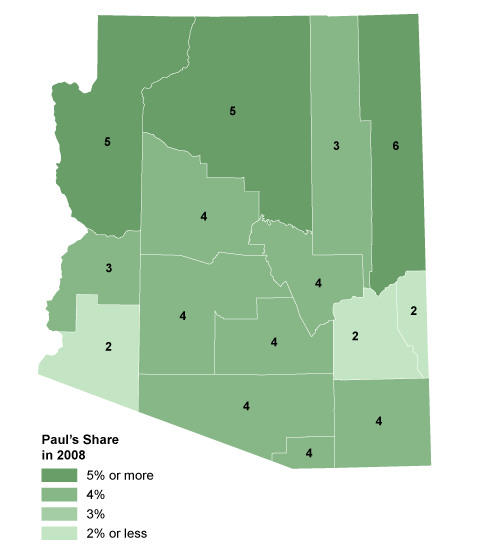