Our state-by-state profile of the Republican electorate — a mixture of analysis from local experts, demographic data and past voting results — lands today in the Deep South, first in Alabama, then in Mississippi.

Gathering a sense of the political geography of these states seems particularly useful because past polling in both Alabama and Mississippi has not been terribly reliable. In any case, the polling we do have shows a close three-way race in both states among Newt Gingrich, Rick Santorum and Mitt Romney.

To get a better sense of Alabama, we consulted a few local experts: Steve Flowers, a longtime political columnist in the state, as well as two political science professors from the University of Alabama, Richard Fording and William H. Stewart.

Statewide, Republican voters in Alabama are overwhelmingly older and evangelical Christian. According to exit polls, 77 percent of Republican primary voters in 2008 described themselves as born-again or evangelical, and 56 percent were 50 or older.

The Republican electorate is concentrated in suburban communities in the north and along the Gulf of Mexico. 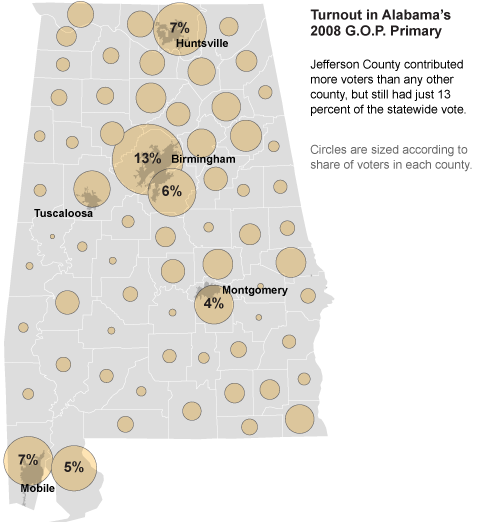 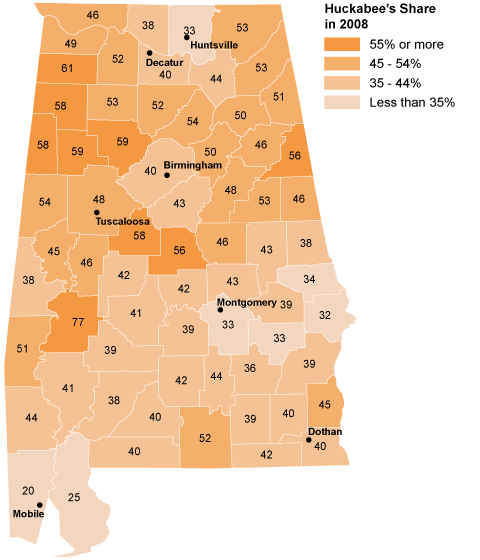 Most of Mr. Huckabee’s support came from the counties that make up the state’s Fourth Congressional District. The Fourth District is generally rural and has a heavily evangelical population based mostly in small towns. The district also has a higher share of blue-collar workers than any of Alabama’s six other Congressional Districts.

In Alabama’s primary on Tuesday, Mr. Santorum — and perhaps Mr. Gingrich — will most likely do well where Mr. Huckabee did well in 2008. 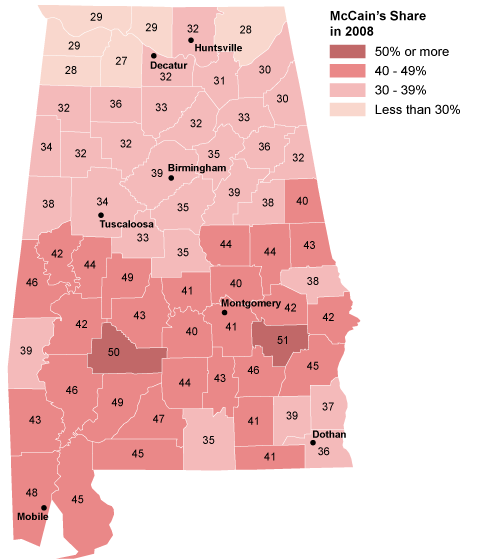 Mr. McCain did much better in southern Alabama than in the north. He won near majorities in the counties that make up the First Congressional District.

Southern Alabama’s population is anchored in the Southwest, in Mobile County, and just to the east, Baldwin County. In Mobile County, the City of Mobile’s economy revolves around its port, which helps serve Alabama’s burgeoning automobile industry. Baldwin County is mostly condominium communities along the Gulf Shore. The Republican vote in both counties comes from suburban areas.

Republican voters in Southern Alabama tend to be hawkish on military matters, which helps explain Mr. McCain’s strength in the area. There are a number of military installations in the region, including Fort Rucker northwest of Dothan and Maxwell Air Force Base in Montgomery.

Southern Alabama also includes the Black Belt. Originally named for the region’s dark topsoil, the Black Belt consists of a string of counties with large African-American communities (you can see it clearly in the state’s 2008 general election results). Few black Alabamans vote in Republican primaries, but white voters in this region tend to be more moderate on social issues. 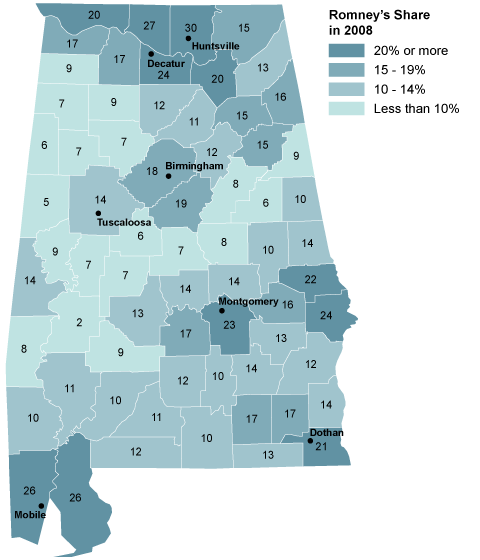 A plurality of the Republican electorate in 2008, 47 percent, came from the Alabama suburbs, and Mr. Romney — as he has this election cycle — did well in and around cities in 2008. His strongest base of support then was along Alabama’s northern tier, among voters in the state’s Fifth Congressional District.

The Fifth District is dotted by defense and NASA-related installations. Workers in the Fifth District, particularly in Madison County, have helped develop everything from the United States’ first ballistic missiles to the Space Shuttle and the Hubble Space Telescope. 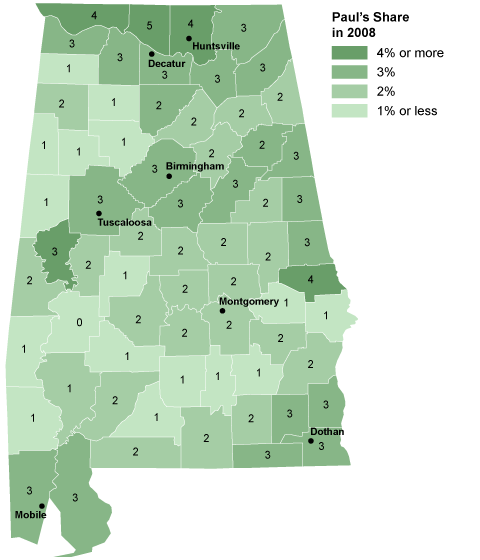 Pinpointing geographic areas of strength for Mr. Paul is more difficult. He won just 2.7 percent statewide in 2008, and his support was dispersed relatively evenly throughout the state.

A tight three-way race is hard to keep track of, but watch Mr. Romney’s vote share in the better-educated, affluent suburban counties. If he is only squeaking out wins in Madison, Jefferson, Shelby, Mobile, Baldwin and — to a lesser extent — Montgomery, his chances of winning the state drop significantly.

For both Mr. Santorum and Mr. Gingrich, meanwhile, the others’ vote share in Alabama’s rural, evangelical counties will largely determine whether either can surpass Mr. Romney. If either Mr. Gingrich or Mr. Santorum is consistently outperforming the other in the northern counties where Mr. Huckabee did well, then that candidate has a substantial shot at a statewide win.