Poetry about American football has been largely underwhelming. The type of verse you’re likely to find if you search “football poems” is the sort that rhymes “feet” with “defeat” and “run” with “#1.” But that should change on Sunday before the start of this year’s Super Bowl, when National Youth Poet Laureate Amanda Gorman will recite an original poem.

[Our Guide To Super Bowl LV]

Fresh off her star turning reading at the inauguration of President Biden, Gorman will honor three community leaders in verse and attempt to bring some sophistication to what in normal years is an unapologetic excuse for a national party. Gorman will be the first poet to perform at the Super Bowl, marking yet another first for football in a pandemic season knotted with them. So it’s probably unsurprising that — when faced with something novel and Super Bowl-adjacent — people found ways to wager on it.

We’ll bet on anything — even poetry — just to feel something on Super Bowl Sunday. So in what has become a yearly prop bet ritual, we’ll dissect each of three bets related to Gorman’s poem1 to see if we can’t find a winner.

Which of three words will Gorman say first?

Putting aside that there are more betting options for the color of the liquid that will be poured on the winning head coach than there are for a word said by a poet laureate reading an original poem, these choices reek of having been picked randomly from a bookie’s hat. So, assuming there is no careful analysis behind these picks,2 perhaps there is an edge for a sharp bettor here.3

It’s understandable that “hero” is the favorite, since Gorman already publicly referred to the three people she’ll be profiling as heroes. But she’s also a sophisticated writer, shaping her verse with verve to fit a moment.4 Starting off with some very conventional talk of heroes — while possible — seems a bit too on the nose. A similar line of reasoning makes “super” a pretty heavy underdog as well. That leaves us with “pandemic,” an inelegant word that’s probably hard to rhyme. Still, there is some evidence for it as a solid choice if we roll up our sleeves and do some sentiment analysis.

Gorman is young — just 22 — and there are no published anthologies of her work that are currently available.5 She has performed national addresses publicly just twice, so that means we have a total of two (2) poems for our analysis.6 When combined, the sentiment expressed in the poems follows a three-act structure: a setup in the first act that then cascades into a “dark night of the soul” in the second act before ultimately soaring to a finish with maximum positive sentiment.7 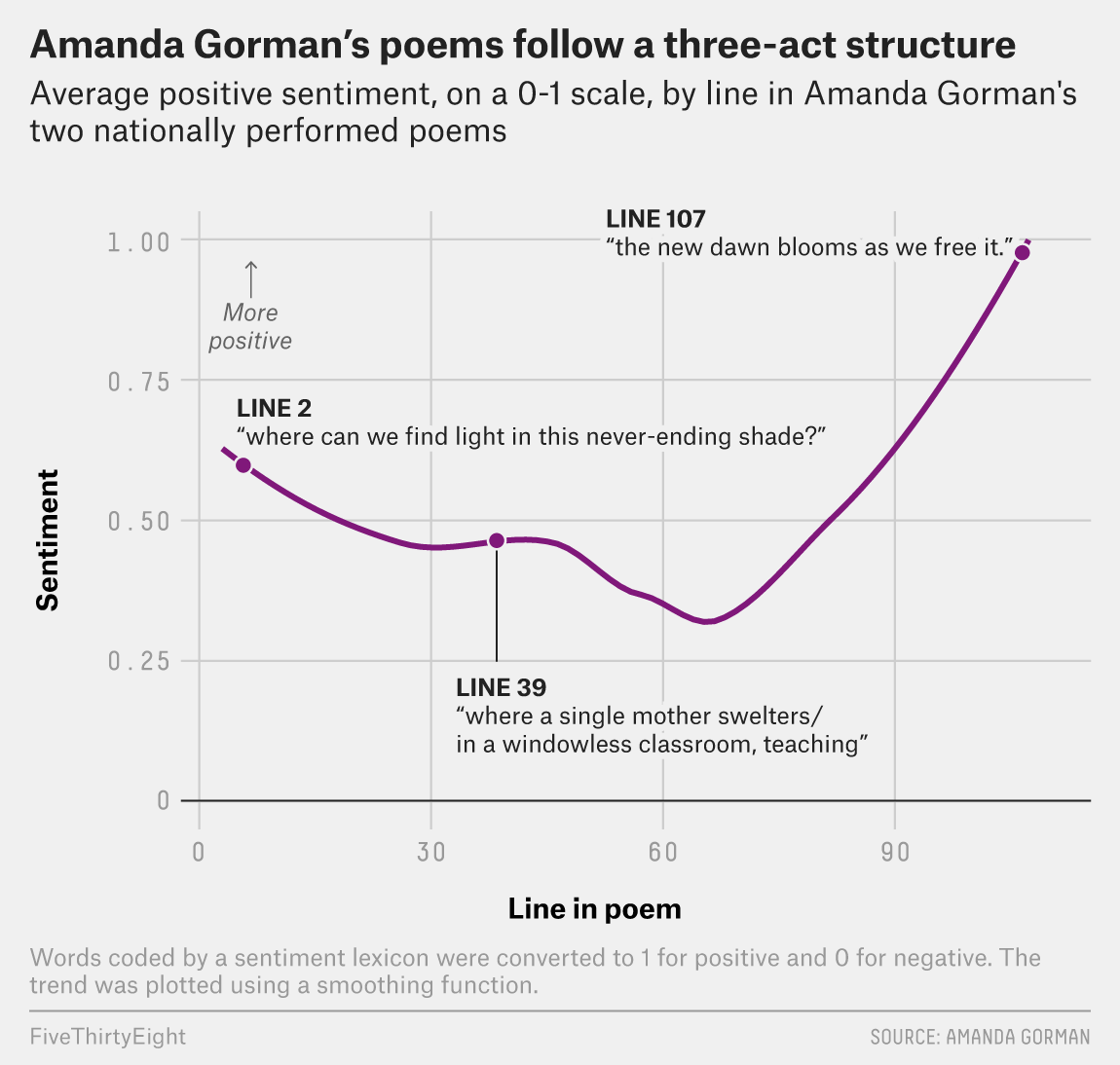 It seems like a decent bet that a massive national stage like the Super Bowl would lend itself to a similar, well-established pattern for good storytelling. That’s potentially useful to know, since “hero” and “super” are both words with positive sentiment attached to them, and “pandemic” is negative.8 Based on the plot of her earlier poems, positive words are more likely later in this one, so perhaps betting against those words is the sharp play. Furthermore, perhaps Gorman will find a way to connect “pandemic’s” prefix of “pan” — which is Greek for “all” — to the theme of the poem, which is also the NFL’s brand campaign this season: “It Takes All of Us.”9 “Pandemic” it is.

Who will Gorman mention first?

One way to get an edge on sportsbooks is to find correlated wagers to bet. When bets are structured this way, if you win one, the likelihood of winning the next wager increases. If we believe that “pandemic” will be the first word spoken, it may help us predict which of the three heroes will be highlighted first.

Suzie Dorner, a front-line COVID-19 ICU nurse, is a logical choice. Dorner is also the only woman of the group, and in a year ravaged by the pandemic and in which the first female vice president was sworn into office, there is a symmetry to putting her at the front of the line. There are large uncertainties at play — “pandemic” could be uttered first while Dorner is mentioned later, perhaps in the “dark night of the soul” portion of the poem. But at +130 and with the correlation play in our favor, we’ll take the risk.

Finally, there is a bet on which team name Gorman will mention first. “Chiefs” seems a poor favorite to be uttered by a woman who’s in the business of choosing her words carefully and who is deeply concerned with issues of racism and marginalization. Besides, we have another correlation play staring us in the face, turning this entire fevered operation into a three-way correlated parlay.

If we’re right and “pandemic” is uttered first, and because of that thematic choice Tampa’s own Dorner is highlighted first among the heroes, then — as surely as Pete Carroll wants to run the ball on first down — the Buccaneers will be the first team mentioned by Gorman.

Is the case here thin? Sure. But prop bets wouldn’t be half as fun if they weren’t slightly ridiculous. We’ve made hay on the length of the national anthem and lost on the first song of the halftime show. This year, we’ll be hanging on the every word of a poet laureate, for the first time in football history.