As embattled Governor David Patterson seeks to push a gay marriage bill through the New York State Senate, two new polls suggest a plurality and perhaps outright majority of New York State residents support full marriage rights for gay and lesbian couples. One poll, from Siena College, shows an outright majority of 53 percent of New York registered voters in favor of same sex marriage, with 39 percent opposed. The other poll, of 500 adults from SurveyUSA, has same-sex marriage favored by a 49-44 plurality.

A comparison of the demographic crosstabs from these polls, which are interesting if somewhat predictable, is produced below. 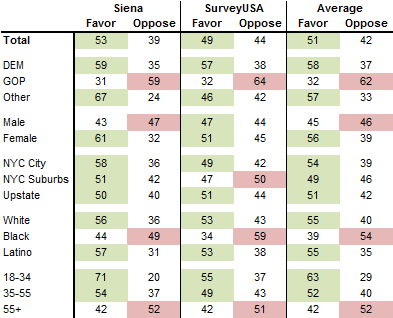 The interesting finding here — although small sample size caveats apply — is that same-sex marriage is narrowly favored even by upstate New Yorkers. That could place pressure upon upstate Democrats David Valesky of Oneida, Darrel Aubertine of Cape Vincent, and Bill Stachowski of Buffalo, who have voiced opposition to full-fledged marriage rights, to change their positions. Bronx-based Democrat Ruben Diaz Sr., however, who is a Pentecostal minister, is considered somewhat intractable on the issue, and so Patterson will need to find support from at least a couple of Republicans in addition to trying to lobby the upstate Democrats. Democrats have a very narrow 32-30 advantage in the Senate; New York’s lower chamber, the State Assembly, is expected to pass the bill easily.