It’s April, and the Stanley Cup lies in wait. The NHL postseason starts Wednesday, and with it comes the NHL’s most intense play. It’s not just the stakes that rise this time of year. It’s the on-ice aggression, too.

Using data from every regular and postseason NHL game from 2005-06 through today, I identified every hit that was registered on the official play-by-play record. When comparing the total number of non-overtime hits in the more than 11,000 regular-season games and more than 750 postseason games, I found that there’s a massive and statistically significant increase in hits when the playoffs start.

Regular-season games average about 42.0 total hits for both teams prior to overtime. In the playoffs, that number jumps 36 percent to 57.2 pre-overtime hits per game.

Out of the 144 playoff teams since the 2005-06 NHL season, 142 increased their average number of hits per game after the playoffs started. For 101 of the teams, this difference is unlikely to have occurred because of randomness.1 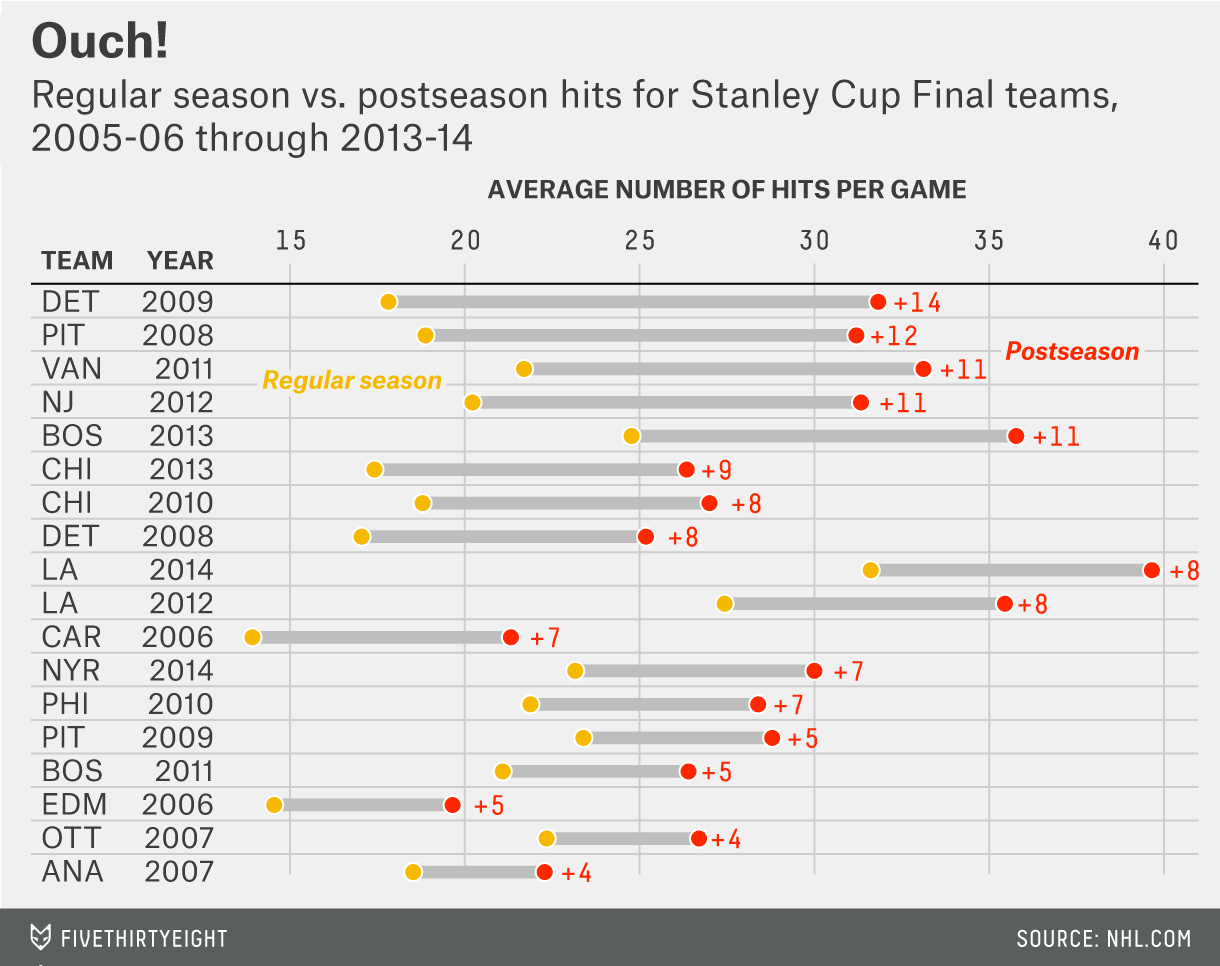 The chart above shows these increases for the 18 teams that have qualified for the Stanley Cup Final over the past nine seasons. The 2009 Detroit Red Wings had the biggest change in intensity between the regular season and the playoffs — they averaged 14.0 more hits per game in the postseason. Last year’s finals featured the Los Angeles Kings, who increased their hit number by 8.0 per game, and the New York Rangers, whose hit number rose by 6.8.

The players, of course, have rising hit tallies themselves. The active player with the biggest increase in hits: Pittsburgh Penguins winger Blake Comeau. While Comeau averages just 2.0 hits per game in the regular season, his postseason average is 5.5. Even though he has played only six postseason games, this difference is statistically significant.

Every game in the the first round of the playoffs is likely to feature a lot of heavy hitting. If you’re looking for the series that should have the biggest intensity jump, look no further than the Montreal Canadiens versus the Ottawa Senators and Comeau’s Penguins versus the Rangers. Both of these series feature six players whose playoff increase in hits is in the top 50 in the NHL.

Stephen Pettigrew is a Ph.D. candidate in the Harvard Department of Government. In addition to studying American politics, Stephen writes about sports analytics on his blog, Rink Stats. @rink_stats