While reports are varied regarding the implications of the Afghan election recount, and the chance of a coalition government in the meantime seems slim, the coming week will likely include some hard-spun rhetoric and policy debate, particularly from the international players in Afghanistan.

The upcoming German Federal elections (27 September) are the most pressing political deadline for the major NATO partners, which have been thrown into turmoil over the controversial air strike on 4 September. At the same time, the top US commander in Afghanistan, Stanley McChrystal, has given a frank assessment of the US strategy in the country, assigning failing marks to both the NATO forces and the Afghan government. He contends that “without more forces and the rapid implementation of a genuine counterinsurgency strategy, defeat is likely,” says the Washington Post.

British fatigue with the Afghanistan conflict has been long-standing, enough to prompt US Defense Secretary Robert Gates and other senior US military officials to question the UK’s “political will” on the subject last December.

The summer’s infamous “helicopter row” further politicized the British engagement, with the Tory opposition calling Gordon Brown to the mat over alleged reductions to helicopter production budgets in the early 2000s. Representative of broader claims that British troops are poorly equipped and vulnerable as a result, the Conservatives used the issue to challenge Labour’s overall progress in conduct of the war. With the foreign policy legacy of the Blair and Brown “New Labour” governments strongly linked to success in Afghanistan, and David Cameron’s insistence that the Conservatives would also pursue an aggressive Afghistan policy (albeit a “smarter” strategy), however, it is unlikely that the UK would entertain a serious reduction or pull-out in the coming several years.

The same cannot be said for several other NATO allies of the international forces. Following a car bomb attack that killed six Italian soldiers, Prime Minister Silvio Berlusconi responded that Italy would be pulling its troops out as quickly as possible, though not immediately. “We are all convinced that the best for everyone is to get out soon,” he emphasized. The Sarkozy administration in France has joined with the British and German governments in calling for an international conference in the coming months that sets solid timetables for withdrawal. Canadian threats for a pull-out have occurred several times over the last eight years, mostly in protest of perceived poor support from other allies. Canadian officials vowed last year to remove all of its troops by 2011, withstanding pressure from US and other NATO allies.

As the pieces begin to sort out, this week could see a final announcement regarding the international strategy conference on Afghanistan, which the US and UN have reportedly agreed to holding along with France, Germany and the UK. At the same time, a concrete timeline for the final results of the Presidential election is forthcoming. Given the instability in the country and the month that has already passed since the 20 August balloting, additional delays in the formation of a new government could be quite damaging to efforts to build support for the national authorities.

In summary, instability marks not just the Afghan security and political scene, but international support as well. Many national governments and their publics, including major players like the US, Germany and the UK, are questioning the national interest of continued expenditure and loss of life in the country, particularly as opposition pressure mounts. While military and financial commitments are likely to hold for several years, it is clearer than ever than national interests and security, rather than international commitments to democracy or human rights, lead the calculus.

Moving forward, as the news trickles over the coming months, a few major stakeholders will play key roles. We will continue to follow them here at FiveThirtyEight.

1. Electoral Complaints Commission: Established in 2004 following accusations and evidence of severe fraud in the previous Presidential election, the ECC is by a powerful institution. As discussed last week, the ECC can delay or prevent the finalization of the election results, as well as issuing fines and sanctions. The decisions of this institution, which ordered the current recount after fielding thousands of electoral complaints, will largely determine the outcome of this election. The UN-supported ECC is made up of three international and two Afghan commissioners.

2. Independent Electoral Commission: The IEC is led by seven Afghan commissioners and is meant to operate as a neutral, technical overseer of elections in the country. However, the IEC’s apparent inability to prevent electoral graft and intimidation has called the official vote totals into question. At the end of the day, the IEC is subject to the type of corruption and political manipulation that is endemic in elections held in poor, insecure locations around the world. Though this institution has received a great deal of criticism, the expectations for the IEC has been raised to unrealistic and unfair levels, given the insecurity and corruption.

3. UN Assistance Mission in Afghanistan (UNAMA): Led by Kai Eide, a senior diplomat from Norway, UNAMA has been in-country since its establishment by the UN Security Council in 2002. The mission’s mandate is focused in two parts, first political stability, good governance and “constitutional democracy” and second, recovery and reconstruction. A great deal of the international community’s aid to Afghanistan has been implemented through UN agencies, which are coordinated, but not actually implemented, by UNAMA.

4. International Security Assistance Force (ISAF): The NATO-led international force, which currently has an official strength of 64,500, also includes troops from 12 non-NATO countries, such as Jordan, Singapore, and Bosnia –though they are largely symbolic forces of between 2 and 25 soldiers. 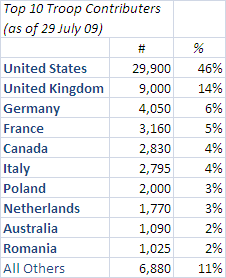 5. United States Forces Afghanistan (USFOR-A): US Forces in Afghanistan, led by General McChrystal, are focused in the volatile southern and eastern portions of the country, where Taliban elements are located. The current strategy includes a mix of counter-insurgency, training and reconstruction activities.

6. Afghanistan National Army: With an estimated current strength of around 100,000, the effective operation of the ANA, including policing duties, is a key goal for the international forces in Afghanistan. The US government has funded and provided most recruitment and equipment for the forces, while training as has been done by all allies. The ANA has had combat success, such as in “Operation Achilles” against Taliban forces, but is widely considered to be ineffective.
—
Renard Sexton is FiveThirtyEight’s international columnist and is based in Geneva, Switzerland. He can be contacted at sexton538@gmail.com