No single geographic locale is more closely associated with the iconography of modern American conservatism than California’s Orange County. In the narrative of conservatism’s rise from the ashes of Lyndon Johnson’s 1964 landslide to its dominance four decades later of the White House, Congress and the federal courts, Orange County holds the near-mythical status of conservative ideal and idyll, a repository of all things noble and good: unapologetic anti-communism, embrace of the military-industrial complex, strong Christian family values, suburbanization, bootstrap entrepreneurialism, and a fierce resistance to big government, new taxes and the welfare state. The county, which boasted about 13,000 people in 1890, grew tenfold by 1940 and then increased another sixfold to surpass 700,000 residents by 1960. 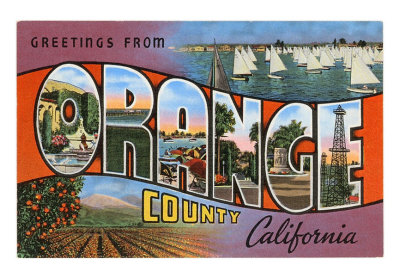 This suburban heartland was not only home to Walt Disney’s visionary new park, to thousands of new California families and new towns and cities; it was also the birthing ground of a powerful grassroots political movement. A revitalized and militant Right–fueled by a politics of antistatism, virulent anticommunism, and strict normative conservatism–burst onto the scene nationally in the early 1960s, and nowhere more forcefully than Orange County. At living room bridge clubs, at backyard barbecues, and at kitchen coffee klatches, the middle-class men and women of Orange County “awakened” to what they perceived as the threats of communism and liberalism … The characteristics of Orange County’s development–its specific form of economic growth, the domination of its politics by an antiliberal and anti-eastern business elite, and the experiences of the people who settled there–created a favorable context for virulent right-wing beliefs.

This was the Orange County that gave root to Goldwater’s turning-point presidential campaign and proceeded to deliver strong Republican majorities for four decades.

No such political treatments have been written about California’s Placer County, a narrow, east-west horizontal strip of land about 80 miles northeast of Sacramento that borders Nevada. But today Placer County is more emblematic–or symptomatic, to be precise–of the state of American conservatism than Orange County.

Familiar to many today as home to the California side of the Lake Tahoe ski-and-summer recreational area, Placer County remains a largely pastoral county. Of the county’s six incorporated cities and towns, Roseville (pop. 109,000) has the largest population and none of the other five are even half its size. But Placer has experienced a population explosion of late. Since 1998 its population has increased by almost half, and a 2007 Census Bureau report ranked Placer as California’s fastest growing county and the fifty-fifth fastest nationally. Much of this boom has been fueled by the relocation inland to Placer and its neighboring mountain counties of native Californians who abandoned coastal areas they deemed too crowded or cosmopolitan for their tastes. The county is a major beneficiary of white flight caused by the arrival in California of Hispanic and Asian immigrants, and the in-migration of white Americans from other parts of the country. Though Placer’s minority population has inched up steadily in recent years, non-Hispanic whites still account for 80 percent of the county population and the minority growth rate is far slower than almost every other county or region in California. Every year this decade net migration has accounted for at least three-quarters of Placer’s population growth, more than triple the statewide average. Placer County has become a magnet for exurban growth and development.

The growth of counties like Placer has transformed California’s historic north-south divide into an east-west one or, more accurately, a new political struggle between the state’s coastal and inland counties. Sadly, racial dynamics are an important engine in this geo-demographic transformation. “As the state’s coastal region has become more urbanized and diverse, new and highly homogeneous white residential developments have appeared in inland counties that until recently were almost exclusively rural,” write Frederick Douzet and Kenneth Miller, authors of The Political Geography of California. Most counties in the Mountain region are 80 to 90 percent white, including seven of California’s thirteen whitest counties. Placer is among the thirteen.

Placer County politics are unabashedly conservative. Though 2008 GOP presidential nominee John McCain carried California’s Fourth Congressional District, which includes Placer, by just 10 points, four years earlier George W. Bush won it by 24 points. In November 2008, 60 percent of Placer voters supported the state’s Proposition 8 gay marriage ban in November 2008, two points higher than Orange County. The county was recently cited as the state’s “worst offender” in the disgraceful practice of homeless dumping, wherein homeless people are rounded up and driven to neighboring counties and left there so the county can avoid any social or financial responsibility for them. Tom McClintock, an arch-conservative who boasted on his 2008 campaign website that his district is “widely considered to be California’s most conservative,” is the new congressman representing the Fourth District. McClintock is avowedly anti-choice and opposed to same-sex marriage–typical positions for conservative Republicans. He opposed the so-called “Lilly Ledbetter Act”–named for a female manager at a Goodyear tire plan in Alabama who learned that men with same position were paid significantly higher salaries–and bucked his own Republican Governor Arnold Schwarzenegger’s call for higher vehicle emission standards.

Compared to Orange County, Placer today is less diverse, less densely populated, older, and more rural. It also has higher high school graduation rates, and higher home ownership rates; in fact, its homeownership rate exceeds the average statewide and even in Orange County. Placer’s per capita building permit rate in 2007 was thrice that of Orange’s. The median home value in Placer now exceeds the statewide median and, although it lags slightly behind Orange County’s, when cost-of-living is taken into account any real difference evaporates. Likewise, Placer’s slightly lower median household income is compensated by its lower cost-of-living. 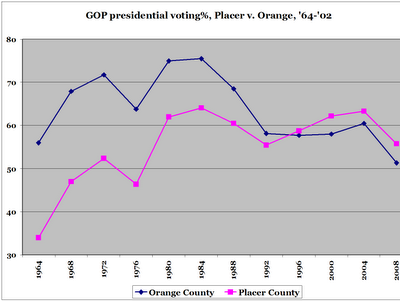 Meanwhile, the changes occurring in Orange have caused a steady retreat from its traditionally strong Republican roots. Carried by a Democratic presidential candidate just twice–by Franklin Delano Roosevelt in 1932 and 1936–Orange is fast becoming a purple county. In 2008, Barack Obama almost won it.

In the story of modern American conservatism, Placer is the new Orange. But that replacement is symptomatic of conservatism’s decline, because Placer is simply too small and remote to effect the kind of conservative revolution Orange County did a half a century ago. A rural outpost, Placer is a place to escape from, not push back against, the political changes occurring in America. The most fitting testament to this reality is the story of Tom McClintock himself, the man who in 2008 replaced the disgraced John Doolittle in Congress in California’s Fourth District. McClintock only beat Democratic candidate Charlie Brown by about two thousand votes in this Republican-leaning district. That he won so narrowly is almost certainly because McClintock, like so many other residents of Placer County and the Mountain region, is himself a carpetbagger. After representing Southern California’s coastal Ventura County in the state senate, when the Fourth District seat opened up McClintock moved north to run for the seat. Downstate, along southern California’s coastline, there was no district left for a state senator of his ideological bent to run.