Garrison Smith wasn’t expecting an athletic scholarship when he became a placekicker.

As soon as he started booting a football, the Ohio high school senior realized he had a knack for it. A soccer transplant, Smith wanted to continue his athletic career in football but had already accepted that he wouldn’t be receiving a full scholarship, at least not right away.

“You could say I picked the worst spot to be in,” Smith said. “[Colleges] don’t give money to kickers.”

Smith is one of the best prospects at his position, one of the most important in football — at least once the pressure is on and the game is on the line. Before that moment, though, kickers are treated like an afterthought — by the teams that will eventually count on them and by the schools that primarily spend their scholarships elsewhere.

Training for this specialized role begins in childhood, with training camps for potential kickers to help them make it in college. But the jobs available funnel quickly, from roster spots on hundreds of college football programs across all divisions to only 32 jobs in the NFL — maybe 33 if a team decides to carry two.1

When NFL kickers struggle or get hurt, teams rarely have an in-house backup ready to go.2 Replacement kickers typically have past experience in the NFL, but some have turned to other leagues or have been out of the game for a season or more, which was the case for three3 of the 43 kickers who have attempted a field goal this season. And once they make it, it’s still tough to stick around: Only 15 of the 32 kickers who played in Week 14 have been in their current stints with their respective teams for more than two seasons. 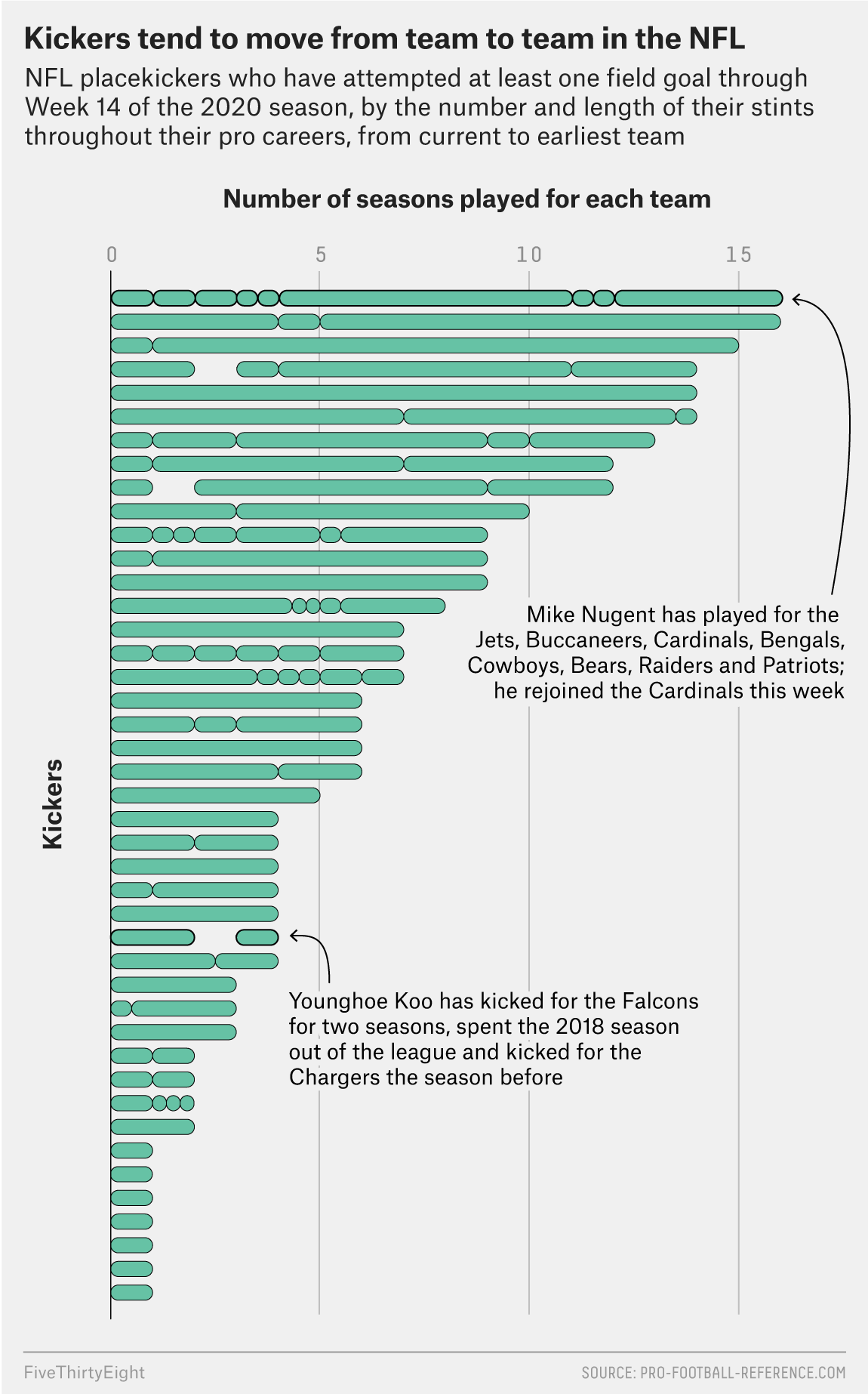 The resume of Atlanta’s Younghoe Koo is the epitome of a winding NFL kicking career. Koo, who kicked in college at Georgia Southern, won the job for the Los Angeles Chargers to start the 2017 season, but after missing on three of six field-goal attempts in his first four games, he was cut. He spent 2018 out of the league and joined the Atlanta Legends of the short-lived Alliance of American Football in early 2019. When the NFL season rolled around that year, Koo was signed to the New England Patriots practice squad, then released in mid-October. Two weeks later, though, opportunity knocked: The Atlanta Falcons cut longtime kicker Matt Bryant after Week 8 and signed Koo, who made his debut for the team in Week 9. Now in his second season with the Falcons, Koo is leading the league in scoring.

One day a club may be struggling to find a competent kicker, the next it might be sending out someone who wasn’t on the roster the day before to win the game. There’s nothing else like it in sports: Even goalies in hockey, one of the most specialized positions, have at least two backups and minor league depth.

[Related: Why Are We Still Returning Kicks In College Football?]

The NFL doesn’t have a minor league, but at the college level, finding a suitable kicker is a challenge on top of a challenge. In 2019, just 44 of 109 qualified college kickers4 in the Football Bowl Subdivision made 80 percent of their field-goal attempts for the season — and that was the high-water mark since 2010. 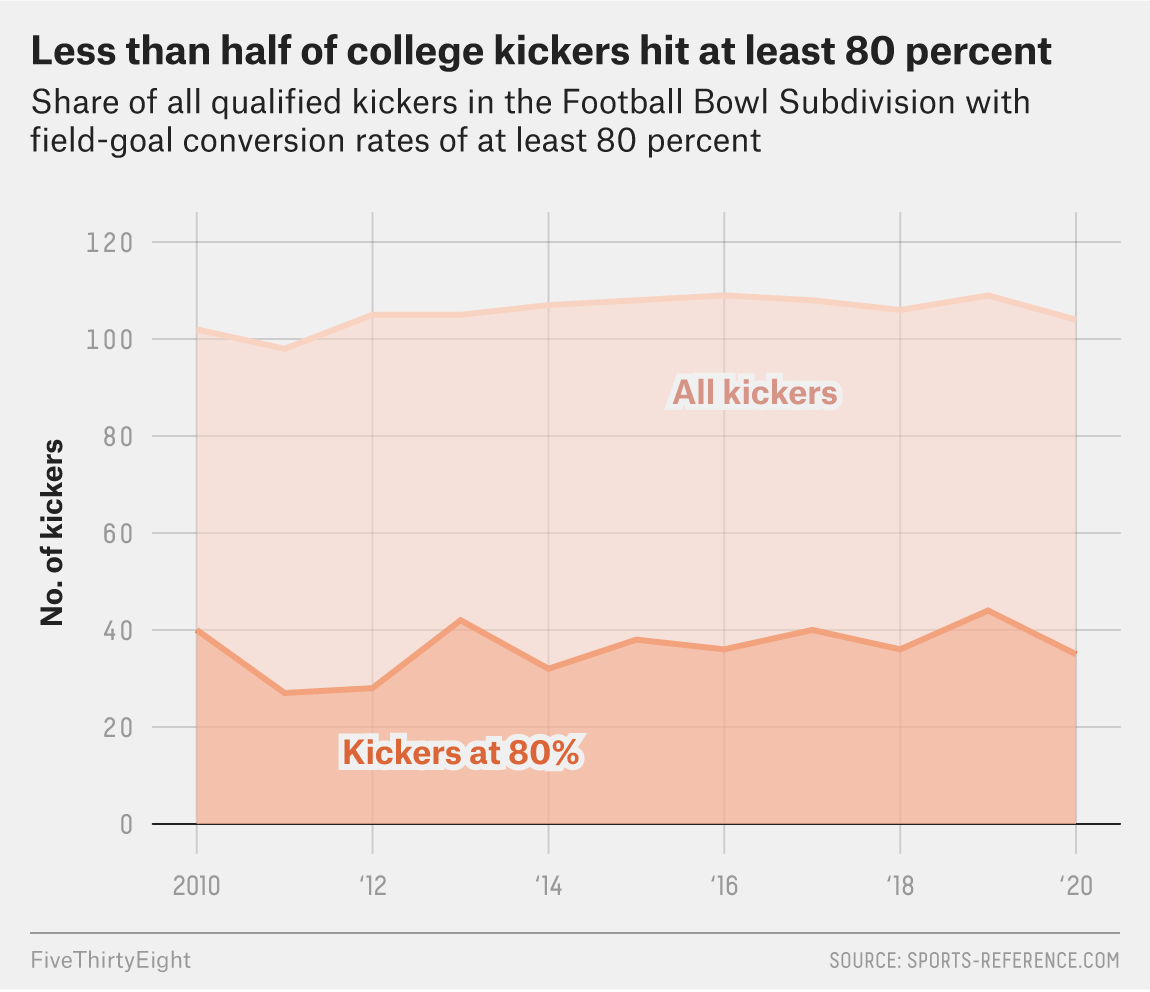 That’s not for a lack of options; there are just so many factors that go into making a top-notch kicker.

“The first thing that gets noticed is leg strength, and that’s from a young age and it’s a requirement,” said former NFL kicker John Carney, who now runs a coaching and mentoring service for kickers and punters at all levels. “It’s making that step to be a consistent player on a daily basis. You can have a bad game and get hurt at the college level, the secondary kicker steps in. In the NFL, the back step is out the door with a pink slip.”

Every year, hundreds of high school athletes pay to attend kicking camps, where they’re promised not only lessons, but also exposure. The ability to be seen by recruiters is a currency unto itself for elite teen athletes. But even with those camps, the art of fine-tuning a kicker into an elite recruit, destined to be at the top of their field, remains a mystery.

“It’s very hard to say like, ‘This guy is going to be amazing when they go to college,’” said Filip Filipović, a former NFL punter who runs The Kicking Coach camps. “From my perspective, usually the best kickers in college are the best [in their class] when they’re in high school. The recruiting process is different than it was 10 years ago, which is ranking kickers from the top ranked kicking camps.”

Filipovic said most high school kickers — and even some in college — fall into the position by accident. A player accustomed to another position discovered an ability to split the uprights, or the team had no one available and asked a soccer player who may never have attempted a field goal before.

That was the case, of course, with Sarah Fuller, who was called upon when Vanderbilt’s rostered kickers were out in late November because of a COVID-19 outbreak on the team. That situation hasn’t been unique to kickers; the Denver Broncos had to scramble to find a competent quarterback when all of theirs had been ruled ineligible to face the Saints last month, due to COVID-19 concerns. But other players within the Broncos’ franchise had at least thrown a football before. How many have ever kicked?

In today’s youth sports landscape, athletes specialize early. Recruits can be ranked nationally by the time they’re in eighth grade, and they have their sights set on statistical benchmarks throughout their high school years. In the most visible sport in the country, the youth kicking market is still a niche, filled with both uber-competitive kickers, who have made it their goal to earn a scholarship off the power of their leg, and those accidental talents who discover late they have a knack for it.

Smith realized he could kick a football after his freshman season of soccer. He learned quickly how much work has to go into the position to reach the next level, even when that opportunity is far from guaranteed.

“I don’t think I ever had a camp where I wasn’t producing,” Smith said. “You have to get your name out there. These camps cost a lot. You don’t need to go to like nine camps, just like two or three. That’s what I would say is the best to do. I went to five or six [this year], but two or three is good to start out.”

While most football players are ranked and recruited well before they commit to a college, kickers are more of a wild card. There’s no central, perfected kicker ranking system, and Filipovic said they’re often recruited — as walk-ons, to boot — through word of mouth or by cold-calling recruiting camps for their top talent.

Those who pay to take part in those camps are often paying in hopes of just that.

[Do NFL Teams Really Get A Bounce After Firing Their Coaches?]

“[College recruiters] look at top-five, top-10 guys from various camps and see which ones they like best and try to get them as cheap as possible,” Filipovic said. “To be a scholarship kicker these days is a lot more difficult now. There’s so many college Division I level kickers in the country, and they’re doing walk-on tryouts.”

Jamie Kohl, a former college kicker, runs placekicking camps across the country. He has worked as an adviser for the Chicago Bears for the past two seasons and compiled rankings for ESPN for 12 years. He says the challenge lies in teams not wanting to carry two or three scholarship kickers when, during the course of a season, typically just one is seeing time.

“It’s become harder,” Kohl said. “Each program generally has three scholarships allocated to kickers, punters, snappers. Those numbers aren’t changing. It’s really hard to get one. There are years the big colleges don’t offer any because their kicker is already a freshman or a sophomore.”

Carney said schools aren’t looking for kids who have decent camps or a one-time stellar performance, but someone who is consistently better than the rest of the 1 percent of the best kickers in the country.

“There’s a lot of kids going to those camps, and they rank around 30th, and it doesn’t get them anywhere,” he said. “I mean, it looks good because you can pull it up on a computer and say, ‘I’m the 30th best kicker in the nation.’ But the camps are really emphasizing and pushing their top — especially those who are usually in the top 15.

“I’ve had a lot of young specialists that have gone to ranking camps, and they were disappointed that they weren’t getting the exposure they thought they would, but they just didn’t rank high enough. But that’s the formula, and it’s been a very good business model for ranking camps and the people that run those.”

This system works for the camps and the schools, but for the kicking prospects, it’s still a costly path for a maybe.

The Kohl’s Camps “Gold Package” — which promises exposure and an opportunity to be nationally ranked, along with a one- or two-day camp and a showcase appearance — costs $795. The premier “exposure package” is $4,000. Filopovic’s camps generally go for between $200 and $400, also promising exposure.

The bottom line is that exposure doesn’t come cheap, even for the best kickers, who risk going unnoticed if they don’t attend any camps and earn a ranking. The ones who are recruited to one of just 130 FBS schools are likely to walk on to their teams and hope to earn a scholarship down the road, after competing for a roster spot.

“It’s really competitive, but we all support each other,” Smith said. “I know I might not get an offer from California, so when I see a guy get an offer there, you feel good for them. It’s something they’ve earned. You’re trying to do the same thing.”

So where will Smith end up? He has received walk-on offers, including at the University of Cincinnati, but he hasn’t made a decision yet on where he will kick next. His hopes are still alive, though, that he’ll be able to grab one of those elusive NFL jobs — to be one of the few to kick for a living.

Marisa Ingemi is a Seattle-based sportswriter with a history of NHL beat reporting, women’s sports analysis, lacrosse breaking news and feature writing. She has been published in The New York Times, Boston Globe, Vice, espnW and Yahoo Sports, among many others. @Marisa_Ingemi