The Philadelphia 76ers are in a bit of a tailspin right now. Monday night’s loss, against a San Antonio Spurs team that was sitting both Tim Duncan and Tony Parker, was Philadelphia’s 17th straight to start the season, a franchise record and one shy of the all-time NBA record set by the New Jersey Nets in 2009. It’s been 230 days since the Sixers won a basketball game.

Back in mid-November, our friends at the Harvard Sports Analysis Collective anticipated the Sixers’ woes and computed the odds of the team’s season-opening losing streak reaching various lengths. The chances of a 17-game streak back then were just 20 percent; Philadelphia still had to lose a few theoretically winnable games (of course, it obliged). Now we need to update the probabilities and ask just how long this Sixers skid might last.

To do that, we’ll turn to FiveThirtyEight contributor Mike Beuoy’s betting-market-based team ratings, which use the gambling lines from every game to derive each team’s “generic points favored” (or the amount by which we’d expect the team to be favored against an average team). The final scoring margin in an NBA game can be approximated by a normal random variable with a mean of the Vegas line and a standard deviation of 12. So we can generate win probabilities for every game left on the Sixers’ schedule, then run 1,000 simulations of the rest of their season and determine the odds of their streak reaching a given number of losses. 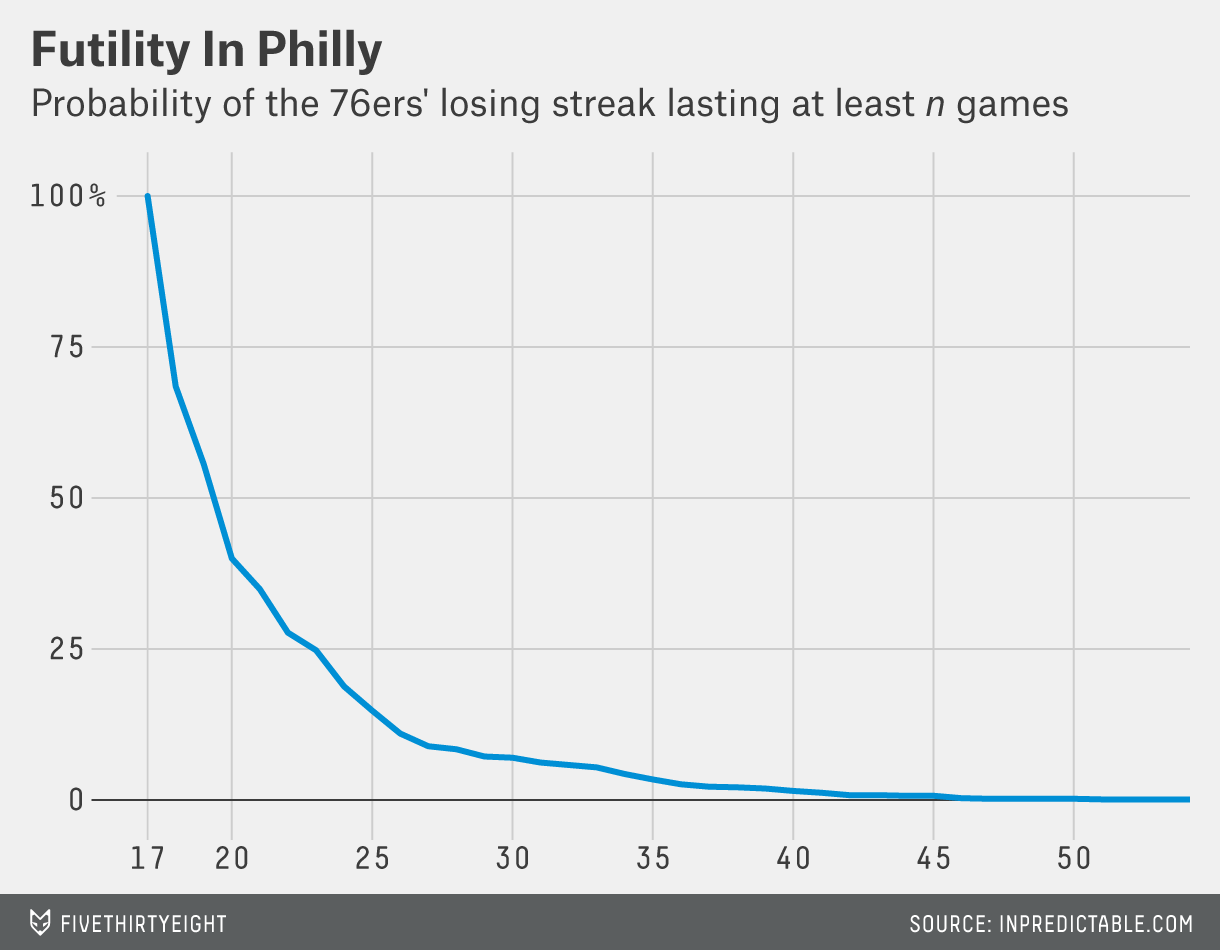 In our set of 1,000 simulations, Philadelphia’s losing streak has an average length of 20.7 games. The streak most commonly ends with a victory Wednesday night against the Minnesota Timberwolves, a game in which the Sixers have a relatively high (by their standards) 30.9 percent probability of winning. In 60 percent of simulations, the streak ends sometime in the team’s next three games (the last of which is on Saturday night), and 91 percent of simulations see it end before Christmas.

However, there is one dark simulation in which the Sixers lose 54 consecutive games before finally snapping their skid against the Orlando Magic on Feb. 22, 2015. For the sake of my home city, let’s hope it doesn’t come to that.