With the South Carolina Republican primary race looking increasingly tight — the FiveThirtyEight forecast model gives Newt Gingrich a 25 percent chance of winning there based on the latest polling, up from 8 percent just two days ago — Mr. Gingrich will take any help that he can get.

Still, the boost that Mr. Gingrich may receive from Rick Perry dropping out and endorsing him may be more about perception than anything else.

As I did previously for Jon M. Huntsman, Jr., I looked at the second-place choices of Mr. Perry’s voters as reported by Public Policy Polling in the surveys it has conducted since Christmas. About 500 of Mr. Perry’s supporters were interviewed during this period in polls of Iowa, New Hampshire, South Carolina, Florida, North Carolina and Texas.

Among these voters, second-place support was about evenly divided among three candidates: Mr. Gingrich was listed by 22 percent of Mr. Perry’s supporters as their second choice, but Rick Santorum and Mitt Romney were each listed as the second choice by 20 percent of Mr. Perry’s voters. Ron Paul had the support of 12 percent, while 26 percent picked another candidate or were undecided. 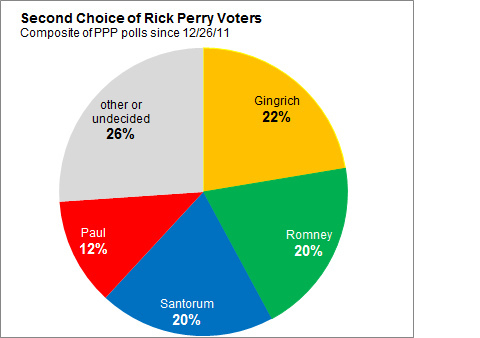 This analysis does not account for the fact that Mr. Perry plans to endorse Mr. Gingrich, something that could sway some of the undecided voters into his camp. Still, Mr. Perry was polling in the single digits in South Carolina. And some of the ground that Mr. Gingrich has gained there since Monday night’s debate has come at Mr. Perry’s expense, so the voters who were most amenable to switching to Mr. Gingrich may already have done so.

Instead, the main way this may aid Mr. Gingrich is by generating a strong headline for his campaign and entrenching the sense among the news media that he has the momentum in the race. That could be helpful to Mr. Gingrich given the complex story lines of the past few days.