Many people in the Northeast are getting a rare work-from-home day Tuesday because of snow-related road and transit closures. Technology has made it easier for people in many sectors to work from home, and therefore has made it harder for them to enjoy a snow day off. Yet work-from-home days remain more the exception than the norm.

The percentage of workers age 16 and older who worked from home in 2013 was just 4.4 percent, according to the Census Bureau’s American Community Survey, which asked respondents where they worked the previous week. That was just 0.1 percentage point higher than three years prior; growth slowed from earlier in the Internet era. (Rates of working from home, and of growth in the practice, vary depending on how the practice is defined and measured.) The New York and Philadelphia metro areas, which were expected to be hit hard by this week’s storm, have lagged behind the national rate; the Boston metro area was just ahead of it. 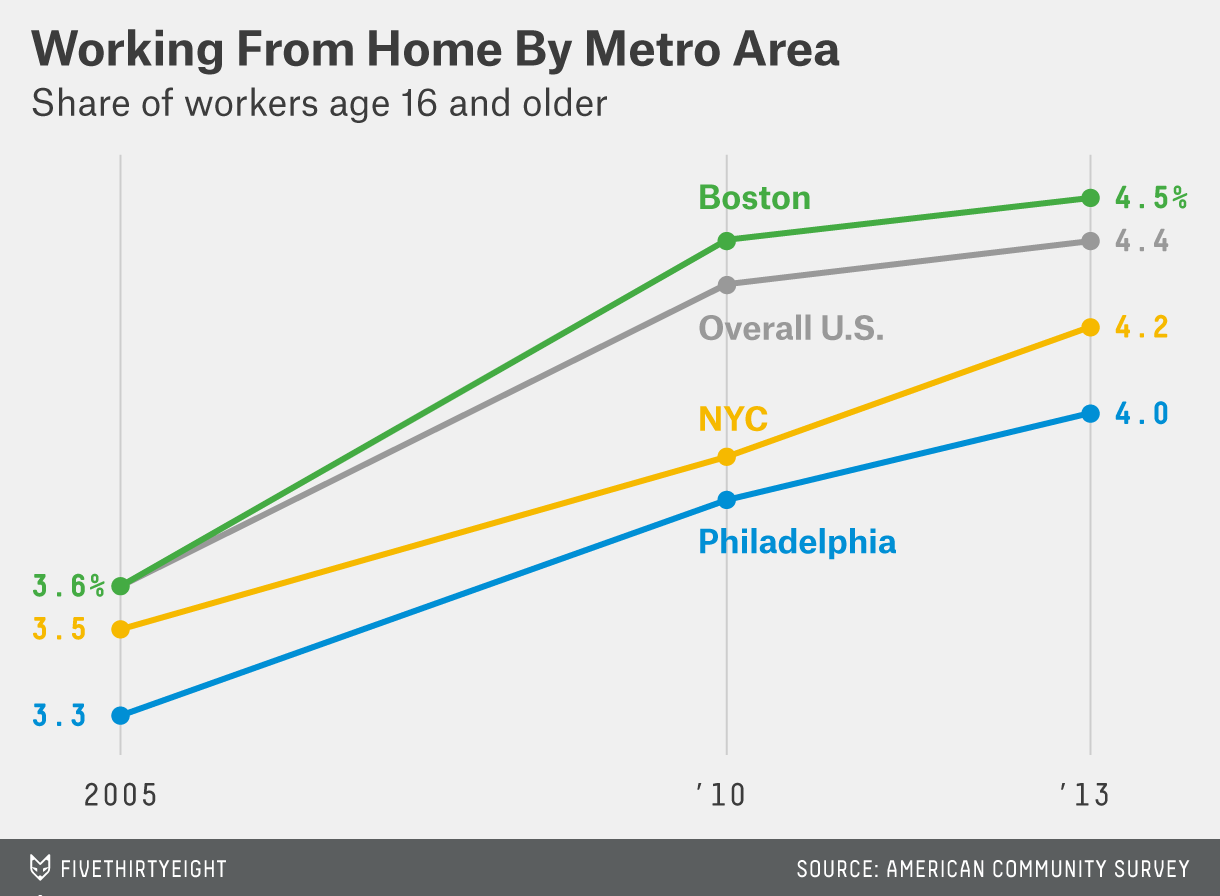 That percentage varies by industry, in part because some jobs can’t be done remotely.

Bosses’ reluctance to let employees work from home persists despite the widely reported findings of a study by Stanford and Beijing universities that showed home workers were more productive. The study, a rare randomized controlled trial of a large business, was conducted over nearly nine months between 2010 and 2011 at Ctrip, a Chinese travel agency. The company asked 996 employees in its Shanghai call center whether they wanted to work from home. Nearly half said yes, and half of that subset were qualified to do so. Half of that group — 131 employees — were randomly assigned to work from home, based on having been born on an even-number day of the month. The home workers completed 13 percent more calls than they had finished before working from home, in part because they worked more minutes and in part because those minutes were more productive. As measured by rate of conversion to sales, and by supervisors’ monitoring, calls were no worse for the home workers. 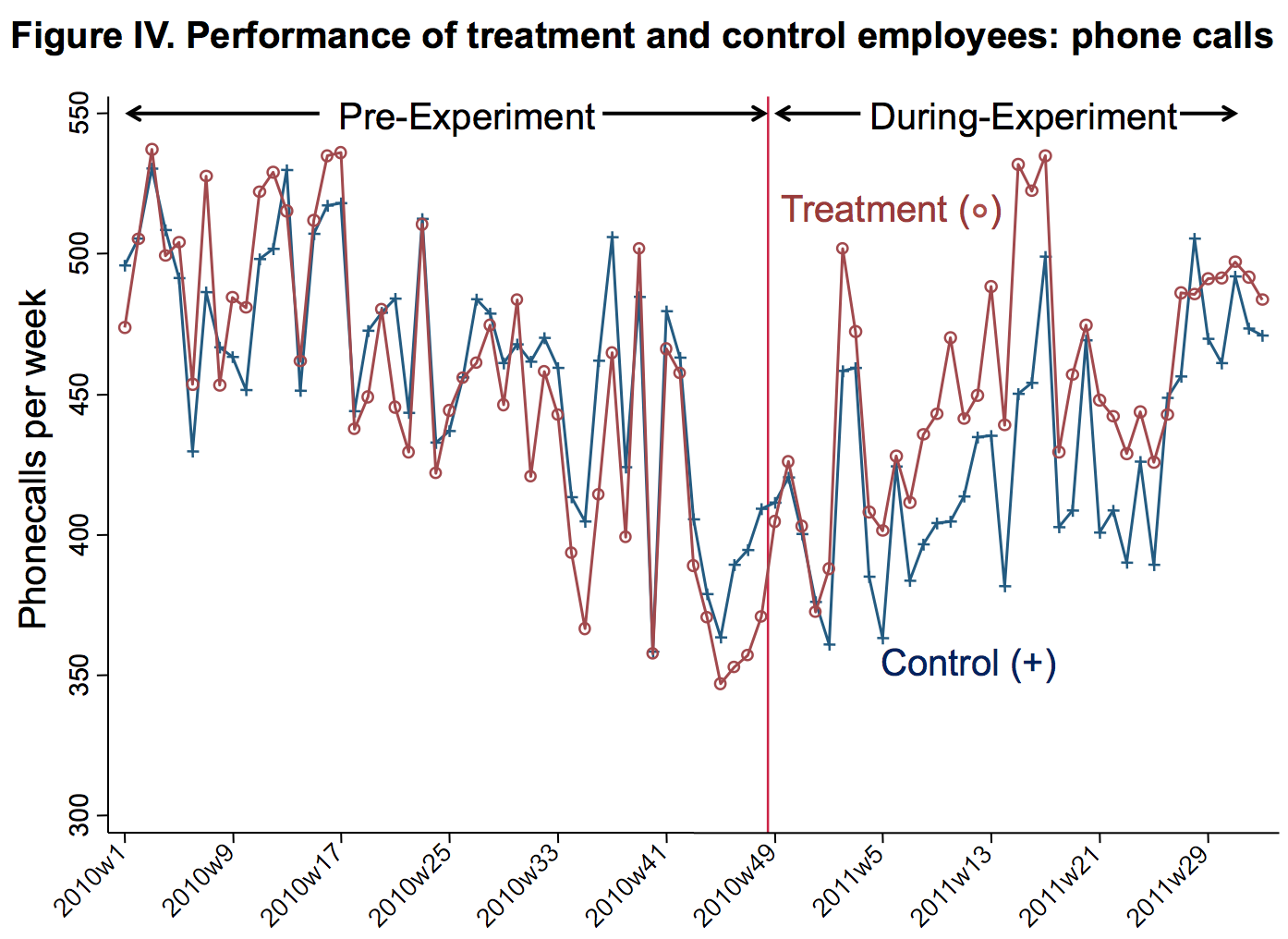 The study, slated to be published this year in the Quarterly Journal of Economics, doesn’t necessarily mean home workers during this week’s storm will experience a surge in productivity. Call-center workers work individually, and their performance is easily measured. People who volunteer to work from home, rather than being forced to by a storm, might be more likely to work better there. Ctrip and its employees had time to prepare for the shift, including optimizing home working environments — unlike Tuesday’s home workers, who might be sharing the computer and phone with children home on a snow day. And yet even with Ctrip’s prep time, home workers’ productivity initially fell because of what study co-author John Roberts calls “teething problems” with getting their network connection working properly.

Nonetheless, Roberts thought some companies would find benefits from having employees work from home during the storm, perhaps enough to let them do so more often. “I think a lot of people are going to be able to work from home very successfully who haven’t been allowed to do so, so there’s some learning opportunities there,” Roberts, a professor emeritus at Stanford’s business school, said in a telephone interview. The forced experiment “may give companies some evidence about whether they ought to let people work from home every once in a while, especially when they have things really better done in peace and quiet.”

Roberts, unlike workers in open floor plans, has peace and quiet in his university office. He nonetheless finds he is more productive at home for another reason cited by 1 in 5 home workers at Ctrip: the convenience of having the toilet, lunch and coffee at home. “For me, it’s a matter of some convenience issues,” he said. “I have some health problems and some mobility problems.”

Notwithstanding his study’s findings and his own experience, Roberts doesn’t think home-working boosts productivity for everyone. He recalls with some regret that he was critical, in media interviews, of Yahoo chief executive Marissa Mayer when she banned working from home in 2013. He later learned that some Yahoo workers were taking advantage of working from home to shirk their duties, and that Mayer’s attempt to reshape corporate culture depended on people being together in the office. Roberts says he and other critics “really misinterpreted” Mayer’s plan. In Yahoo’s case, unlike in Ctrip’s, he thinks encouraging home work didn’t make much sense.