bumped and rearranged for ease of reading -p 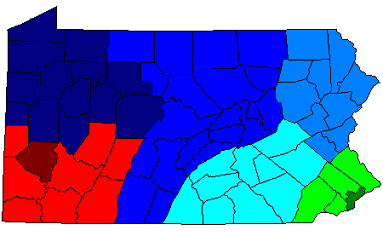 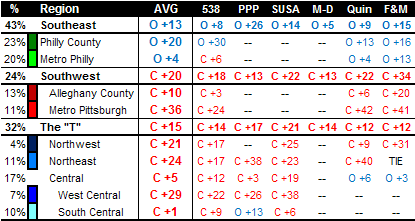 Two things you should not pay attention to tomorrow without proper context:

(1) Leaked exit polls, which have been way off this cycle, and been slanted an average of 7 points in Obama’s direction. A substantial Clinton lead in the exit polls might be taken modestly more seriously than, say, something that showed Obama three points ahead, but these things aren’t designed for what you think they’re designed for — just ignore them.

(2) Very early returns, such as in the first hour after polls close. Because there are such profound regional differences in the way that Pennsylvania polls, the results will be almost entirely a function of where the numbers are coming in from. Odds are that rural areas will report their results before the cities, which means that the early numbers should favor Clinton (this may actually be a nontrivial advantage to her in terms of media narrative; the race could very easily be called for her when the ticker shows Clinton ahead by 14, but things could close to within 8 points once all votes were counted).

However, you can pay a little more attention to the early returns by using the scorecard below, which lists the regional results from among five pollsters that provided these breakdowns, plus our regression-based estimate. For example, the polls say to expect about a 10-point margin for Clinton in Allegheny County (Pittsburgh) — if there are a substantial number of reutrns in from Allegheny and they’re showing a tie, that’s probably good news for Obama. Each pollster uses slightly different regional definitions so these are not exact, but I’ve done the best I can. I’ve also listed the approximate percentage of the electorate in each area.