As The New Republic’s Nate Cohn has observed, the presidential campaigns — especially Mitt Romney’s — have spent conspicuously little in advertising in a state that is traditionally regarded as one of the keys to the election, Pennsylvania.

This could reflect some tactical quirk — one campaign trying to lull the other into a false sense of security, for instance.

But assume for the moment that Mr. Romney’s campaign has decided that Pennsylvania is not a fruitful path to electoral victory. Is this a sensible conclusion? Personally, I don’t think so.

Pennsylvania won’t be the easiest state for Mr. Romney to win. As of Monday, our forecast model gave him only about a 20 percent chance of doing so. And there are some disadvantages to his trying to compete there.

First, it’s hard to move votes in Pennsylvania. Between blacks (and college students) in Philadelphia and Pittsburgh on the one hand, and the culturally conservative voters in central Pennsylvania on the other, a lot of the votes there are preordained. There are certainly some swing voters in the Philadelphia and Pittsburgh suburbs, but in general the demographics of the state make turnout there a bit more important than persuasion.

Second, the polls have been more consistent in Pennsylvania than in states like Michigan and Wisconsin. Mr. Obama has led each of the last 16 polls in Pennsylvania, but his margin was in the single digits in all but one of them. Greater consistency in polling also reduces the uncertainty in the forecast.

Nevertheless, our model classifies Pennsylvania as a “tipping point state,” which could conceivably be decisive in the electoral outcome. In fact, it ranked Pennsylvania as the second-most important state as of Monday.

There are two cases in which Pennsylvania could be an important state for Mr. Romney. One case is if he loses Ohio — and the other if he wins it.

Each day, our model runs a series of Electoral College simulations. Typically, we run 25,001 (the odd number is so that there are no exact ties), but I ran 50,001 on Monday to explore all the different permutations in a bit more depth.

The simulations evaluate the uncertainty in the outcome in each state, and how the states are related to one another. They consider the fact that some states are more similar to one another demographically, and therefore are more likely to move in tandem. They also consider that other factors, like a rising or falling economic tide, is likely to have some effect in all states.

From our set of 50,001 simulations, I looked for cases in which the following conditions held:

That is, these are cases where Mr. Romney won with somewhere between 269 electoral votes (an exact tie, but the model resolves most of these cases for Mr. Romney since Republicans are likely to control more delegations in the incoming Congress in the event that the 12th Amendment is invoked) and 288 — and with Pennsylvania in hand.

How often did these cases come up? Not very often — only about 450 times out of the 50,000 simulations, or just shy of 1 percent of the time.

But it’s important to consider the context. First, the model sees Mr. Romney as an underdog, albeit not an overwhelming one, to win the election. Second, some of the time that Mr. Romney does win the election, it will be in a blowout.

So, this might seem like a marginal case — but the electoral math matters only at the margin as well. There were only about 4,000 simulations in which Mr. Romney won the Electoral College by such a narrow margin. Compared to that, the 450 cases out of 4,000 in which Pennsylvania proved to be decisive are not trivial.

I then looked up the most common permutations of wins and losses in each state among these 450 cases. The three most common situations all involved Mr. Romney winning Pennsylvania as a substitute of sorts for Ohio: 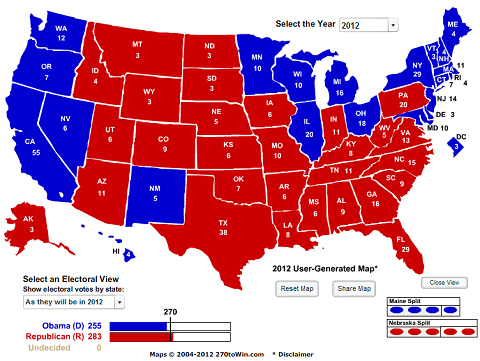 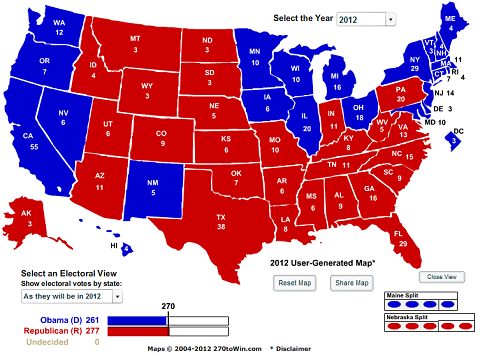 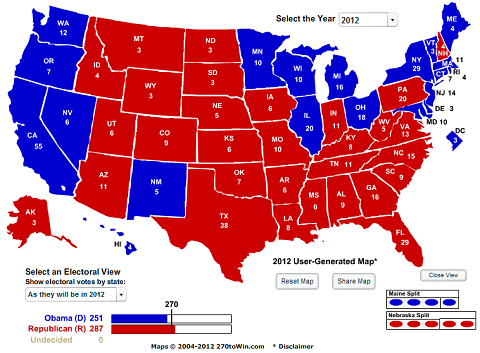 How plausible is it that Mr. Romney could lose Ohio but win Pennsylvania? It isn’t all that likely: Ohio is typically just slightly Republican-leaning, and Pennsylvania is normally Democratic-leaning by two or three points.

Moreover, the two states have broadly similar demographics — it’s hard to move votes in one state without affecting them in the other — something which the model considers.

Still, there’s enough uncertainty in the forecast that the case of Pennsylvania proving decisive should not be ruled out.

It’s plausible, for instance, that Mr. Romney’s opposition to the auto bailout will be more of a disadvantage in Ohio than in Pennsylvania, since the former state relies more on auto industry jobs. Meanwhile, the new voter identification laws in Pennsylvania could give Mr. Romney an extra point or two there, if they’re upheld by the courts.

Mr. Romney will be in fairly bad shape if he loses Ohio. But conditional upon that, Pennsylvania might be his least-bad alternative to pick up the requisite number of electoral votes. Wisconsin and Michigan, for instance, might seem like compelling alternatives — but they are typically a bit more Democratic-leaning that Pennsylvania, and Mr. Romney’s polls have been no better in them on the whole.

If Mr. Romney’s standing rebounds in Ohio — or if the polls suggesting he’s in trouble there are wrong begin with — he could rely on a Keystone-Buckeye parlay. For instance, if Mr. Romney won both Ohio and Pennsylvania, that might suffice for him to win the election despite being swept in the competitive states of the Mountain West, like Colorado and Nevada. 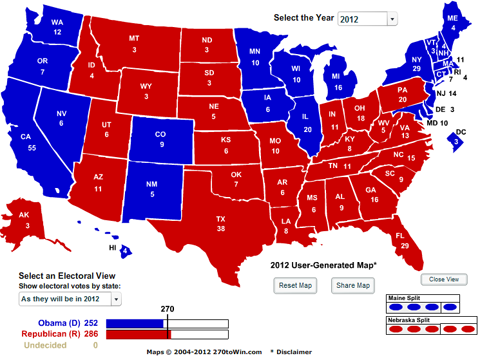 In fact, if Mr. Romney won both Pennsylvania and Ohio, he could afford to lose not just Colorado and Nevada (and New Mexico), but also Virginia. The map you see below is a winning one for Mr. Romney, 273 electoral votes to 265.

In other words, the best defense could be a good offense. If Mr. Romney locks down both Ohio and Pennsylvania, then Mr. Obama obviously has few winning maps.

To be sure, the question of how a campaign ought to allocate its resources is not straightforward. Our model’s simulations, I hope, do a reasonably good job of articulating the uncertainty in the forecast, and the relationship in the vote in different states. But they are built from historical data. If the campaigns adopt different tactics than past ones did (for instance, concentrating on a narrower range of states), they could make its empirical analysis less meaningful to the 2012 election.

Still, even if Mr. Romney’s campaign has reason to believe that Pennsylvania is not quite at the electoral tipping point, that does not necessarily mean that they should pull out of it. Expending some resources there would force Mr. Obama’s campaign to do the same. The state is certainly close enough — and it has been important enough historically — that neither campaign can really afford to call the other’s bluff.

Interestingly, in the waning days of the 2008 campaign, John McCain’s campaign concluded that Pennsylvania was its best shot of defusing Mr. Obama’s path to victory, and concentrated many of its resources there. Whether this was a good strategy is hard to say — the McCain campaign had a lot of bad options.

But we’re still in July — at least for a few more hours. Adopting such triage strategies is premature, especially in a state that has normally been so important to winning elections.