Patrick Mahomes played the best game of his young career Monday night against the Baltimore Ravens. The Kansas City quarterback passed for 385 yards and four touchdowns with no interceptions while rushing for a fifth TD, and he did it against a Baltimore team that boasted the best defense in football1 through two weeks of play. Mahomes’s Total Quarterback Rating (QBR) — ESPN’s signature metric that accounts for a quarterback’s value both passing and running the ball — was 97.7, tied for his career high.2

It’s no small thing to be on the receiving end of Mahomes’s best game. By halftime against Baltimore, he had become the fastest player to reach 10,000 regular-season passing yards in NFL history, two games quicker than Hall of Fame QB Kurt Warner. Mahomes also extended his career record against Lamar Jackson and the Ravens to 3-0. Yet of all the superlatives that describe Mahomes’s already amazing career — the 2018 league MVP, the youngest QB to win Super Bowl MVP, the highest-paid player in the NFL with a contract worth almost half a billion dollars — perhaps the most incredible is this: Mahomes has never had a below-average game since entering the NFL. 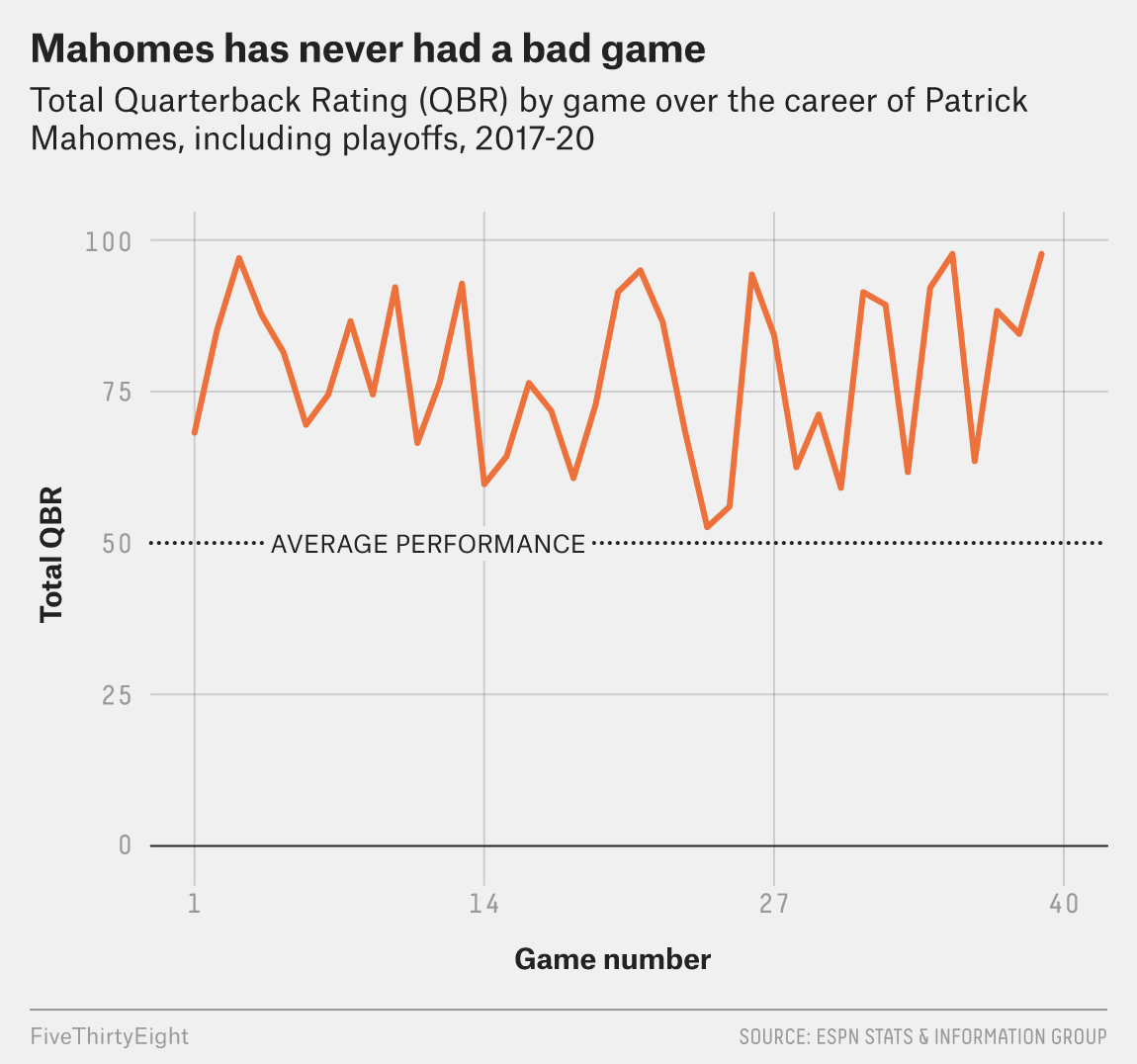 Mahomes’s “worst” game — if you can call it that — came last season at home against the Indianapolis Colts in Week 5. He posted a QBR of 52.6 in the game but still passed for 321 yards and a touchdown with no interceptions in the 19-13 loss.

Another team that has given Mahomes “trouble” is division rival Los Angeles. In five games against the Chargers, Mahomes has just one game of over 300 yards passing. And in two of the five games against L.A., he threw for less than 200 yards, earning Total QBR scores of 62.5 and 61.7. Still, containing Mahomes hasn’t translated into wins for the Chargers. Despite holding him to merely slightly above-average performances — no small feat! — the Chargers are just 1-4 against the Chiefs with Mahomes behind center.

The only team to consistently give Mahomes some measure of trouble — and also win — are the New England Patriots, the team the Chiefs will be playing this Sunday. In three games against head coach Bill Belichick and the Patriots’ defense, Mahomes and the Chiefs have won just once. Mahomes’s average QBR against the Patriots is 68.8, his second-worst rating among teams he’s faced more than once.

New England has been particularly adept at taking away Mahomes’s favorite receivers, which shouldn’t surprise anyone familiar with a Belichick game plan. In the three meetings between the two teams, Mahomes has a completion percentage well below what we would expect from an average NFL QB in similar situations.3

Yet despite New England’s previous success, our Elo model gives the Patriots only a 26 percent chance to beat the Chiefs on Sunday. With a short week to plan for New England, perhaps the odds of Mahomes having a less-than-incredible performance against the Patriots are decent, even if it doesn’t lead to a win.

When facing a player like Mahomes, who’s never had a truly bad game in his professional career, maybe that’s the best you can hope for.