Let’s say you run a grocery store. One of many problems you’ll face is what to tell your employees about managing food close to expiration. One option is to give them a set of rules (e.g. all fruit is thrown away after three days). Another option is to give them discretion (e.g. look carefully at the fruit after three days, but use your judgment when it comes to deciding what to throw away). The tradeoffs are clear: The rule approach means you’ll lose more fruit, but the discretion approach means there will sometimes be rotting fruit in the mix if your employees don’t do a good job.

This is a classic decision problem that comes up all the time. And it is perhaps nowhere more important than in medical decision-making.

Rule-based decision-making — for example, about treatment or testing — is extremely common in medicine. If you’re pregnant, for instance, the rules change the moment you cross into being over 35 rather than under 35. More tests, monitoring and concern go into the 35-years-and-one-month-old pregnant woman than the 34-years-and-11-months-old woman. Or consider prostate cancer screening: Decisions about whether to do a biopsy are often made based on a cutoff. A prostate-specific antigen (PSA) level of 4.1 warrants testing, but a level of 3.9 does not.

Virtually everyone would agree that having some rule-type guidelines like these to inform decision-making is useful. But most people would also probably agree that, especially in medicine, some discretion is valuable. A pregnant 34-year-old who has had two miscarriages should probably be considered higher risk than a 35-year-old with two healthy previous pregnancies. Doctors are highly trained, and there’s good reason to think they should use some discretion when treating patients.

This has huge consequences. Researchers have shown that infants born just above 1,500 grams are more likely to die in the first year of life than those born just below, despite the fact that, in theory, a higher weight should increase an infant’s odds of survival. This is shown in the chart below. In essence, because doctors are not using enough discretion — not acknowledging that infants just above 1,500 grams may be nearly as vulnerable as those below — lives are lost. 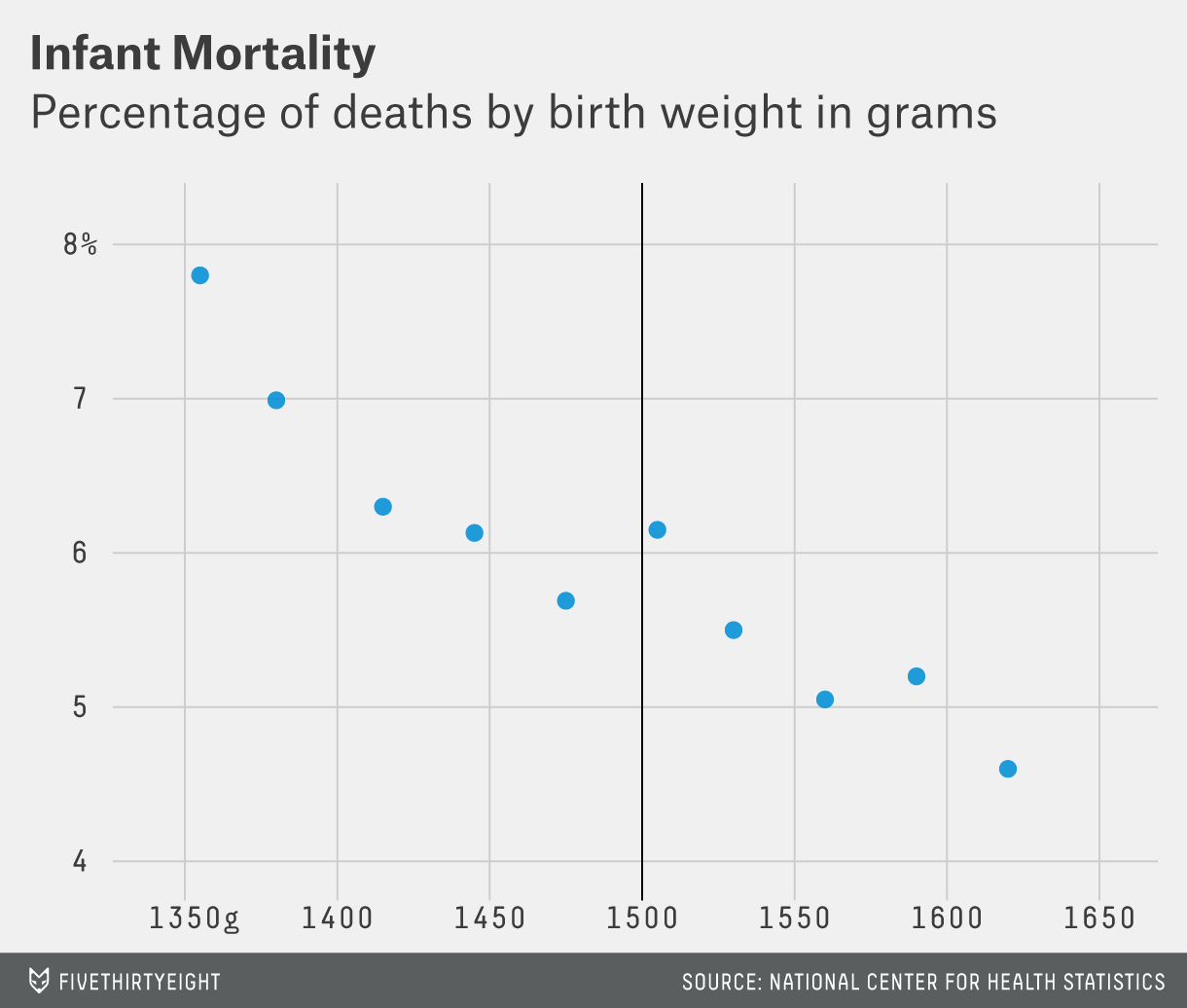 This is an example where the stakes are high, but we can also look at doctors’ reliance on rules in treating a more common health problem: high blood pressure, also known as hypertension. High blood pressure affects a large share of individuals — 60 to 70 percent of adults over 60 in the U.S. have levels high enough to be eligible for treatment. (Doctors typically treat hypertension with drugs such as beta-blockers or ACE inhibitors.) This year, a panel of experts set a higher bar for treatment for older individuals and for individuals of any age with diabetes or kidney disease. The main change affected the over-60 group: The target for blood pressure was raised from 140/90 to 150/90, effectively meaning that fewer individuals were classified as needing treatment.

This change in guidelines provides a nice laboratory to examine doctors’ reliance on rules. Typically, it’s hard to know whether doctors are sticking by a rule because it’s a compelling rule, or because they’re just prone to stick by rules. In this case, the fact that the guidelines changed shows there was conflicting evidence about whether the original 140/90 threshold was, in fact, a good threshold. If it had been crystal clear that doctors should prescribe medication for patients whose blood pressure is between 140/90 and 150/90, i.e. people with borderline levels of blood pressure elevation, then we would not have seen the rules change. Therefore, you’d expect in a case like this that even before the change in guidelines, doctors would have been relying less on the rule and using more of their discretion in treating patients in this gray area.

So I was interested to see this paper, which came out a few weeks ago, looking into this exact question. Researchers examined data from a federal survey conducted every two years, the National Health and Nutrition Study Examination Survey. The chart below shows the treatment levels of individuals over 60 in three groups: never hypertensive by either set of guidelines (that is, blood pressure readings below 140/90); always hypertensive by either set (higher than 150/90); and “switchers,” those who were classified as having hypertension by the earlier guidelines but not by the later ones (between 140/90 and 150/90).

On the one hand, this graph shows that doctors aren’t always sticking to the rules, because nearly half of the “never hypertensive” group are being treated and only about 60 percent of the “always hypertensive” group are being treated. (If doctors were sticking to the rules, you’d expect the percentages to be zero and 100 for each respective group.)1 On the other hand, it appears that doctors are sticking more closely to the rules right above the 140/90 threshold. Individuals in the gray zone, whose blood pressure is between 140/90 to 150/90, are more likely to be treated than those whose blood pressure exceeds 150/90.

In the end, although presumably there are dimensions on which doctors are exercising discretion, the cutoff rule seems to affect doctor behavior. Put simply: if you arrive at the doctor’s office with a blood pressure reading of 145/90, you’re about as likely to be treated as someone with a reading of 160/90, even though the evidence much more strongly favors the latter treatment.

Overall, the data appears to point to a heavy reliance — perhaps too heavy — on rules in medical decision-making. It is worth saying that some of this may be the fault of an insurance system that uses such rules in reimbursement decisions, but whatever the reason, discretion seems to fall a bit by the wayside. It is hard to know how to address this, because there are good reasons to have rules and guidelines. Perhaps a first step is just recognizing the problem: A temptation with sharp cutoff rules like those for hypertension and infant treatment is to start thinking that being just to one side of the cutoff versus just to the other actually matters. By recognizing that it does not, we can begin to make better choices.