Scott P. Brown’s decision not to run in a special Senate race in Massachusetts is a blow to Republican hopes of reclaiming the Senate. Mr. Brown might have had a 50-50 chance of capturing the seat formerly held by Secretary of State John Kerry. But Republicans as popular as Mr. Brown are hard to come by in Massachusetts.

We can define the 18 blue states as those that have been won by Democrats in each presidential election since 2000, and the 22 red states as those that have been carried by Republicans in each election during that period. Ten years ago, there were eight Republicans serving in the Senate from the blue states: Peter Fitzgerald of Illinois, Susan Collins and Olympia Snowe of Maine, Norm Coleman of Minnesota, Gordon H. Smith of Oregon, Arlen Specter and Rick Santorum of Pennsylvania, and Lincoln Chafee of Rhode Island. Only Ms. Collins still holds her Senate seat today. She is joined by three new colleagues (Mark Kirk of Illinois, Pat Toomey of Pennsylvania, and Ron Johnson of Wisconsin) who were elected in the Republican wave year of 2010. But the number of Republican senators in blue states has been cut to four from eight. 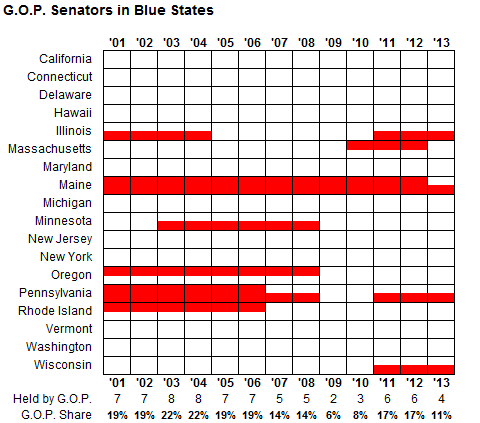 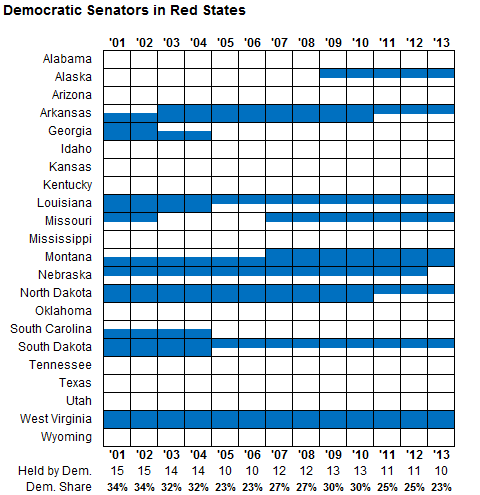 Most of the decline in the Democratic numbers has been concentrated in Southern and border states, which had sometimes been inclined to vote Republican for president but to elect moderate or conservative Democrats to Congress. Similarly, there are now only two Republican senators from New England (Ms. Collins and Kelly Ayotte of New Hampshire), down from five a decade ago.

The national parties (perhaps especially Republicans, but not exclusively so) have become less willing to tolerate ideological diversity within their ranks. And as behavior in Congress has become more parliamentarian, voters have become less willing to entrust office to politicians like Mr. Brown, whom they fear could facilitate his party’s agenda even if they agree with him on many of the positions he has stated.

Mr. Brown could instead choose to run for governor of Massachusetts: the field will be wide open in 2014, with the Democrat Deval Patrick retiring from office.

This might well be the better bet for Mr. Brown. State parties are freer to develop their own agendas and to cater to the voters in their state, without risking backlash from ideological national groups or Congressional leadership. 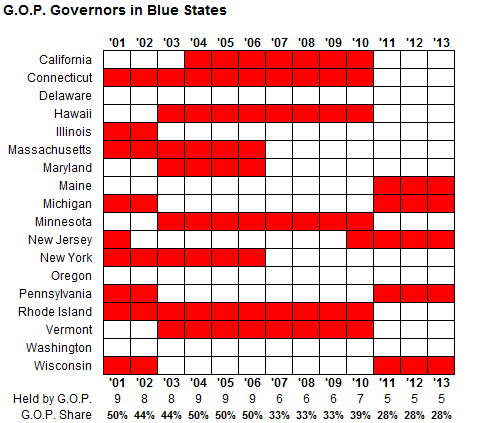 These numbers have also been on the decline, however. As recently as 2006, fully half of the blue states had Republican governors. 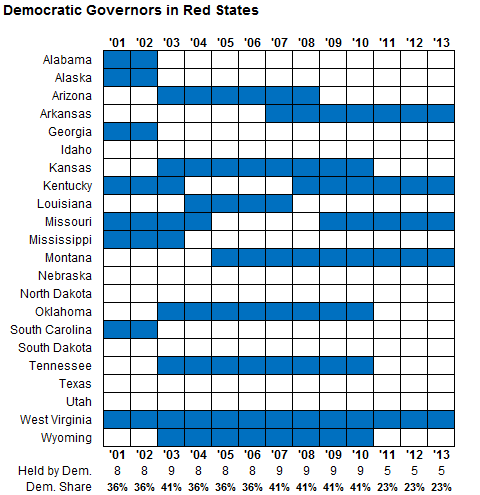 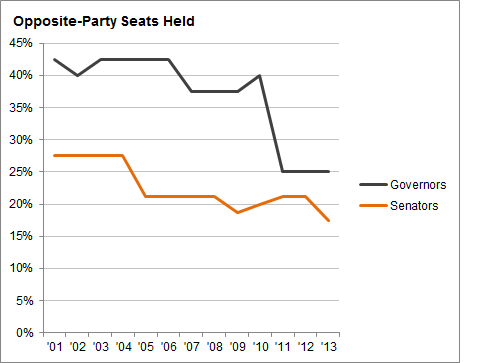 Apart from Mr. Brown if he runs for governor, there do not appear to be very many candidates who have much shot of cutting against the partisan tide in their states in 2013 or 2014. Instead several of the more competitive gubernatorial contests are likely to be those in which the parties have a chance of reclaiming their home turf. Democrats have a reasonable chance to win the governor’s race in blue-state Maine, for example, now held by the Republican Paul LePage, while Republicans may do so in Arkansas, where the Democrat Mike Beebe will be subject to term limits.

Democrats, meanwhile — if they have been relieved of the burden of a toss-up Senate race in Massachusetts – will have to hope that the increasing correlation between presidential and down-ballot voting dissipates. In 2014, they will have five senators up for re-election in red states — not counting Jay Rockefeller of West Virginia, who is retiring, and whose seat is more likely than not to go Republican. Just one blue-state Republican senator, Ms. Collins, is up for re-election.