Mark Blumenthal at Pollster.com has taken my idea and done it one better, plotting self-reported partisan identification not just for the six surveys that I identified earlier, but for all national polls since September 1, 2008 that have published such data.

Mark’s chart shows less of a decline in Republican party identification than mine did — perhaps three points since Election Day, and no visible decrease since Inauguration Day.

More data is almost always better, and this is probably no exception. The one modification I might suggest is to limit the analysis to surveys that are published on a regular basis, such that trendlines are easier to derive. The eleven national surveys that have at least five observations in Mark’s dataset are: Rasmussen, NBC/WSJ, Diageo/Hotline, CBS/NYT, Democracy Corps, ABC/Post, FOX, Gallup, Pew, AP-GfK and Ipsos. If we limit the analysis to these organizations only, we see what looks like a hybrid between Mark’s chart and my original, with a slightly more noticable decline by Republicans since Election Day and a slightly larger increase by independents: 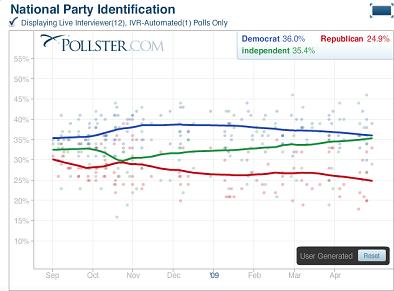 While these numbers aren’t good for Republicans, I have somewhat more question now about whether this is a new phenomenon, or this is the continued manifestation of the same phenomenon — the broad distaste for the Republican Party that we have been observing since at least mid-2006. If the “true” number of Republicans is about 25 percent, then surveys that end up on the low side of the margin of error, or which have Democratic-leaning house effects, are not infrequently going to show “shockingly” low numbers of Republicans, such as 21 percent, 20 percent, or even 18 percent. On the other hand, other regularly-published national surveys show the Republicans’ numbers in the high 20’s or low 30’s.

It’s probably also the case that whether Republican party identification is in fact continuing to decline or merely flatlining at a low number is somewhat immaterial from the standpoint of the party’s strategy. If only a quarter or so of the country identifies itself as Republican by the time we get to November 2010, the Democrats will probably gain another couple of seats in the Senate (principally because of the numerous retirements from Republican incumbents), while maintaining a large enough majority in the House to essentially give them carte blanche — they will also have the White House through at least January, 2013, of course. Partisan identification ebbs and flows — it does so more than many Democrats, who have recently had the better of things, would like to acknowledge. But the ebbs and flows can sometimes be years or even decades long and the GOP probably needs a better strategy than doing the same old thing and merely hoping for a reversal of momentum.