For a moment Wednesday, it seemed like the environment, unlike nearly everything else in Washington, was a nonpartisan topic. Ninety-eight senators voted to pass a resolution declaring that “climate change is real and not a hoax.” (Republican Roger Wicker of Mississippi was the lone no vote.) The vote was meant to force Senate Republicans to take a stand a day after President Obama critiqued Republicans for refusing to acknowledge the scientific consensus that climate change is happening due to human activity. (Republicans cut Obama’s jab from their “enhanced webcast” of the State of the Union speech.) Those 98 votes would seem to be a sign that Republicans had taken Obama’s criticism to heart.

But notice the resolution stated only that global warming is happening, without pointing to a cause. That omission allowed Republican Jim Inhofe of Oklahoma, author of “The Greatest Hoax: How the Global Warming Conspiracy Threatens Your Future,” and other Republicans to vote for the measure without letting go of assertions that humans aren’t responsible. “Climate is changing, and climate has always changed, and always will, there’s archeological evidence of that, there’s biblical evidence of that, there’s historic evidence of that, it will always change,” Inhofe declared on the Senate floor. “The hoax is that there are some people that are so arrogant to think that they are so powerful that they can change climate.”

Another amendment by Hawaii Democrat Brian Schatz stating that “human activity significantly contributes” to climate change garnered 50 votes, including those of Republican Sens. Lamar Alexander of Tennessee, Kelly Ayotte of New Hampshire, Susan Collins of Maine, Lindsey Graham of South Carolina and Mark Kirk of Illinois. But it failed to get the 60 votes needed to pass.

Climate change is as partisan outside Congress as it is inside it. Findings from a nationally representative survey conducted by the Yale Project on Climate Change Communication and the George Mason University Center for Climate Change Communication last April (the charts below are from that survey) show that while a majority views global warming as real, Republicans are far less likely to support that view than Democrats and Independents are. In that sense, Congress is more united than the electorate. 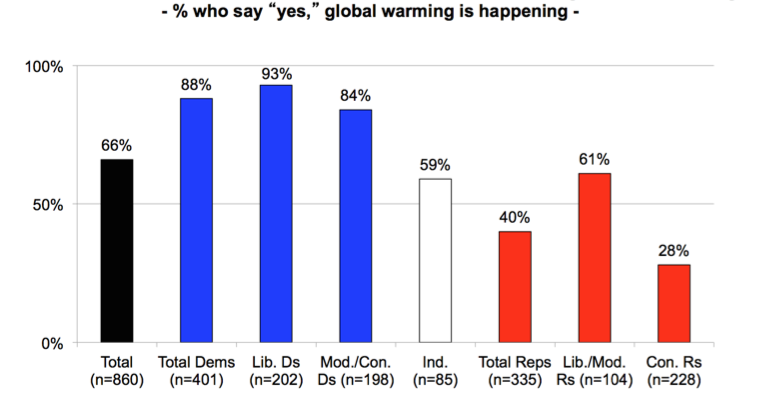 While a clear majority of Americans believe global warming is happening, a slimmer majority agree with the scientific consensus that humans are responsible. Democrats are more likely than Republicans to support that view. The following are responses to the Yale/George Mason University poll question: “Assuming global warming is happening, do you think … ?” 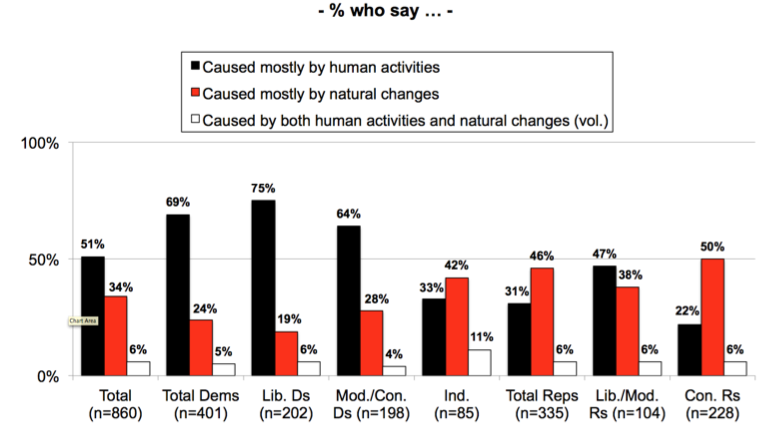 This week’s posturing hints that Democrats plan to exploit the climate change issue in the next election. Polling suggests that may be a promising strategy. A USA Today poll conducted in November found that 63 percent were in favor of President Obama’s agreement with China to stem global warming. A nationally representative survey of 860 registered voters conducted on April 11-24, 2014 by the Yale and George Mason groups found that a majority of voters — Democrats, liberal and moderate Republicans, and Independents — are more likely to vote for a congressional or presidential candidate who strongly supports action to reduce global warming. “Only conservative Republicans are less likely to vote for such a candidate,” the report said.

Of course, science doesn’t work by popular vote. But the debate over climate change has never been about science, and that’s unlikely to change anytime soon.