More than 400 years after Shakespeare wrote it, we can now say that “Romeo and Juliet” has the wrong name. Perhaps the play should be called “Juliet and Her Nurse,” which isn’t nearly as sexy, or “Romeo and Benvolio,” which has a whole different connotation.

I discovered this by writing a computer program to count how many lines each pair of characters in “Romeo and Juliet” spoke to each other,1 with the expectation that the lovers in the greatest love story of all time would speak more than any other pair. I wanted Romeo and Juliet to end up together — if they couldn’t in the play, at least they could in my analysis — but the math paid no heed to my desires. Juliet speaks almost as much to her nurse as she does to Romeo; Romeo speaks more to Benvolio than he does to Juliet. Romeo gets a larger share of attention from his friends (Benvolio and Mercutio) than he does from Juliet; Juliet gets a larger share of attention from her nurse and her mother than she does from Romeo. The two appear together in only five scenes out of 25. We all knew that this wasn’t a play predicated on deep interactions between the two protagonists, but still.

I’m blaming Romeo for this lack of communication. Juliet speaks 155 lines to him, and he speaks only 101 to her. His reticence toward Juliet is particularly inexcusable when you consider that Romeo spends more time talking than anyone else in the play. (He spends only one-sixth of his time in conversation with the supposed love of his life.) One might be tempted to blame this on the nature of the plot; of course the lovers have no chance to converse, kept apart as they are by the loathing of their families! But when I analyzed the script of a modern adaptation of “Romeo and Juliet” — “West Side Story” — I found that Tony and Maria interacted more in the script than did any other pair.2

All this got me thinking: Do any of Shakespeare’s lovers actually, you know, talk to each other? If Romeo and Juliet don’t, what hope do the rest of them have?

Many famous Shakespearean lovers don’t spend much time in conversation. “Twelfth Night” is particularly egregious: Viola supposedly loves Orsino but spends more time talking to Olivia. Olivia falls for Viola’s brother, Sebastian, after speaking a mere 23 lines to him, 12 of which are a marriage proposal. Similarly, “A Midsummer Night’s Dream” features four pairs of lovers, yet none is ranked as the closest pair by my algorithm.

Still, “A Midsummer Night’s Dream” delights in the swift and fickle nature of love. Not all of Shakespeare’s lovers spend so little time conversing. “Antony and Cleopatra,” for example, deserves its name: The titular pair speaks nearly twice as much as any other pair in the play (and more than any other pair of lovers I examined). And though the lovers in “The Taming of the Shrew” and “Macbeth” may not have ideal relationships, it’s not for want of talking — both sets of lovers speak more to each other than they do to anyone else. Portia and Bassanio, the lovers in “The Merchant of Venice,” also emerge as more connected than any other pair in the play (although Lorenzo and Jessica, minor lovers, do not).

Here are all the plays I examined ranked by how often their lovers converse: 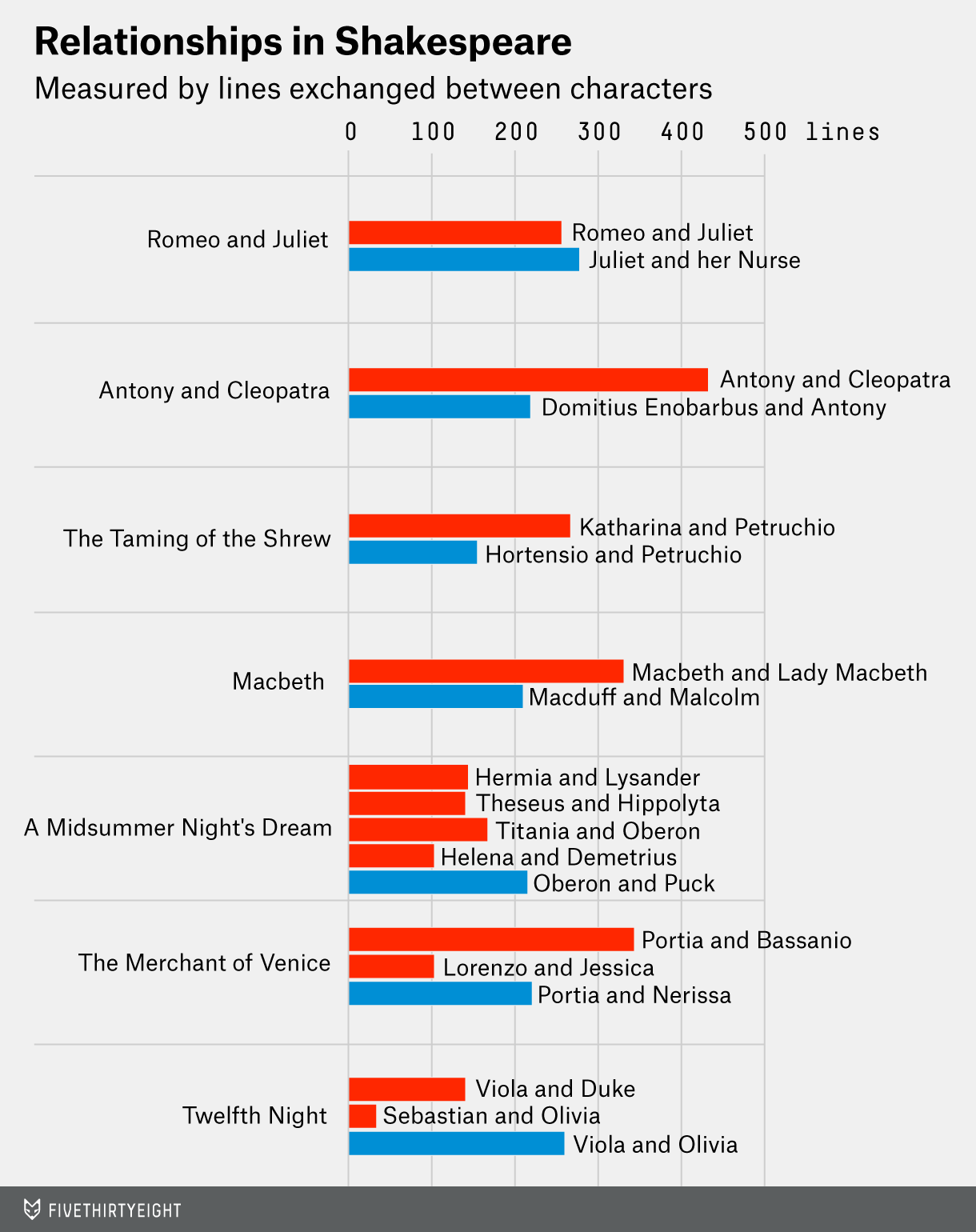 I also created this interactive visualization to map out how characters connect in each of the plays. It shows that the line-count method does provide some insight into the structure of a play. In “A Midsummer Night’s Dream,” for example, characters split into three distinct clusters, whereas in “Antony and Cleopatra,” most characters orbit the lovers.

The plays with the most connected lovers seem to be the ones with strong women: “The Taming of the Shrew’s” fiery Katharina, “Macbeth’s” homicidal Lady Macbeth, “The Merchant of Venice’s” brilliant Portia, and “Antony and Cleopatra’s” seductive and defiant Cleopatra. In general, Shakespeare’s female lovers lavish a larger share of their lines on their men than the men do on them. This is true not just of “Romeo and Juliet,” but of “Macbeth,” “The Taming of the Shrew” and all four couples in “A Midsummer Night’s Dream.” The only real exceptions, tellingly, occur in the plays where the women pose as men: “Twelfth Night” and “The Merchant of Venice.” (Antony and Cleopatra spend roughly equal shares of lines on each other.)

One might wonder, of course, how much of Shakespeare’s complexity a computer can capture. When I ran my analysis past Roland Greene, a Shakespeare scholar at Stanford, he did not banish me to Mantua — out, damned statistician! — but he did note that a line count is a highly imperfect measure of love. On the one hand, there are the lovers who need few words to express deep feeling. Surely the perfect sonnet that Romeo and Juliet exchange on first meeting means more than 14 random lines? At the other extreme, there are the Macbeths. Their murderous collusion may be lengthy, but would we call it love? Then there are pairs whose exchanges dominate the plot but are platonic: Puck and Oberon, who make fools of the lovers in “A Midsummer Night’s Dream,” or Viola and Olivia in “Twelfth Night.”

Love’s complexities exceed the line count, and we see this in the real world as well. Couples, for example, show a sharp drop-off in how often they communicate on Facebook after they announce their coupledom on the social network, but that probably isn’t because they’re less close: It’s because they’re going on dates instead. Similarly, couples tend to be less happy if the man in the relationship texts more, but that’s probably because he’s using texting as a surrogate for personal interaction.

If there’s a lesson that Shakespeare’s lovers share with real ones, it’s that the most meaningful interactions may not be textual at all. Romeo and Juliet’s wedding night is not portrayed in the play, for example, and the most important moments in the lives of real-world couples might remain similarly invisible. Which is disappointing if you’re a data scientist or a theatergoer, but perhaps not if you’re a romantic.

CORRECTION (Sept. 23, 9:40 a.m.): The original analysis left out the character of Lord Capulet in “Romeo and Juliet,” affecting some of the line counts for characters in the play as a result. Juliet does not speak more to her nurse than she does to Romeo, and Romeo does not speak more to Tybalt than he does to Juliet. The text has been updated to reflect changes in the analysis after accounting for Lord Capulet. In the chart, the number of lines exchanged between Romeo and Juliet should be 255, and the number of lines exchanged between Juliet and her nurse should be 247.