…or so, at least, I predict. And I’m putting my money–and stomach–where my keyboard is, as Nate and I made a two-part bet. We wagered a steak dinner on whether or not Sarah Palin runs for the Republican nomination, me betting she doesn’t. We have a second wager on whether she wins the nomination, with me giving Nate 3:1 odds on a cash bet of undisclosed amount that she doesn’t. (The second bet is not conditional on the first: If Palin doesn’t run at all, I win the steak and the cash.)

Wagers aside, in this post I’ll make the case for why I don’t think Palin will win and may not even run, and at some future point Nate will provide his response. A new Rasmussen poll shows her trailing by significant margins in head-to-head matchups with Mike Huckabee and Mitt Romney. But more on that in a second. Appropos of any sequential decision tree, I will work backward from Palin’s prospects of winning the general, to winning the nomination, to the calculus for her even entering the primary in the first place.

For starters, winning the White House against an incumbent is more difficult than in an open-seat year. In the concluding chapter of The Elections of 2008, Yale political scientist David Mayhew pulls back the lens on presidential electoral history to reveal a simple but compelling fact: When an incumbent runs, the party in power wins about two of every three times, but when the seat is open the party in power wins only about half the time. The two-thirds pattern has held more recently, too: Since World War II, there have been 10* elections in which the incumbent–whether he won a first term or succeeded to the White House by death or resignation–has run for re-election: ’48, ’56, ’64, ’72, ’76, ’80, ’84, ’92, ’96 and ’04. And the incumbent, and thus the party in power, won seven times.

So a strategic politician seeking the Oval Office should, all else equal, wait until she is not running against an incumbent president enjoying the many advantages incumbency provides, from access to the bully pulpit to control over the levers of government. History says the odds are better if you wait.

But all is not equal every cycle, of course, and maybe the national political environment by late 2010 and early 2011 will look so dismal for Barack Obama that Palin decides to jump in. Presuming she does, what are her chances of winning the nomination?

I realize that polls more than two years out from the Iowa caucuses may well be meaningless, but what’s most interesting about the head-to-head matchups between Palin and both Huckabee and Romney is that she is losing to two candidates from very different parts of the GOP coalition. Romney is a very recently converted social conservative who is probably at heart more liberal on social issues than he sold himself in 2008. He’s a northerner-midwesterner from the business wing of the party who is expected to struggle with the hardcore, evangelical conservative base, given his social issue flip-flopping and his Mormonism. Yet Palin trails him because, presumably, he outflanks her to the center-right side of the party. 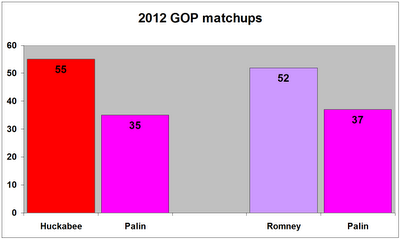 Huckabee? Just the reverse: a southern man of faith with broad appeal to social conservatives who is probably viewed with some wariness by the GOP’s business elements. Yet he also leads her, presumably because he has a stronger appeal among the base than does Palin and thus outflanks her from the right. My point is this: Palin’s ideological appeal is easily dominated because it is wide but not deep on the far right and neither wide nor deep among the party’s institutional and more mainstream elements. Though her chances will increase, perhaps dramatically, if Huckabee opts out–and he very well may, given his rising media presence–it’s unclear to me how she can unify the party. Though neither Huckabee nor Romney displays a strong command of foreign and defense policies, on this potentially tiebreaking count Palin for the moment remains as weak if not weaker than either of them–recent speeches in Hong Kong or not.

Here’s how that squeeze for Palin is described by Rasmussen:

Suggesting that Romney’s Mormon faith may still be a problem among some Christian conservatives, Palin leads him by 14 points – 52% to 38% – among GOP primary voters who describe themselves as Evangelical Christians. But Romney beats Palin by 26 points among other Protestants – 58% to 32% – and holds similar winning margins among Catholic voters and those of other faiths.

On the other hand, Huckabee, an ordained Southern Baptist minister, beats Palin by 17 points among Evangelical Christians and 29 points among other Protestants. A similar spread is evident among Republican voters of other faiths, but Huckabee has just an eight-point edge over Palin among Catholic voters.

Rasmussen notes that Palin’s numbers have dropped significantly since polls taken in July prior to her announcing that she would resign the Alaska governorship. And that brings me to the first decision she must make, whether to run or not. I think she won’t.

First, some candidates who run and lose still gain because they emerge as national figures. But Palin already achieved that status in 2008; her marketability is secure, especially given that she presently has a book that rose to the top of the Amazon rankings before it was even available for (non-advance) purchase. (As of this writing it ranks #2.) Palin’s star burns bright enough that only a successful bid for the nomination would brighten it, while a failed bid might diminish it. Few failed vice presidential candidates have won so much from a loss as she did last year.

Second, there is the matter of her resignation. I recognize that this may have been done to avoid a potential scandal and even indictment. But if you want to run for president you run for re-election in 2010 and then, and only then, maybe resign the governorship in order to make an unencumbered bid for the White House. The resignation signals her desire, confirmed by the self-interested and possibly unreliable father of her grandson, to cash in now rather than invest in her long-term electoral future. After all, Palin could have reaped the book royalties and still governed Alaska. But she bolted anyway.

In short, the opportunity costs of running seem to me higher for her than not running. Palin has near-universal name recognition, a book that will bring her significant income, and maybe a chance to become a television personality who could some day serve as the Right’s answer to Oprah Winfrey. Though the latter may be a bad move for her in the short term, I wouldn’t be surprised to see her make a future bid for TV stardom. (Update: When I first posted this, I had not yet seen this item about Palin’s scheduled appearance on Oprah’s show.)

That reality, coupled with the prospects of, first, an unclear route to the nomination and, second, an equally uncertain path to the White House even if she is nominated, provides Sarah Palin ample disincentive to run at all. Methinks she will play stay-at-home hockey mom in 2012.

*Corrected typo in which I wrote “seven”. The data is correct, though: 10 post-war races with incumbents running, seven of whom won.