Sarah Palin, the former Alaska governor, is among the more natural populist politicians of our time, frequently critiquing elites in the press, the Democratic Party, and the Republican establishment. It is one of the reasons — along with her working-class background and the sense of authenticity that she can often convey — that she is so popular with some voters.

One potential problem for Ms. Palin, however, is that plenty of well-to-do and well-educated voters — those whom we might think of as belonging to the elite — will be participating in the Republican primaries.

Three recent surveys of Republican primary voters suggest significant divides in support for Ms. Palin based on the educational attainment of the voter. A poll released this morning by Marist College show Ms. Palin as the first choice of 17 percent of Republicans who have not graduated from college, giving her a slight lead among that group. But her support is just 7 percent among Republican college graduates, which placed her fifth behind Mitt Romney, Mike Huckabee, Newt Gingrich and Chris Christie.

The candidate whose numbers move in an opposite direction from Ms. Palin is Mitt Romney. On average over the three surveys, he had the support of 15 percent of “no college” voters, but 25 percent of Republicans with higher levels of educational attainment. (Averages for each of the Republican contenders are contained in the graphic below.) 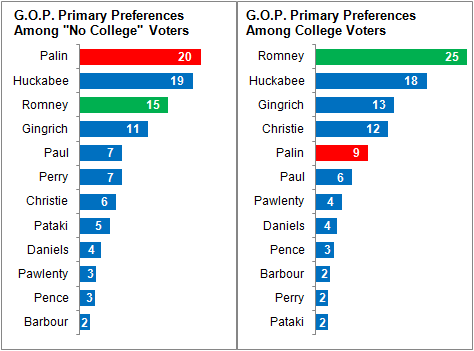 It is possible that some of these differences have to do with socioeconomic status, instead of or in addition to educational attainment. (The two variables are strongly correlated and hard to disentangle from summary-level data.) The Marist poll, for instance, found Ms. Palin with the support of 20 percent of Republicans whose households make $50,000 or less per year, versus 10 percent of those making $50,000 or more, while the CNN poll also found Ms. Palin performing about twice as well among lower-income voters than higher-income ones.

A candidate, of course, does not need to lead among all demographic groups in order to win the primary: Barack Obama defeated Hillary Clinton in 2008 despite trailing her among many key groups, like whites, women, and no-college voters. And if Ms. Palin’s numbers some demonstrate weakness among higher-attaining Republicans, her support among those with lower socioeconomic status is also a strength.

Nevertheless, all else being equal, a candidate would usually prefer to do better among higher-status voters, because they vote more reliably in Presidential primaries. According to exit polls in 2008, for instance, the fraction of Republican primary voters who make at least $50,000 per year was 75 percent in New Hampshire, 74 percent in Nevada and Texas, 72 percent in California and South Carolina, and 71 percent in Florida. It was somewhat lower, between 62 and 68 percent, in three key Midwestern states — Iowa, Michigan and Ohio — in which Ms. Palin will probably have to perform well to have a realistic shot at winning the nomination.