The Obama campaign’s response to John McCain’s selection of Sarah Palin as his 2008 running mate was to argue that the Arizona senator had ruined his narrative of being the seasoned, experienced candidate by coupling himself with an unseasoned novice. An online article in Religion Dispatches written this week by Robert Jones and Daniel Cox confirms the Obama camp’s assertion that McCain ruined his story, but suggests that it had less to do with the Arizona senator’s experiential claims than his ability to present himself as a non-polarizing, post-partisan politician. 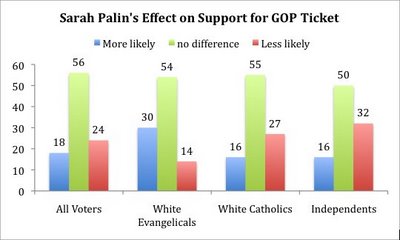 Using numbers from a post-election poll, Jones and Cox conclude that Palin damaged McCain’s brand because her style evoked the kind of polarizing politics that Americans had grown sick of–and to which, not coincidentally, Barack Obama offered himself as an antidote.

Noting that her selection only had a net positive effect on support for the Republican ticket among white evangelicals, with a net negative effect among white Catholics and Independents (as depicted above), Jones and Cox ask:

So what explains the large gap for many between identifying with Palin’s values and supporting her as a candidate? Part of the explanation certainly has to be her many now-famous stumbles, public gaffes, and lack of knowledge about key policies. But there is another important explanation. There is mounting evidence that the American electorate is turning away from so-called “values voter” wedge politics that Palin represented (recall that Palin launched her career by using an anti-abortion rights hit piece against her opponent in the Wasilla mayoral race, an historically non-partisan position).

In our post-election survey, an overwhelming majority (73%) of American voters agreed that “people of faith should advocate for policies that protect the interests of all and promote the common good” compared to only 22% who preferred pursuing “policies that protect their values and way of life.” By a nearly 2-to-1 margin, those favoring a common good politics said Palin’s addition made them less likely to support the GOP ticket (27% less likely vs. 15% more likely).

One might quibble with these results on (at least) two grounds. First, the poll was taken after the election McCain-Palin had just lost, so it’s possible that respondents overstated their negative views of her. The second thing that’s hard to ignore is the fact that at least half the voters overall, and within each subgroup, say Palin made no difference to their decision. In short, she either didn’t matter, or if she did Palin evoked a polarizing sentiment that, on balance, hurt McCain more than it helped him.

“The avalanche of coverage since Palin’s resignation indicates that pundits are likely to continue their conjectures about Palin’s motives and political future,” write Jones and Cox. “But the numbers reveal her limitations as a national political figure, and her serious liabilities among virtually every religious and demographic group outside of the GOP base. Moreover, the numbers reveal that voters across the political spectrum are looking not only for candidates who share their values, but for candidates who can ably serve the common good.”

As I said yesterday, whatever her plans, I think Palin’s ambitions in presidential politics were significantly if not irrevocably damaged by the sudden announcement of her resignation. Her type of politics may sell in Alaska–though Jones and Cox note that Palin’s approval numbers have plummeted at home, too–but she just doesn’t sell nationally. She’s not merely fighting the last war, but the last generation’s war. And that generation and today’s generation have largely grown tired of fighting.

But Palin will continue to serve as an icon for those still fighting those wars. Which is why I’m betting she will end up as a television or radio personality, a position ideally suited to her style of politics and her specific appeal to a small and shrinking, yet rabid and animated segment of the American public. Palin may not have a lot of governing experience, but she does have enough experience (and appetite) as a national polarizing agent, a role that seems to come to her naturally. Once Palin gets out of Alaska, does her book tour and, presumably, abandons her presidential ambitions–or even if she runs and fails miserably in 2012–she will be free to make the transformation into her truer, more natural political self.