he more than 425,000 Palestinian refugees living in Lebanon, who yesterday received a qualified right to work in the country, have a long and complicated history in the country. Unlike those in their neighbors Jordan or Syria, Palestinians in Lebanon have never obtained significant political or social rights, such as citizenship, rights to work, or the ability to own property. 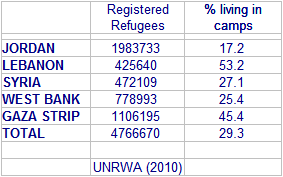 While he bill passed by the Lebanese Parliament formalizes the legal status of Palestinian workers in a number of lower tier occupations, the larger issues of nationality, land and property, and access to Lebanese public social benefits and higher level professions remain unresolved.
Somewhat ironically, the leadership of the many politico-religious communities in Lebanon are in largely in harmony on one element this issue: everyone agrees that the registered Palestinians refugees in Lebanon should not be given Lebanese nationality, nor the trappings of permanent residence, such as the right to own land or major property. It is for very different reasons, however.
When the Palestinians were initially forced from their land by the Israelis during and just after the 1948 war, about 126,000* of the 726,000 total refugees ended up in Lebanon, representing a little over 17 percent. Throughout the next decade, most Christian Palestinians, about 50,000 in total, received Lebanese citizenship. Following the conclusion of Lebanese Civil War in 1990, another group of Palestinians, almost all Shiites, along with a few remaining Christians, received Lebanese nationality, numbering about 60,000. This in concession to the vastly improved political position of the Shiites following the Taif Agreement, which changed the confessional distribution of power in the country.
The more than 400,000 refugees that remain today in Lebanon, in 12 official camps, among other places, are almost entirely Sunni Muslims, their Lebanese brethren being the confessional group that lost the most political power in the wake of the 1975-1990 civil war.
Polling numbers from 2007 shows a remarkable level of agreement about the Lebanese confessionals that an improvement in civil and political rights for the Palestinians, without full citizenship, is the appropriate way forward. That said, there is a definite split between the Christian and Muslim communities, with a significantly larger Muslim minority in favor of citizenship, as well as more vigorous support for improved civil and social rights. 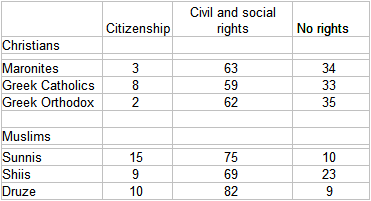 Accordingly, it’s unlikely in the foreseeable future that the Sunni Muslim Palestinians in Lebanon will gain citizenship, as they have in Jordon, or full civil rights and semi-nationality, as they have in Syria, in the years ahead. Across confessional groups, there is strong support for the right of return for the refugees to areas that is now part of the Israeli state — among Christians to avoid upsetting the gentle confessional balance against them, while for Muslim Lebanese it is for reasons of Muslim/Arab solidarity. Giving nationality or full residential rights to the Palestinians, they argue, would admit defeat in this effort, regardless of how fruitless it may seem.

From the outside, of course, it looks far more like political expediency: excluding an unwanted and marginalized community from the benefits that the majority enjoy, regardless of the rhetoric that underpins it.

—
Renard Sexton is FiveThirtyEight’s international affairs columnist. He can be contacted at sexton538@gmail.com