Thirty days in the hospital. And when she reappears, she’s wearing glasses that are only for people who have traumatic brain injury? We need to know what’s up with that.

That’s what Karl Rove, the Republican strategist and pundit, said about Hillary Clinton, at least according to a report a little more than a week ago by the New York Post.

The reported remarks prompted outrage from Clinton’s spokespersons and Clinton’s husband and newspaper editorial pages and several of Rove’s fellow Republicans. Rebukes rolled in from fact-checking sites, pointing out that while Clinton had a concussion in 2012, Rove misstated the number of days she spent in the hospital, and that whether a concussion is a “traumatic brain injury” is open to debate.

But the comments drew a lot of press coverage, and they will probably get a more now that former Alaska governor Sarah Palin has come to Rove’s defense. Peter Beinart, writing for The Atlantic last week, likened Rove’s comments to a “dirty trick”:

Why does Rove allegedly smear his opponents this way? Because it works. Consider the Clinton “brain damage” story. Right now, the press is slamming Rove for his vicious, outlandish comments. But they’re also talking about Clinton’s health problems as secretary of state, disrupting the story she wants to tell about her time in Foggy Bottom in her forthcoming memoir.

I ran a search on Lexis-Nexis’s database of news articles, counting the number of citations each day that referred to Clinton’s health. The search string is a little complicated in an effort to minimize the number of false negatives and false positives. I required that the citation use Clinton’s full name (Hillary Clinton or Hillary Rodham Clinton). I also required that it used her last name, Clinton, within 30 words of one of the following terms: health, healthy, injury, injured, brain or concussion. I omitted citations where health was the only one of these terms used and was mentioned within five words of the terms care, reform or insurance, which may refer to U.S. health care policy rather than Clinton’s personal health.

This search shows an eightfold increase in news articles that mention Clinton’s health since Rove’s remarks, from an average of 16 hits per day in the two weeks before his remarks to 130 per day since then. 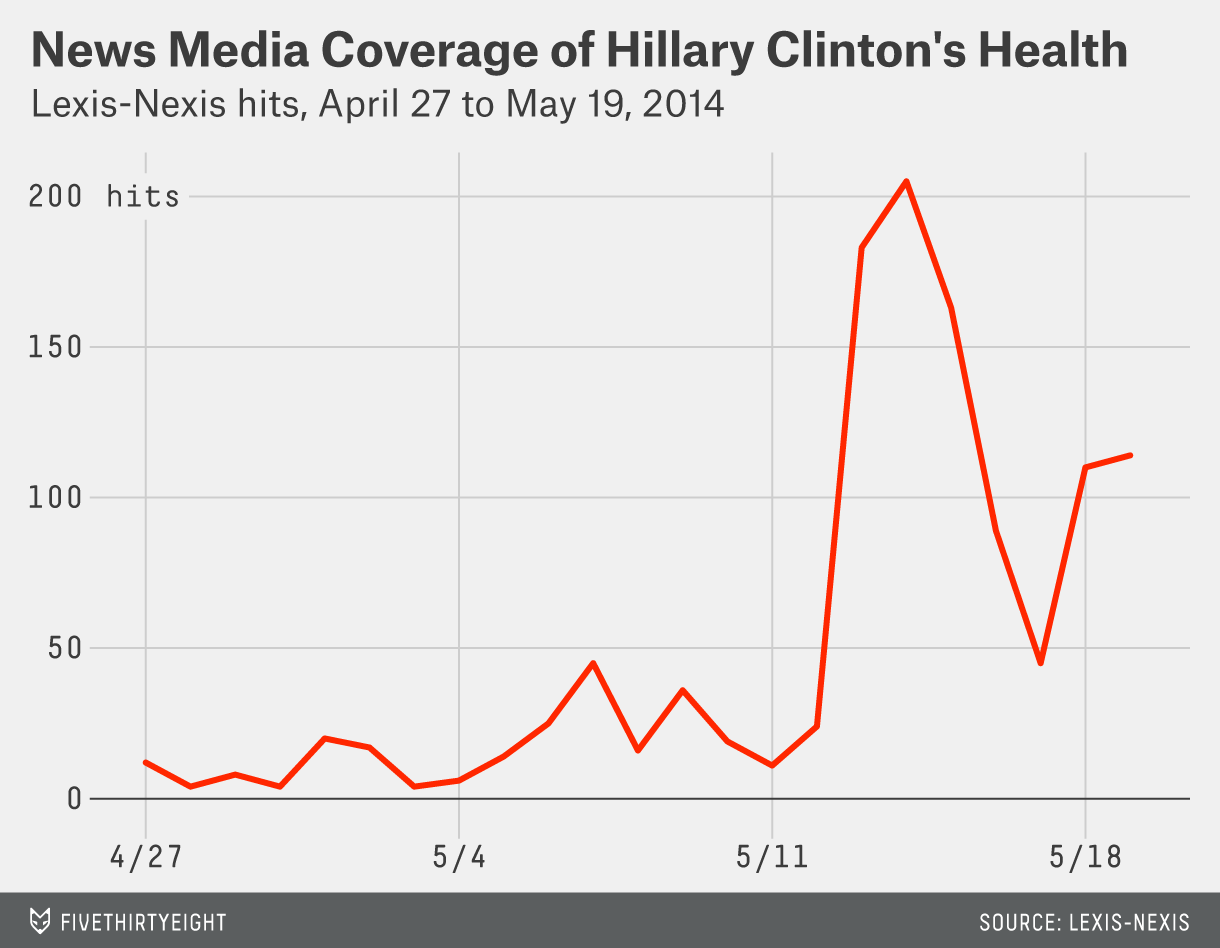 It appears that Beinert is right. But I’d add one caveat: Many of these articles — like this one — are referring to the media controversy over Rove’s remarks rather than providing substantive reporting about Clinton’s health. We can check this by omitting articles that would otherwise qualify but that also mention Rove. 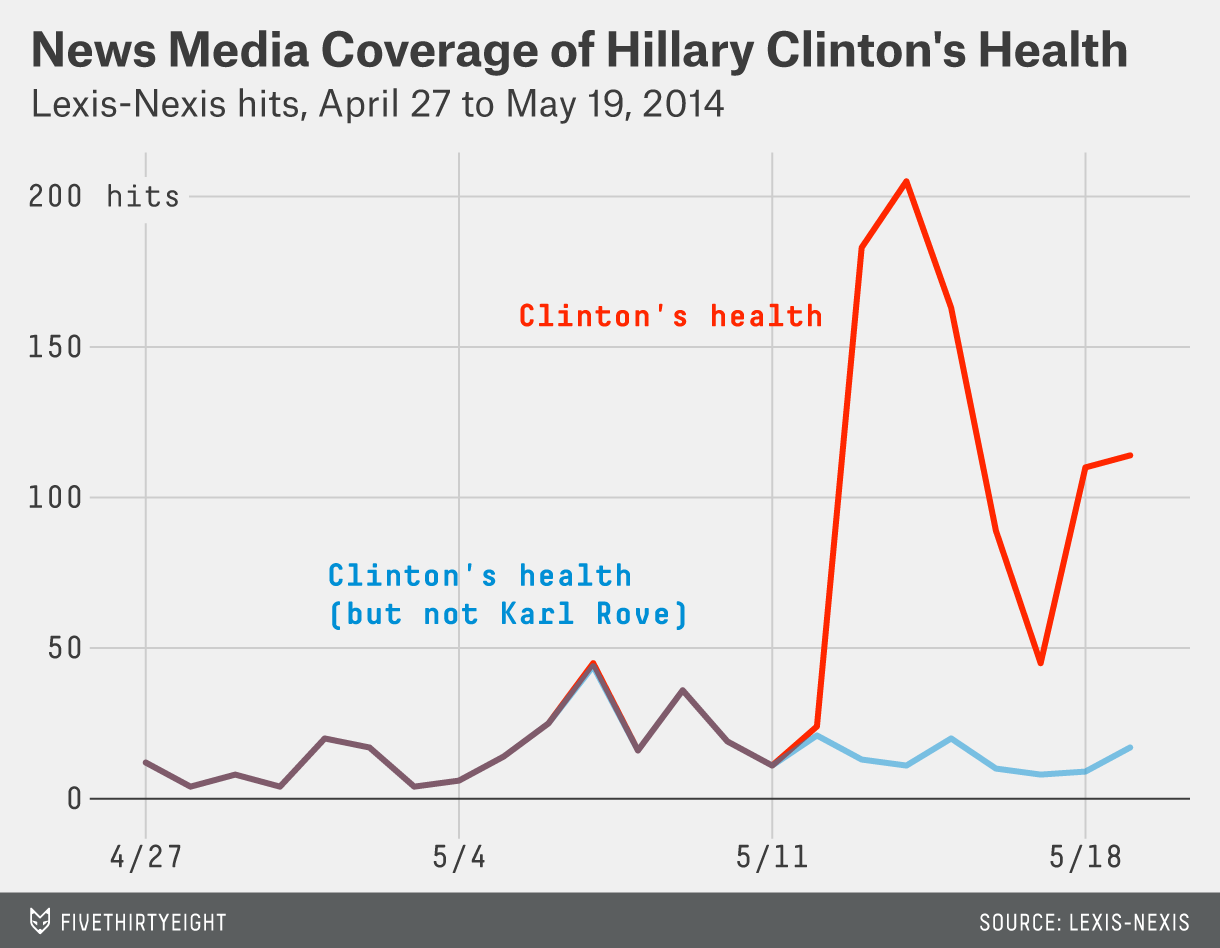 Articles that mention Clinton’s health but not Rove haven’t become any more common. There were 16 of those per day before Rove’s comments, and there have been 13 per day since then. It’s possible that some of the articles are deeper looks into Clinton’s health that mention Rove only in passing, but after perusing them, I doubt that more than a handful would belong in that category.

If Rove’s goal were to gain a lot of attention for himself while simultaneously upping the number of passing references to Clinton’s health, he’s succeeded. If Rove’s goal were to jump start a deep, substantive discussion of Clinton’s health, it’s less clear. (As an aside, it may also be that Rove’s remarks had no strategic purpose. I’ve spoken at enough public events to know that a lot of words are expected from you, including some that later you might regret having said.)