Former Vice President Joe Biden has gotten a lot of good news over the past few days. A huge, almost 30-point win in South Carolina. A series of impressive endorsements. Other candidates in the moderate lane — namely, former South Bend, Indiana, Mayor Pete Buttigieg and Sen. Amy Klobuchar, who were among those endorsers — dropping out.

But one thing we haven’t had a lot of since South Carolina was hard data. That changed late last night with a flurry of new polls — we now have at least two polls conducted since South Carolina in every single Super Tuesday state. So by the time we froze the FiveThirtyEight forecast at 9:30 a.m. on Tuesday,1 the Super Tuesday picture was a lot clearer — and overall, things look good for Biden.

Biden is now about twice as likely as Sanders to win a plurality of pledged delegates, according to our primary model, which gives him a 65 percent chance of doing so compared with a 34 percent chance for Sanders. This represents the culmination of a trend that has been underway in the model for about a week; it started to shift toward Biden once polls showed the potential for him to win big in South Carolina — and it anticipated a polling bounce in the Super Tuesday states if he did win big there. Still, even after South Carolina, Biden’s plurality chances had risen only to 32 percent, compared with 64 percent for Sanders. That means the polling bounce from the events of the past few days has been bigger than the model anticipated.

To be clear, however, there is still a lot of uncertainty. We’ve been talking about delegate pluralities, which obscures the fact that the most likely outcome in the model is still that no one wins a majority of pledged delegates. And we should note that the lack of a majority does not necessarily imply a contested convention. For instance, if Biden enters the convention with 46 percent of delegates and former New York Mayor Michael Bloomberg with 10 percent, they could strike a deal where Bloomberg delegates vote for Biden on the first ballot.

Still, in the overnight polling, the numbers for Bloomberg — and to a slightly lesser extent, Sen. Elizabeth Warren — held up better than you might have expected. The model has Bloomberg projected to finish with at least 15 percent of the vote in most states, which is the threshold required to receive delegates allocated at the state and district levels — and it has Warren projected to do so in most states outside of the South. While to our eye, the model’s numbers look a little optimistic for Bloomberg, the whole point of a model is to rely on objective data. And that says Bloomberg could still accumulate plenty of delegates, even though he isn’t a favorite in any state. Keep in mind that both Bloomberg and Warren also benefit from Buttigieg and Klobuchar dropping out — it’s easier to get 15 percent in a four-way race than a six-way one.2 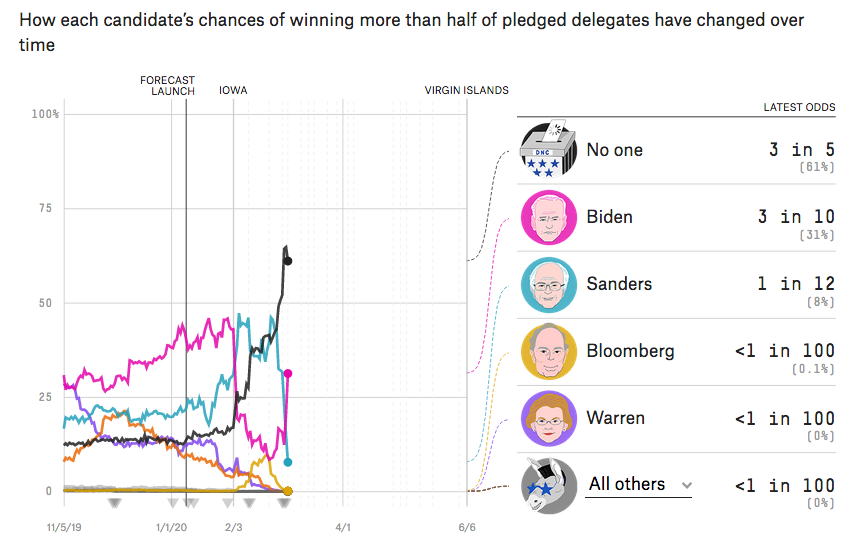 In delegate terms, Biden is projected to finish about 375 delegates ahead of Sanders in the average simulation — but keep in mind that the average obscures a huge amount of variation. Still, this provides for a helpful benchmark. Bloomberg is projected to finish with an average of 555 delegates and Warren with 283 delegates — so their combined delegate tally projects to be more than twice as large as the projected margin separating Biden and Sanders. That’s why the model tends to land on “no majority” outcomes. If Bloomberg, Warren and other candidates are keeping 15 or 20 percent of the overall pledged delegate haul for themselves, then either Sanders or Biden needs to beat the other one by quite a bit to get an overall majority. 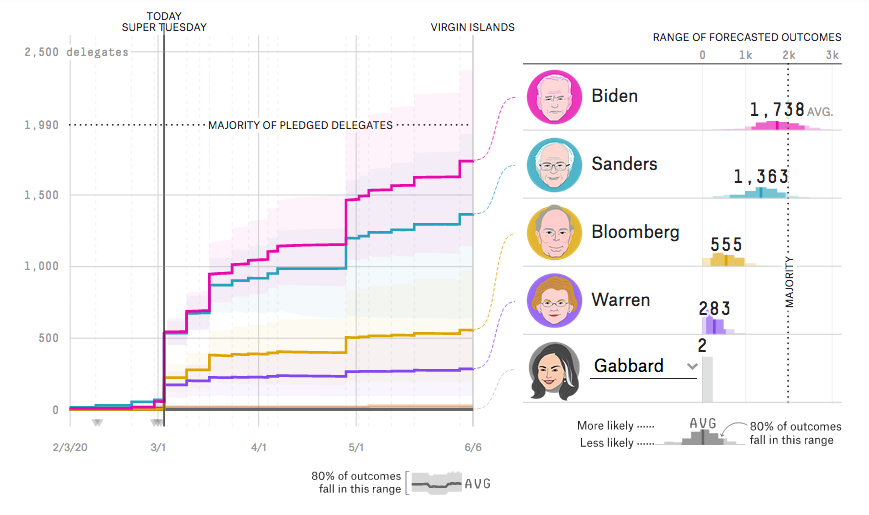 Below are our final forecasts for the 15 states and territories that will finish voting today. As you can see, Biden is favored to win in the seven Southern states, although he is anywhere from a very slight front-runner in Texas to a solid favorite in Virginia. And Sanders is favored in the seven remaining states across the Northeast, Midwest and West; his lead is most tenuous in Massachusetts and safest in Vermont. The model isn’t really sure what’s going to happen in American Samoa, where it gives Biden, Sanders and Bloomberg all decent chances.

Why this sudden turn in Biden’s favor? As we said, it’s mostly about the polling showing an even bigger bounce for Biden than the model expected. On Monday night and Tuesday morning, we got our first glimpse of polls in which a significant number of interviews were conducted after Buttigieg’s and Klobuchar’s withdrawals from the race, and several were startlingly good for Biden. For instance, we got four polls3 in rapid succession of Virginia, a state that had looked like a tossup before South Carolina — and all four gave Biden a lead of at least 14 points. He is now virtually certain to win the state as a result. In the same way, North Carolina is now firmly in Biden’s camp with the release of three new polls4 that gave Biden an average lead of 16 points in the Tar Heel State.

Biden had already been gaining ground in our California polling average, but new Swayable and Data for Progress polls caused Biden to improve further in our forecast for the state. Although Sanders still has a lead there and is the likely winner, Biden has cut his projected margin to the single digits — and both Bloomberg and Warren project to get at least 15 percent of the vote in California, meaning they’ll get delegates of their own and prevent Sanders from running up the score. On the flip side, if Sanders overperforms in California and keeps Warren and Bloomberg from getting 15 percent there, he has some upside relative to our projections.

Granted, other new polls showed less dramatic movement. Swayable and Data for Progress released polls of Texas confirming what our forecast already thought: that Sanders and Biden are neck and neck in the Lone Star State, in what is probably the most interesting contest of the evening. Other polls featured results that looked a little flukish, like Bloomberg leading in Maine and Utah, per two Swayable polls. (This still hurt Sanders’s chances, though, especially in Utah, which was previously expected to be an easy win for him.) But few new polls (outside those of his home state of Vermont) were unambiguously good for Sanders.

We should keep in mind that none of these new polls are traditional, live-caller telephone polls; there just wouldn’t have been enough time to conduct many of them anyway after South Carolina. So that increases the uncertainty — although our model accounts for a lot of uncertainty. For example, in California, we think Sanders could get anywhere from 26 to 39 percent of the vote, while Biden could get anywhere from 21 percent to 32 percent. And those are merely 80-percent confidence intervals; vote shares will fall outside of those ranges 20 percent of the time.

But Biden sure seems to have a lot of upside in today’s contests, especially when you consider that even the polls above aren’t even pricing in the full impact of the last 72 hours. Most of them still included Buttigieg and Klobuchar as options, even though some respondents answered them knowing that they had dropped out. Perhaps Biden’s rally in Texas last night and endorsement from former Texas Rep. Beto O’Rourke could help him there; that’s also too recent to be reflected in any of the polling.

On the other hand, millions of early votes have already been cast by mail-in states like California and Colorado, where Sanders has been (and remains) strong. When watching the results tonight, you should be careful; early ballots are counted first in some states (though not all) and they may not match election-night returns. Early voters can also skew older than younger ones, which can be a disadvantage for candidates such as Sanders who rely on young voters.

And in terms of delegates, it’s possible for either Biden or Sanders to walk away from Super Tuesday with a big lead. Our model thinks Biden could get as many as 639 delegates or as few as 341, and Sanders could get as few as 325 or as many as 608. We’ll only know after all today’s votes have been counted — which, thanks to those mail-in ballots in the West, could take several days.