This chart should tell you pretty much everything you need to know about the rise and fall of Herman Cain: 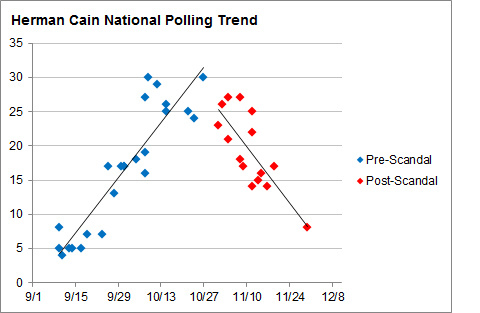 Mr. Cain’s polls were headed on a sharp upward trajectory until Oct. 31, when Politico first reported on accusations that he had sexually harassed two women. They then reversed course and embarked upon an equally sharp downward trajectory. Not a whole lot more complicated than that.

The reason this is worth mentioning is that some of the post-mortems on Mr. Cain’s candidacy have tried to draw much broader lessons from it — for instance, about the electoral prospects for an outsider with relatively little political experience in an era of months-long, multi-million dollar campaigns. These story lines are certainly worth discussing. So is the question of how well a candidate can do when he lacks support from the party establishment. It is possible — I would say somewhat likely — that Mr. Cain’s polls were liable to decline even in the absence of the scandal.

The problem is that the scandal intervened, Mr. Cain’s polling took a 180-degree turn, and that makes coming to any conclusions about these interesting questions extremely dubious. Some of the write-ups about Mr. Cain’s campaign have only mentioned the allegations of sexual harassment and infidelity in passing, which is a bit like asking “other than that, Mrs. Lincoln, how was the play?”

It’s true that a candidate who has not run a high-profile race before is more likely to have vetting problems. It’s also true that Mr. Cain’s handling of the allegations was not very strong. At the same time, it’s hard to imagine that any candidate could have survived the accusations in today’s media environment, given that they came from multiple and distinct sources and that they raised questions not just about Mr. Cain’s personal life but also his performance on the job. If it had been revealed that Mitt Romney had settled multiple sexual harassment cases while he was C.E.O. of Bain Capital, and two additional women made on-the-record comments about other unsettled cases, and on top of that, Mr. Romney had also been accused of marital infidelity, what kind of shape would his campaign be in today? I’d think it would probably have ended, or otherwise would be in a very desperate position.

Surviving one fresh allegation of infidelity is sometimes (but not always) possible, as Bill Clinton showed us in 1992. But almost no P.R. strategy will be robust when something new bubbles to the surface every few days and seems to establish a clear pattern of behavior.