Yesterday, I presented a case that late deciders in Pennsylvania might be more inclined to break toward Hillary Clinton. This conclusion, indeed, seems to have become something of the conventional wisdom.

However, if we remove things from the context of Pennsylvania, it would be a mistake to conclude that Clinton has some inherent and inevitable advantage with late-deciding voters. Let’s do what we always do here, which is to look at the numbers.

Below is a breakdown of support by the timing of voters’ decisions in the 29 states that have voted so far in which exit polls are available. I have excluded Florida and Michigan because of the absence of a normal campaign in those states.

Rather than take a simple look at the margins among late deciders, I have instead looked at what we are really interested in: how much these voters affect the final outcome in a state. For example, in New Jersey, Clinton won among voters who decided on the day of the election by a relatively decisive 13-point margin (53-40). However, only 14% of the electorate decided on the day of the election. So what we do is multiply 14% by 13%, which equals 1.8%. This is how much Clinton gained in her overall margin in New Jersey based on voters deciding on the last day. 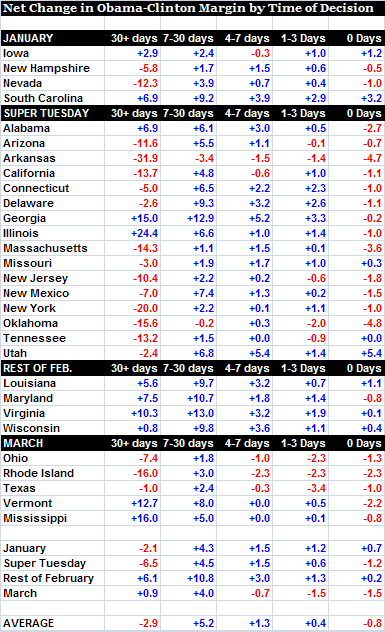 Indeed, Clinton has won among voters deciding on the day of the election in 21 of 29 states (the two candidates tied among this group in Tennessee). However, in most cases, the effect on the overall election results is fairly trivial. In only three states — Massachusetts, Arkansas and Oklahoma — did Clinton pick up a net of 3 points or more based on voters who decided on the last day (Obama, for that matter, beat that 3-point threshold in two states of his own, South Carolina and Utah). On average, her net gain on Election Day has been just 0.8 points.

Also, the preferences of late-deciding voters have been different at different points in the election. Obama actually won — barely — among voters deciding on Election Day in the January contests, as well as in the “Rest of February” states. Clinton won this group on Super Tuesday and on March 4.

The more noticeable difference is what happened in the 1-7 day period. Up until Ohio and Texas, Obama had gained an average of 2.6 points during that period. During the March 4 primaries, however, he lost 2.8 points during this time frame. That’s a net swing of 5.4 points. If Obama had those points in his pocket, he would have won Texas, and barely lost Ohio.

So far, however, Obama does not appear to be losing this 1-7 day news cycle in Pennsylvania. Of the four polls that have released extremely recent data, Rasmussen shows a slight tightening; ARG also shows a tightening, although from a margin that looked like an outlier before; Zogby‘s results have been all over the board — by the way, what in the hell are they doing releasing Sunday’s results at 5 PM, without having conducted interviews on Sunday evening? — and Mason Dixon shows a tight race, although has no trendlines to look at.

Obviously, we’re going to be able to sort out how everything played out in Pennsylvania soon enough. But the claim that Clinton has some large, intrinsic advantage among late-deciding voters is not really supported by the evidence.

EDIT: Data excluded Arkansas before and has been fixed.