10:53 PM. Four out of six with Slumdog‘s thoroughly unsurprising victory. Meh. That would be pretty impressive, if only a blindfolded monkey couldn’t have done better. But I think Penn’s win in the Best Actor category was genuinely surprising.

10:35 PM. For the 10th 11th time in her career, Meryl Streep makes the scrunchy face while someone else wins Best Actress.

10:21 PM. With Danny Boyle’s win for Slumdog, the computer is now assured of getting at least 2 out of the 6 awards right: better than random chance! Take that, Kaus!

9:54 PM. Whomever of you out there who had a drinking came category for “Zac Efron eye blinks” ain’t making it into work tomorrow.

8:58 PM. These horrid montage sequences always remind me of this:

8:52 PM. To see an example of what I was talking about before, compare the performance of Lord of the Rings: Return of the King, which made just $12.9 million in additional domestic box office after winning the Oscar in 2004, against Million Dollar Baby, which got a $35.6 million bounce.

8:44 PM. Dark Knight, indeed, has now made more than $1 billion worldwide, making it one of only four films ever to do so.

8:28 PM. Discuss: the reason why Dark Knight and WALL-E weren’t nominated for Best Picture is because everyone who was going to see them has already seen them anyway.

8:00 PM. Remember when the Oscars used to be interesting and the Super Bowl used to be boring?

7:38 PM. Of course, there actually are polls on this stuff. Edison Research, which is the group best known for conducting the national exit polls each election, surveyed 915 movie-goers who actually saw all five best picture nominees (which is roughly four more than I’ve seen). Slumdog Millionaire was the plurality choice with 45 percent, with Milk next at 26.

7:33 PM. Here is a rundown of my computer-generated picks against the wisdom of crowds over at Intrade.

You feeling lucky tonight, Taraji P. Henson? I need a miracle to prevent Mickey Kaus from making fun of me. 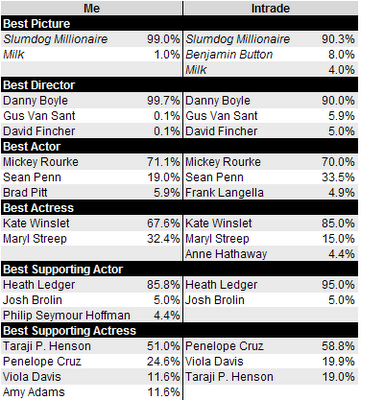