Nate is going to be writing a post at some point about the risks facing Republicans for their general tendency toward nay-voting and, in particular, their opposition to healthcare reform. The Democrats have been peddling hard a “Party of No” narrative–I get what seems like an email a day from the Democratic National Committee with some update or twist on this theme–though I have no idea whether this meme about the GOP is resonating or not with the broader public.

In any case, I think it is actually wise–as a general rule, and specifically to healthcare–for the GOP to vote against reform. Mind you, this has nothing to do with my opinions about the bill or its significance; I’m speaking here solely about political calculus. To demonstrate my point, consider the opposition party’s situation as a simple game with two possibilities for the quality of legislation the majority passes–a generally “popular” bill or a generally “unpopular” one–and two options for how minority party members can vote on those bills, either voting with the majority or against. Presumably, legislators have some notion of how popular the legislation will be, but their information is incomplete.

In the first scenario, let’s assume that will be a small penalty to pay by minority party caucus members for having voted against a popular bill passed by the majority (-1), and some reward for voting along with the majority for it (+1). To be clear, these are solely the payoffs for voting for good policies and against bad ones–not the political benefits or costs of voting with/against the majority party, which I address in a moment. I presume the size of the payouts, positive or negative, is small because minority party members gain/lose more by virtue of being in control, whereas minority members (especially in the House) wield little control beyond their votes at roll call. This is what the “freedom” of being an opposition party means–the risks and rewards of actions taken are smaller.

Meanwhile, the other component of that freedom is the license it gives one to oppose–and the concomitant expectation that you will in fact stand in opposition, especially when the majority makes bad decisions. And thus, compared to the cells directly above in the top row, the payoffs in the two cells of the bottom row are, first, far worse for minority legislators who voted along with the majority on an unpopular bill (-5), and second, far greater for them if they voted against an unpopular bill (+5)* 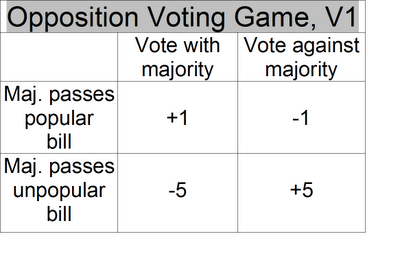 We could argue about just how big the disparity in the 5:1 magnitude of the payouts between top and bottom rows should be, but I don’t think there’s an argument to be made that the top payouts should be larger than the bottom. Surely a minority party legislator who played a unique, key role in shepherding the bill to passage may merit a higher individual payout. But I’m thinking in general terms about a random member of the minority caucus, and it seems reasonable to me to presume that there is generally more for minority members to be won (or lost) by voting against (or for) an unpopular piece of legislation for which the majority will be held responsible than voting for (or against) a popular one. This is an arguable assumption, but one I believe is essentially correct–and much of the analysis to follow stems from it.

But is it really the case that the minority party member receives the full payout in the top-left box for voting with the majority on popular legislation? I would argue they do not. After all, there is some added, perhaps universal value for being a party loyalist and thus opposing the majority–as well as some potential cost for defecting from the minority caucus to provide aid and the ever-important cover of “bi-partisanship” to your majority party opponents.

So let’s say that, regardless of the policy merits or popularity of the bill in question, any defection (voting with the majority) subtracts one point from the payouts, while remaining loyal (voting against the majority) adds one point. In the second scenario, below, that changes the payouts in the top two cells to zero. Because they have the same value, the game “reduces” to a choice based on the bottom two cells, and thus a clearly dominant strategy emerges: vote against the majority. 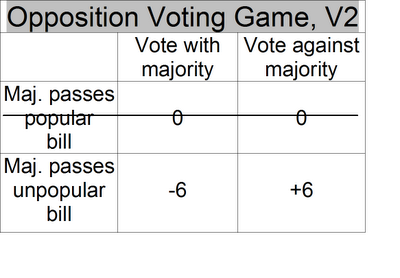 The votes that come to mind when I think about this simplified game are the 1993 budget bill and the October 2002 Iraq War resolution vote. In the former case, Republicans voted uniformly against the Clinton-Gore budget plan, which later came to be regarded as sound and sensible fiscal policy. Republicans won big a year later, and though the “Revolution” of 1994 was the result of other factors, it is difficult to see how the GOP paid any price for voting against sound fiscal policy just a year earlier.

Fast forward nine years to the 2002 Iraq vote, and what happened? Dozens of Democrats in both chambers voted along with Bush and the GOP-controlled Congress to authorize the Iraq invasion. Did John Kerry and others really benefit politically from this vote? Even before public support for the war plummeted, I submit that they did not. And once public support did tank, Republicans pointed out those Democrats to share the blame and provide themselves political cover. That said, it is probably not the case that the added benefit for minority members of voting with the majority on a popular bill is equal in magnitude to the cost of voting with them on an unpopular bill. In other words, in the original matrix the payoff in the left column boxes would probably have to be reduced somewhat even prior to making an adjustment for party disloyalty, yielding something like this: 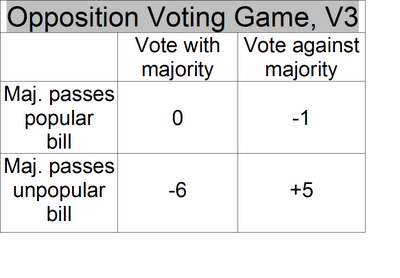 There’s still not a dominant strategy in V3, but without going into the calculus for how often one votes “nay” v. “aye,” suffice to say one mixes in fewer “aye” votes as a result.

I don’t suggest that this game and my hypothetical payouts apply at all times and everywhere. But I do think as a general rule, or at least the default strategy, minority parties should vote unanimously in opposition to majorities. Why? Because if you vote along with them, you get little credit and are used for political cover when things go wrong, making it a break-even/lose situation. And if you vote against you usually pay little to no price if things go well, but stand to reap huge windfalls if things go awry, making that a break-even/win situation.

Applying all of this specifically to the healthcare legislation, there really is no reason for any Republican to vote for it. There are a lot of specific reasons why this is so: the GOP coalition is older and whiter and thus will benefit less; conservative voters reflexively oppose expansions of government of any type; etc. But even if the ideological and demographic reasons are held aside, it makes sense to vote “nay.” Just ask 2004 Democratic presidential nominee John F. Kerry.

*Games typically show payoffs for both row-wise and column-wise players, separated by commas, but here I’m only interested in payouts for the minority legislators (i.e., column-wise players), hence a single entry, or payout, is provided for each cell.