On Sunday, The New York Times pointed out a paradox in American politics: Democrats consistently win among women, yet many states in the Northeast, while being Democratic strongholds and liberal hotbeds, have never elected a female Democratic governor.

The list includes Pennsylvania, New Jersey, New York, Rhode Island and Massachusetts. In three of those states — Pennsylvania, Rhode Island and Massachusetts — Democratic women are running in gubernatorial primaries this year, but the Times said their odds are slim because influential political machines in those states are likely to back male candidates.

The article made me wonder, though: How many states have elected female governors? 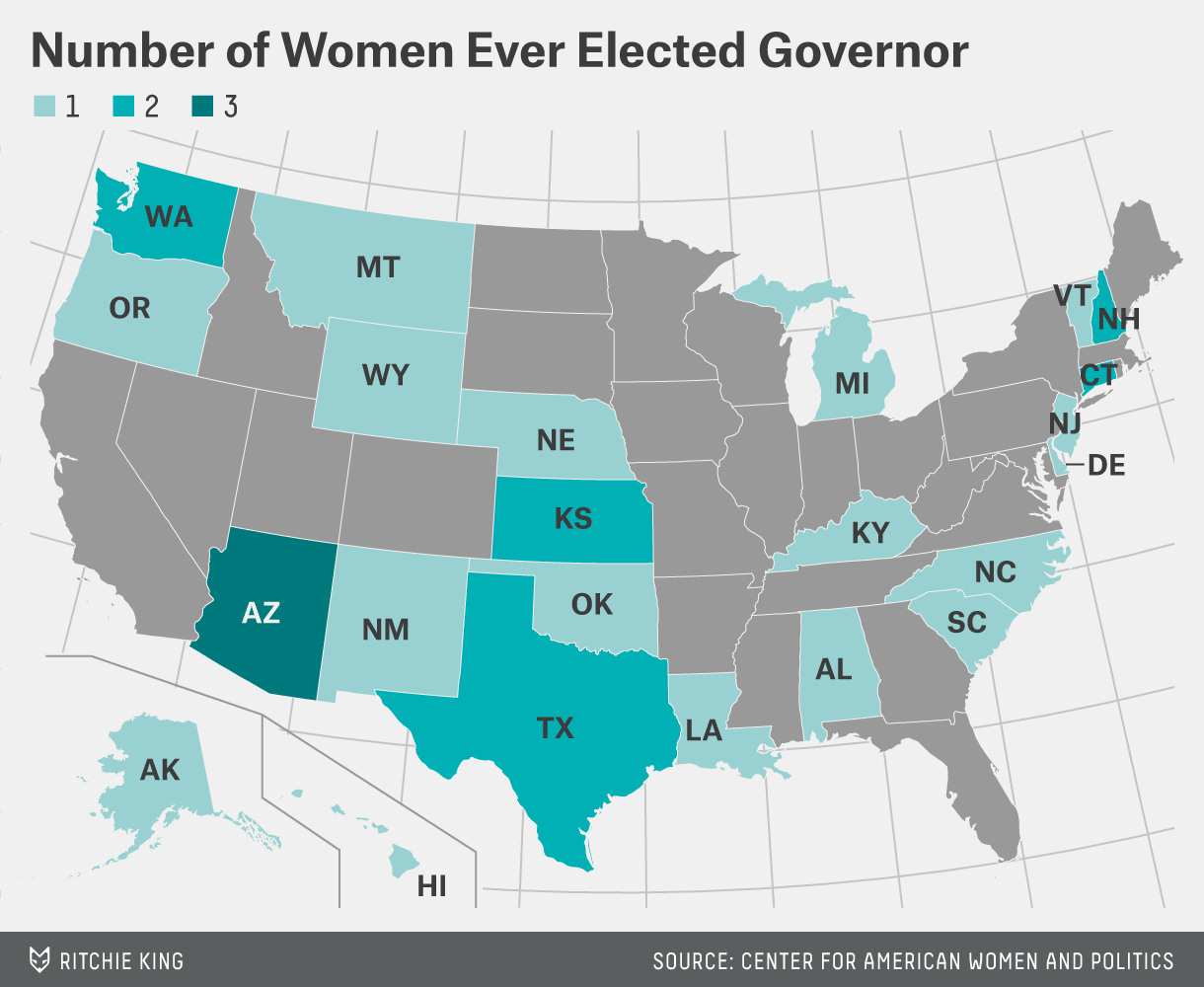 The answer is 23 — fewer than half. Thirty-five women have served as governor in U.S. history, though not all of them were elected to the position. Four became governor through succession, including Olene Walker, a Republican from Utah who was elected lieutenant governor in 1992 then took the helm in 2003 when Mike Leavitt left to head up the Environmental Protection Agency. Walker is not included in the map above, nor are the other three women who were never voted in as governor.

I also did not include Vesta M. Roy, who served as acting governor of New Hampshire for a week, between the death of Hugh Gallen and the inauguration of his successor, John Sununu.

I did include winners of special elections, however. This means Nellie Tayloe Ross, the country’s first female governor, who was chosen in 1925 to replace her recently deceased husband as Wyoming’s chief executive, is on the map. She was the only woman to serve as governor in Wyoming’s history.

How do the 30 women who were elected break down along party lines? Nineteen were or are Democrats and 11 Republicans. 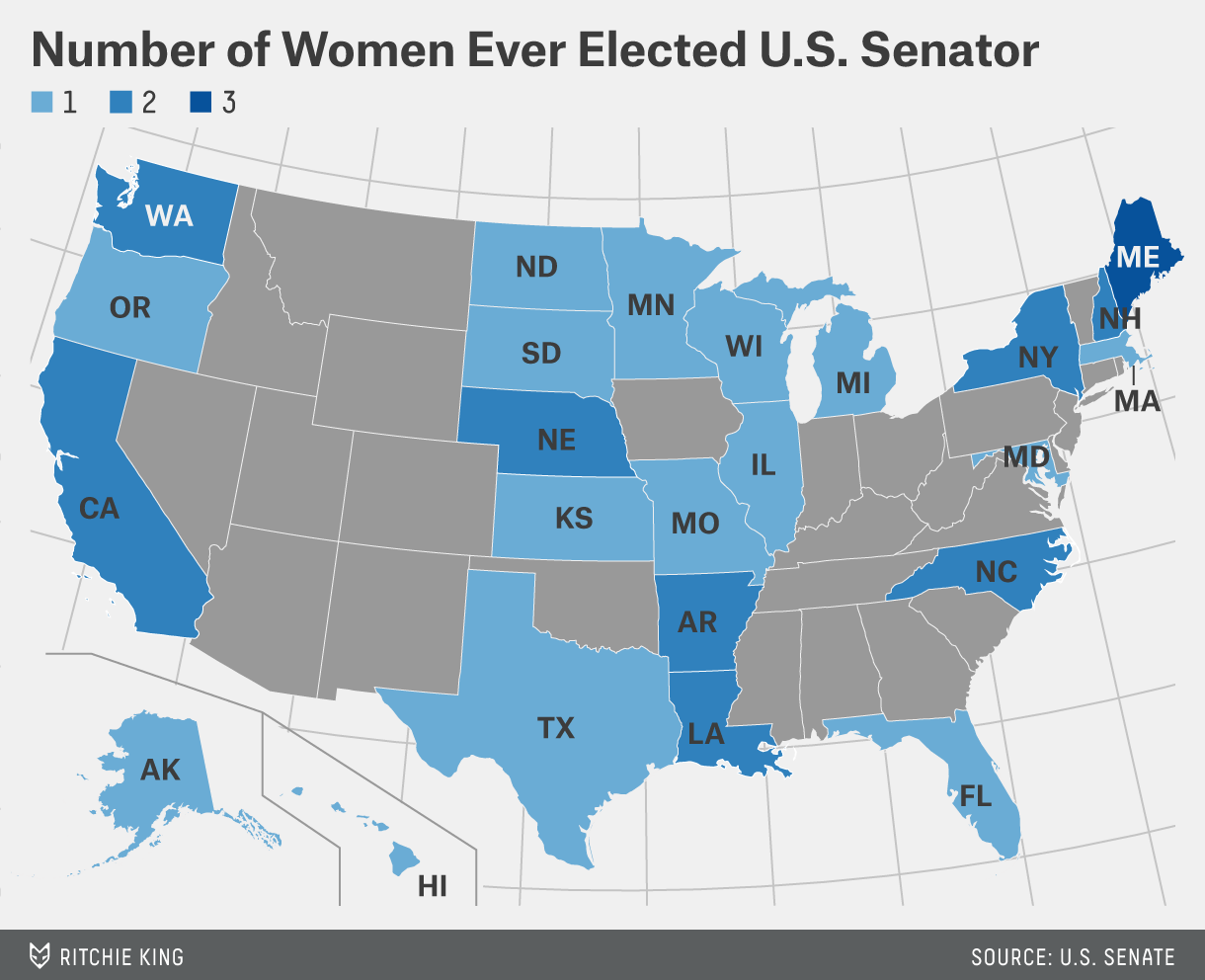 Not much. Twenty-four states have elected a total of 34 female senators. (A total of 44 women have served in the Senate, but 10 were appointed). The party breakdown is similar — 22 Democrats and 12 Republicans.

Let’s combine the maps to see how the states stack up when it comes to electing women to top political positions in general. 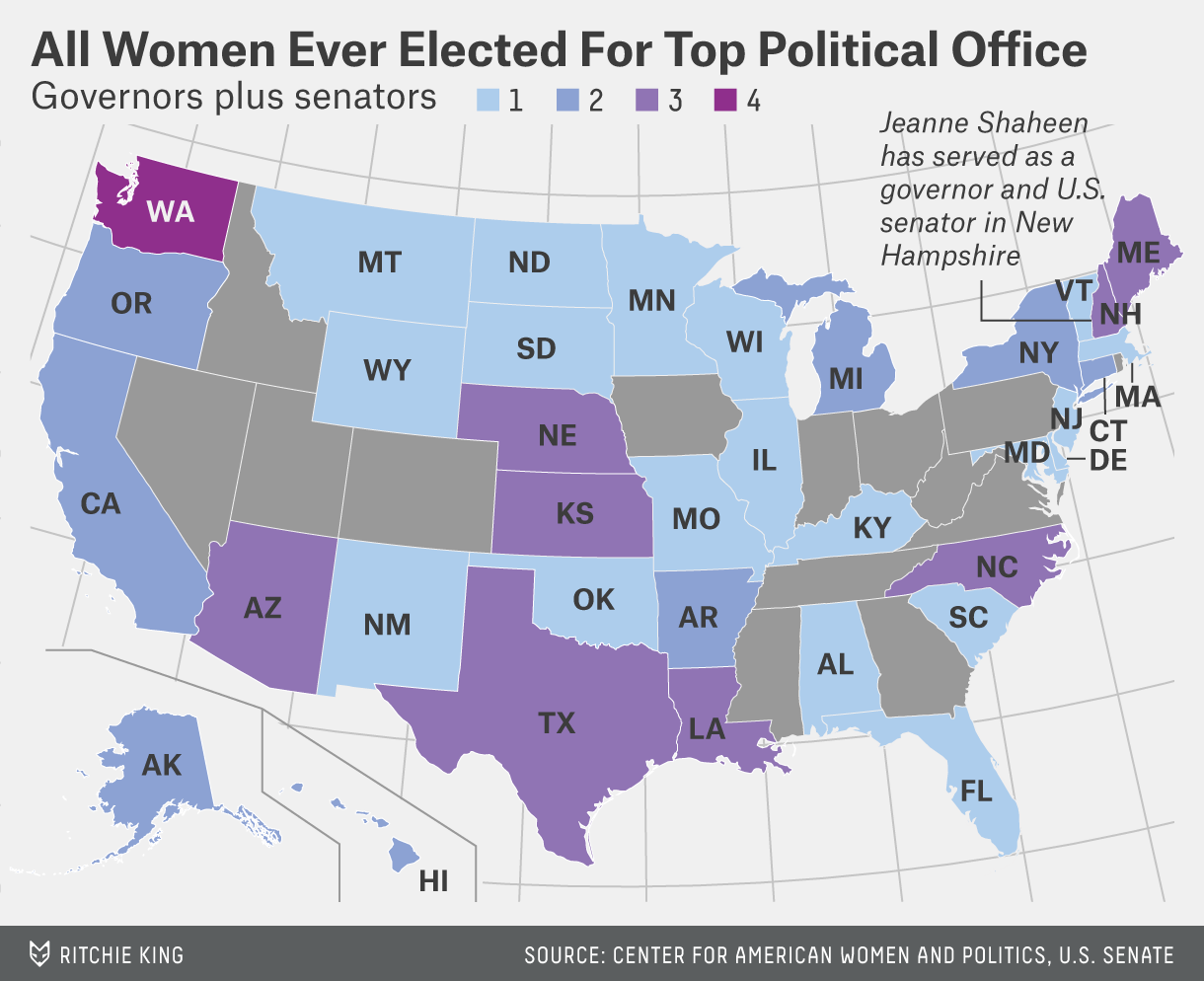 There are 14 states that have never elected a woman to serve as a U.S. senator or governor. There’s not a clear geographic pattern; a few states in the South and Mountain West, as well as a few in the Midwest and Northeast (notably Pennsylvania and Rhode Island), haven’t elected women to those positions.

Just 11 states have elected women to both offices.

Correction (May 20, 9:25 a.m.): A previous version of this post incorrectly showed Arizona as having elected two female governors; Arizona has elected three — Jane Dee Hull, Janet Napolitano and Jan Brewer. The maps and text have been updated.