I wouldn’t pay all that much attention to hints that people like Mark Halperin or Howard Fineman are dropping about the VP selection process.

Why not? Their sources are too good — meaning too close to the process. There are differences between information brokers, which is what someone like Mark Halperin is, and information seekers, which is more like what someone like Marc Ambinder is. In a process as tightly-controlled as the Obama VP rollout, the brokers might have more information than the seekers — but all of the information they’ll have will be things that the Obama campaign wants them to know. The seekers are more likely to learn something that they aren’t supposed to know.

With that out of the way, there is exactly one clue that I consider to be worth worrying about, and that is the timing of the announcement. It is now Friday morning at 1:12 AM Central Time. The Democratic convention kicks off in about 75 hours. The identity of the VP is not known. You can send up trial balloons, send out false information, bluff and posture and play-act as much as you like … but you can’t get that time back.

There is very little time left to roll-out and brand the candidate. As Stu Rothenberg notes, it is actually the norm rather than the exception to have the VP named relatively close to the convention. Still, there is cutting it close, and then there is leaving yourself no time at all. Geraldine Ferraro and Al Gore were named 4 days before the opening gavel at the convention, Lloyd Bentsen 6 days, Joe Lieberman 8 days, and John Edwards 20 days … so this pick will set the modern record for the Democrats, although the Republicans have sometimes waited even longer.

If you leave yourself with a candidate who hasn’t been adequately branded, you give yourself two problems. One, the Obama-Who? Effect, i.e. underscoring the fact that Obama is inexperienced and unknown. And two, the fact that the candidate won’t have the stature to draw large crowds on the campaign trail, or to maximize their exposure as a potential surrogate for you.

All of this points strongly to the known knowns: Joe Biden or Hillary Clinton. In the polling that Rasmussen conducted last month, these were the percentage of likely voters who knew enough about the respective candidates to have formed an opinion about them:

For comparison, here are some of the Republicans:

Google Trends reveals similar numbers: Clinton and Biden are well ahead of the other candidates: 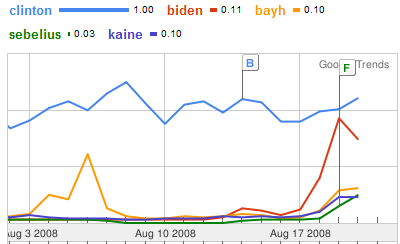 …and since Clinton was apparently fairly lukewarm in her support of Obama on the campaign trail in Florida today, that would tend to point toward Biden … then again, it’s not even clear that the candidates have been informed of their status yet.

BONUS: How the media will react to different choices:

Biden: Back-slapping approval. Media seems eager to play up Biden’s Scranton roots, etc., rather than his long tenure in Washington. This is a nontrivial element in his favor.

Clinton: Shock and awe. Mostly awe. Some people who felt used in the whole Biden/Bayh/Kaine wild goose chase might be a little bitchy. Buzz might last straight through the Republican convention.

Bayh: Disappointed. Choice will be seen as safe, unadaptive. The whole late roll-out and text message process might be portrayed as a gimmick. Low expectations for his speech, which might actually be his best chance to turn things around.

Kaine: “Obama going with his gut/heart/etc.” Obvious questions about experience, whether Kaine is too eager to please. Media may not know he’s a strong speaker, which could give him a chance to impress.

Sebelius: Bemused, wait-and-see. Hardest to predict, highest degree of difficulty. A lot of attention will be paid to her speech, the baton-pass from the Clintons at the convention.