During the summer, John McCain’s Reno office was struggling to attract volunteers. After he selected Sarah Palin as his running mate, there was a line of volunteers waiting outside the campaign office the following morning. Since then, they’ve gotten a solid 20 volunteers a night, though only four were there the night I stopped into the office. I was willing to believe the 20 figure, given the re-energized party since Palin entered the race. 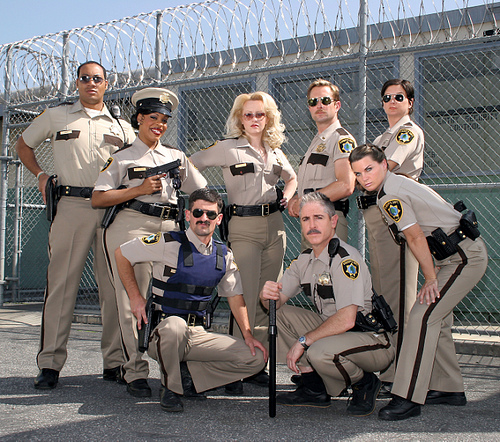 By contrast, Barack Obama’s Reno office has been humming for months. Though John Kerry won the city of Reno in 2004, he lost neighboring Sparks and Washoe County as a whole by 4.21%, or 6,704 votes. That represents just over 31% of his total losing margin (21,500), despite the fact that Washoe contributes only about 19% of Nevada’s statewide voting total.

In just the last year, Washoe County’s R-D voter registration gap has dropped from R +16,000 to R +5,000. The several months on the ground leading up to the January 19 caucus helped. That shift represents a lot of grinding, day-by-day work by organizers and volunteers to canvass and recanvass neighborhoods that can’t be crammed at the last minute. Here are the McCain and Obama Reno field offices.

Republicans, of course, have long built up grassroots and neighbor-to-neighbor infrastructure, so there is much less startup time when someone like Sarah Palin comes along to light the fuse. Republican volunteers told me that it’s simply part of the culture – doing your part during election cycles is just what folks do. I noticed organized tables lined with phones in the Reno office ready to accommodate a couple dozen volunteers. The Palin enthusiasm will undoubtedly help base turnout, but with Clark County looming as a given Democratic win, will the 11,000 gap-closing voter registration be too much a statistical factor to overcome?

Local Washoe Democratic grassroots activists really got underway here beginning in 2004. Effectively trained by the DNC 50-state program, they have been building party infrastructure by cleaning up voter files, identifying and staying in contact with Democrats to build for the long haul. While campaign organizers despise yard signs and other chum for the massive headachey hassle they represent (longer post to come on this topic sooner or later), the best argument I’ve ever heard for yard signs came from two local Washoe County grassroots-ers, who explained that a yard sign was an opportunity to easily identify another supporter who they could approach and who could then be kept active in between cycles. See a yard sign, meet a neighbor, fold them into the active grassroots ranks.

The analogy they offered about the presidential campaign was that it was like a freight train rolling through. The paid campaign organizers are younger and have an aggressive plan of action for the given organizing area. They hit the ground running. The grassroots folks are older, settled into their communities, and so both sides must work hard at communication so that everyone’s on the same page and everyone knows their roles. Ultimately, it’s a challenge that comes down to personalities, and organizers have the responsibility for making sure the existing groups feel both in the loop and listened to.

The more long-term developed the grassroots, the easier this is, and the less organized and the worse the state the voter file is in, the more control the campaign has to exert. In the end, it’s always dependent on the meshing of individual personalities. Happily for Obama supporters, it seems clear upon careful questioning that Washoe County grassroots and the Obama campaign are on the same page – though we might not find that everywhere we go. There are minor issues, for example grassroots folks wanting a little more lead time to organize for an event or a canvass; organizers of course often simply don’t get the lead time or are so overwhelmed with work that things don’t operate with perfect precision. In organizing, it’s never a perfect world, so the willingness of volunteers to compromise and roll with the punches is key to a successful ground campaign.

Housekeeping notes: We’ll be in Pahrump and Vegas later today, and then on to New Mexico, the Land of Enchantment. As a teaser, there are a couple new features we’re pretty excited about adding to this series, and they will debut over the coming days.