Scottish residents will go to the polls Thursday to decide whether they want to split from the United Kingdom. On many public policy questions, Scotland is already divided from much of Britain, which is part of the rationale behind the independence movement.

But just how much of an ideological outlier is Scotland?

I downloaded data for 23 questions on policy. I chose questions that cover broad areas of concern for Britain but don’t directly ask about Scotland or Scottish independence. The questions covered public benefits, the European Union, nuclear weapons, immigration, the death penalty, pollution and income redistribution (20 of the 23 can be found in the tables below). I then compared the data across the six regions the BSA uses to define Britain: Scotland, Wales and four part of England — Greater London, the South, the Midlands and the North.

This isn’t a definitive study of how Scots differ from fellow Britons. It doesn’t cover demographics, culture or history, such as the Battle of Bannockburn, part of an England-Scotland war whose 700th anniversary coincides — perhaps not coincidentally — with this week’s referendum (some have already cast their ballots). It also relies on a survey that only 284 Scots answered for many questions, and fewer for others that aren’t asked of the whole panel. Others might also choose different questions than I did. And the survey doesn’t extend north of the Caledonian Canal, which omits the northernmost reaches of Scotland.

Nonetheless, the BSA was about as good a tool as I could find to see how much Scots diverge from other Brits, and how that compares to division among the rest of Britain. For each question in each region and for Britain as a whole, I defined a net score. For example, for a question asking whether respondents would want to see more or less government spending on benefits for single parents, I added the percentage of people who said they’d want to see “much more spending,” and of those who said they wanted to see “more spending.” Then I subtracted the percentage of respondents who chose “less” or “much less.” Scotland’s net score was 28.9 percentage points. In Britain overall, it was 11.9 points.

For each question, I calculated the absolute value of the difference between Scotland’s net score and every other region’s. Then I averaged that gap for each pair of regions, over all 23 questions. I found that Scotland differed, on average, by about 8 percentage points from Greater London, 9 points from Northern England, 11 from Wales, 12 from the Midlands and 13 from the South.

I then calculated the same gaps for every pair of regions: How much do Greater London and Wales differ, for instance? How about the South and the North?

Nearly every other region’s most distant ideological neighbor was Scotland. The gap was largest for the South, which was 13 percentage points apart from Scotland, on average, but placed within 9 points or fewer relative to every other region. The one exception was Greater London, which was closer to Scotland than to the South and the Midlands — the two regions that are closest to Greater London.

Scotland is generally more liberal than the rest of Britain, but the regions don’t split along obvious ideological lines. For example, Scottish and Welsh respondents were in close agreement on benefits: They wanted to expand them. But they were sharply divided on pollution and cars (Scots were much more supportive of road-use savings for drivers of cars that are better for the environment), immigrant rights (Scots were much quicker to grant immigrants benefits and voting rights) and the death penalty (the Welsh favored it as a punishment in at least some cases much more strongly).

For each question, I also evaluated what the Scottish answer was — whether the net score for Scottish respondents was above or below the net score for all British respondents. Then for respondents from each of the other five regions, I counted the number of questions for which they gave answers in the same direction as the Scottish answer. For instance, Scots were more anti-nuke than average, and so were the Welsh and Londoners, but everyone else was more pro-nuke than average.

By this measure, Greater London was the most Scottish part of Great Britain. The South lined up with Scotland on just two questions, and the Midlands on just six. The North agreed on 11, and the Welsh on 12 — just over half. But Greater London agreed on 21 of 23 questions.

So, why was the average divergence between Londoners and Scots not much smaller than the ones between Scotland and the other regions? In part because Londoners were more of an outlier than the Scots.

Geography and history militate a breakaway Scotland-London republic as much as, say, a California-New York one. And London is hardly the only capital that is far more liberal than the rest of the country. But on policy preferences, Scotland and the home of the government it might reject Thursday have more in common than many other regions between them. 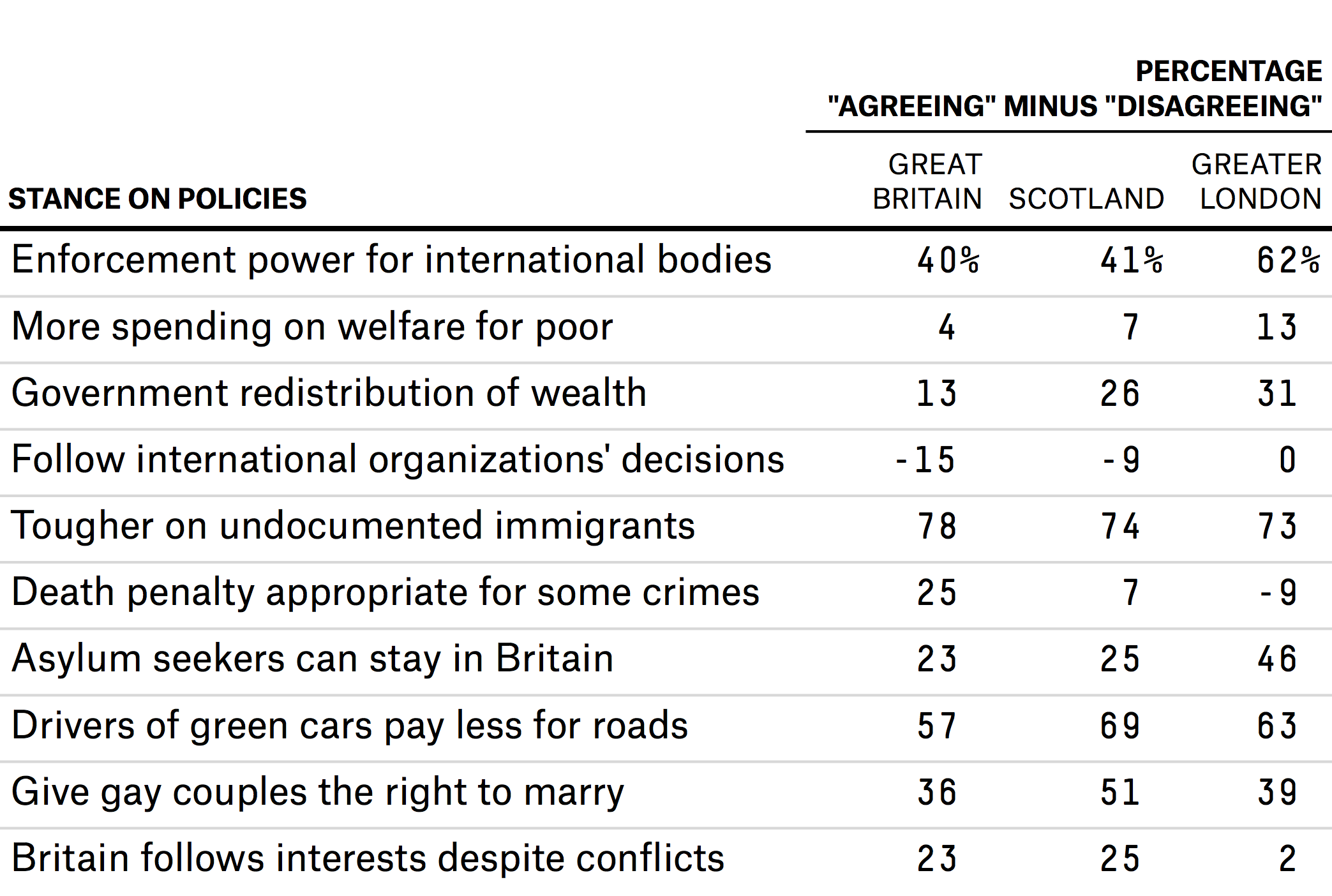 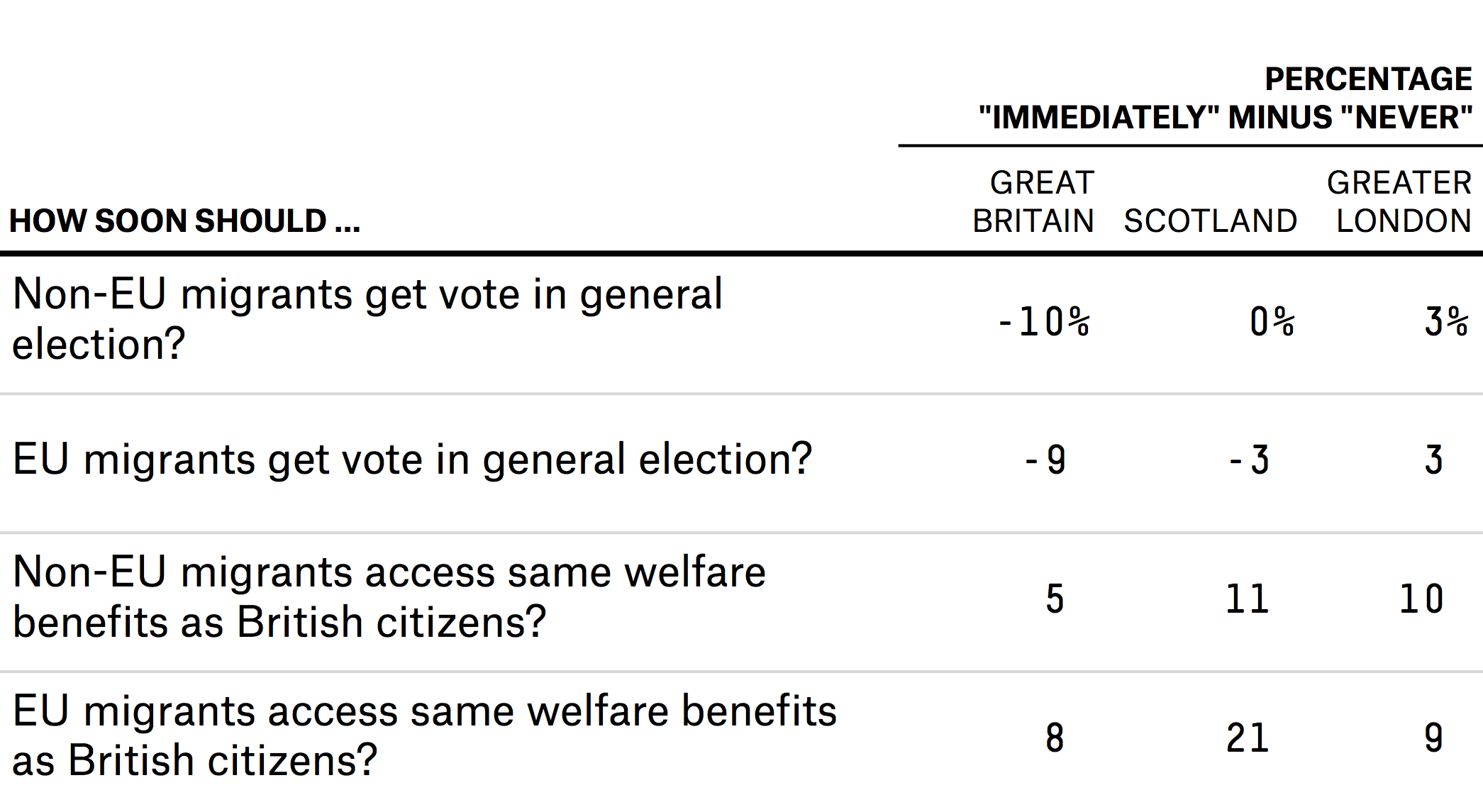