In today’s VP speculation thread, I had the following to say about Hillary Clinton as a prospective running mate for Barack Obama.

Boy, would this be dramatic. And perhaps exceptionally smart. I think Obama might get an immediate 10-15 point bounce if he named her. But I don’t know how well she’d hold up after coming under attack in September and October — remember, she hasn’t really been the subject of a negative campaign since late February, when the Obama folks decided they had the nomination locked up and started to play it safe. It’s a crazy scenario, but the whole Obama veepstakes has been crazy enough that I wouldn’t rule it out.

Armando at TalkLeft takes issue with my statement:

Emphasis supplied for sheer incredulity. How would Hillary hold up under negative attacks? Are you freaking kidding me? This is an open question for Poblano? Sheesh.

#1. An analysis of press releases that I conducted in May suggested that there were in fact virtually no negative attacks on Clinton from March 1st onward, at least not originating from the Obama campaign, the McCain campaign, or the RNC.

Clinton’s incoming hits peaked in January, and have since dwindled basically to nothing. She hasn’t been the subject of either an RNC or a McCain press release since March. Overall, since March 1st, Obama has taken 151 incoming hits, McCain has taken 144, and Clinton has taken 9. 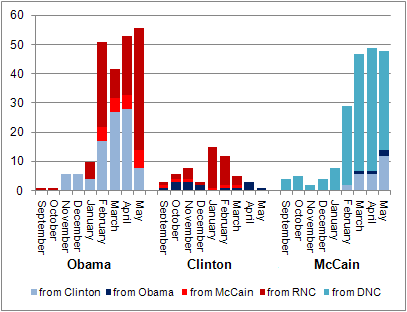 #2. How did Clinton fare when she was the subject of negative attacks, such as during December, January, and the first part of February?

Her numbers against John McCain were quite poor. She was consistently trailing him by approximately 3 points in the Pollster.com averages during this period. Her numbers improved only AFTER the negative attacks stopped in March and April. 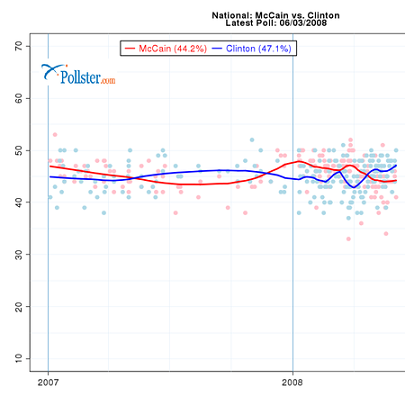 I have come around on Clinton. I think she would at least be a decent VP choice for Obama, and possibly an excellent choice.

But let’s not get into revisionist history. She remains a candidate with significant negatives and, when those negatives were being leaned upon, her electoral position was vulnerable.

UPDATE: Steve Clemons, who posted that odd item on Wesley Clark on Saturday, reports that a decision has been made on the VP slot. He says it WON’T be Bayh, Daschle, Reed, or Clark. He thinks Joe Biden is the most likely choice, with Kaine, Hagel and Sebelius still possible but less likely. And he thinks we shouldn’t discount the possibility of Clinton, Gore, or Kerry.