Let’s take a look at at a chart: 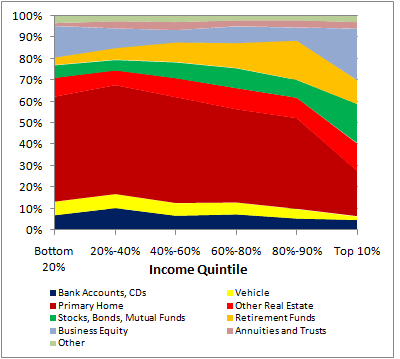 This is the proportion of various types of assets held — everything from property to cash to stocks — as a percentage of total assets for Americans in various income categories. The data comes from the Federal Reserve Board’s 2004 Survey of Consumer Assets, which is probably the best data our government produces on consumer behavior. (Unfortunately, the Survey of Consumer Assets is conducted only once every few years; the next release is scheduled for early next year).

The most obvious trend is that higher a person’s income, the less a proportion of their wealth is tied up into their homes. People in the bottom three income quintiles had roughly half their total wealth embedded into their principal residences, and another 8-9 percent in other forms of real estate. By contrast, the top 10 percent of earners had just 21 percent of their assets in their residences, and another 13 percent in other categories of real estate (including second homes).

We can also look at this in a slightly different way, comparing the various types of assets held to annual income: 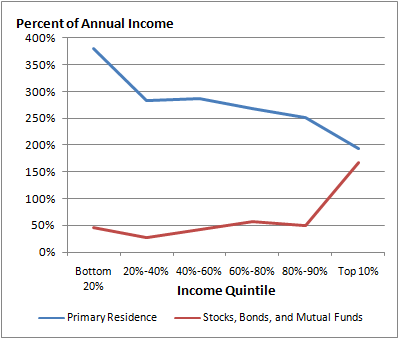 Lower-income Americans have nearly four years’ worth of annual income tied up into their homes, and middle-income Americans between two-and-a-half and three years’ worth, as compared with only about two years’ worth for the wealthiest Americans. By contrast, wealth in securities rises dramatically among the richest 10 percent of Americans, not just in absolute terms but also relative to their incomes.

If this person’s securities lost 25 percent of their value, then she has lost the equivalent of 6 or 7 weeks’ worth of takehome pay. By contrast, if the price of her home drops by 25 percent, she has lost the equivalent of almost a year’s worth of takehome pay — actually, somewhere between 10 and 11 months. It isn’t any surprise then, that for both rational and behavioral reasons, she’ll want to cut back on her consumption a little bit when this occurs.

Now, I don’t mean to sanctify homeownership to any extent — I’m a renter myself, and proud of it. But this isn’t really an argument about homeownership. Rather, it represents a relatively unique natural experiment about the relationship between wealth and consumption, since we haven’t had a truly major, nationwide decline in American housing prices since World War I.

What the experiment suggests is that when the housing market declines, it can trigger a precipitous decline in consumer spending, potentially enough to send the economy into a tailspin. The steepest decline in housing prices came between November 2007 and this March; the NBER, perhaps not coincidentally, now dates the recession back to last December — long before the Fannie and Freddie takeover or the collapse of Lehman Brothers. When the stock market crashes, by contrast — particularly in a case like the 1987, when the crash wasn’t really tied to broader economic fundamentals — the effects on consumption have tended to be fairly negligible.

The primary difference between housing wealth and securities wealth is that the latter is concentrated almost exclusively among the wealthy, whereas the former affects persons in all income classifications. One inference we could draw from this, then, is that a robust middle class is indeed the engine of American growth.

If this inference is correct, then a principal goal of our recessionary fiscal policy should be to encourage consumption and improve consumer confidence among the middle class. The two most intriguing ways to do this are probably a reduction or suspension of the payroll tax, and some sort of sales tax holiday in which the federal government would foot the bill for state and local sales taxes for some period of time. By contrast, a reduction in something like the capital gains tax rate, as was proposed by the McCain campaign in October, would seem to be about as orthogonal to our current economic problems as could possibly be.